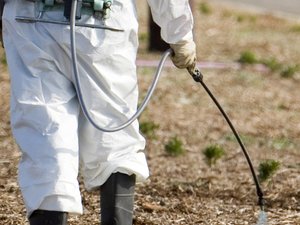 The use of glyphosate based, total weed killers have been banned for use by the South Dublin and Leitrim County Councils. The use of the chemical will no longer be permitted in public areas with local councillors citing glyphosate as a risk to both the public and council workers.

There is concern in the EU over the future of the chemical weed killer in farming with such bans already put in place in Germany and France now looking likely to follow suit. Back in May, the South Dublin County Council also voted to ban the spray of glyphosate in public areas. Leitrim County Councillors have now unanimously backed a motion to ban the use of glyphosate weed killers in all public areas after acknowledging an online petition that had received up to 1,400 signatures in support of the ban. The growing concern from the public being the chemicals potential environmental risk to native wildlife and waterways.

“Senior Engineer with Leitrim County Council, Shay O’Connor, told the meeting that Council staff would now cease the use of glyphosates in public places in Co Leitrim. He said staff will also speak with local community and Tidy Towns groups with a view to also stopping their use of products containing this ingredient in public places.”

Japanese Knotweed, an aggressive, destructive and invasive plant, is a huge issue that people turn to glyphosate products for a solution. Spraying the affected area with a glyphosate based product is the most common solution for treating Japanese Knotweed. Unfortunately, this method requires a high dosage and the problem will not be eradicated after just one dose, it will require repeated sprays to completely eradicate. A much cleaner and almost certainly more effective solution, is stem injection using a high concentration of glyphosate. Products containing the key ingredient triclopyr, like Icade Herbicide, which does NOT contain glyphosate, is also a very effective control with routine spraying.

Potential home buyers have in some cases experienced difficulties securing a mortgage on a property if it’s affected by Japanese Knotweed. Cllr Justin Warnock, Fianna Fail, seems to have found organic methods of treatment for the tricky invasive weed, but is keeping it to himself it seems;

“Cllr Warnock also asked the Council to look for an alternative method of dealing with Japanese Knotweed, stating there are organic methods of treatment which have proven just as effective as glyphosates.”

What are these organic methods, place a eucalyptus candle at the base of the weed and say three Hail Mary’s backwards? Where is the research?? Who carried it out??? Seems like a bit of a throw away statement from Mr. Warnock, and throw away statements like this and inconclusive research and studies are a concurrent theme around the glyphosate debate. Reports and studies are still unclear and contradictory;

“International Agency for Research against Cancer (IARC) in 2015 concluded that glyphosate was probably carcinogenic to humans, but was followed by another from the European Food Safety Authority that said glyphosate was “unlikely” to cause cancer.”

These mixed research results are helping nobody. Glyphosate needs to be properly investigated but meanwhile, the European Commission currently planning a 10-year license renewal for glyphosate. At the end of the day, if it is unsafe, it should be discontinued, but decent alternative solutions have got to be found because glyphosate is a solution to a legitimate problem that is not going away anytime soon.

Glyphosate is a hazardous chemical and when spraying any pesticides or herbicides, you have to take your personal health and safety seriously. Basics like a respirator mask, coveralls and gloves are not optional and you are required to have formal training in the safe use and application of pesticides before applying professional herbicides.

To become a Professional User registered under the Sustainable Use of Pesticides Directive, check out The Pesticide Registration and Controls Divisions and the Pesticide Control Laboratory of the Department of Agriculture for more information.