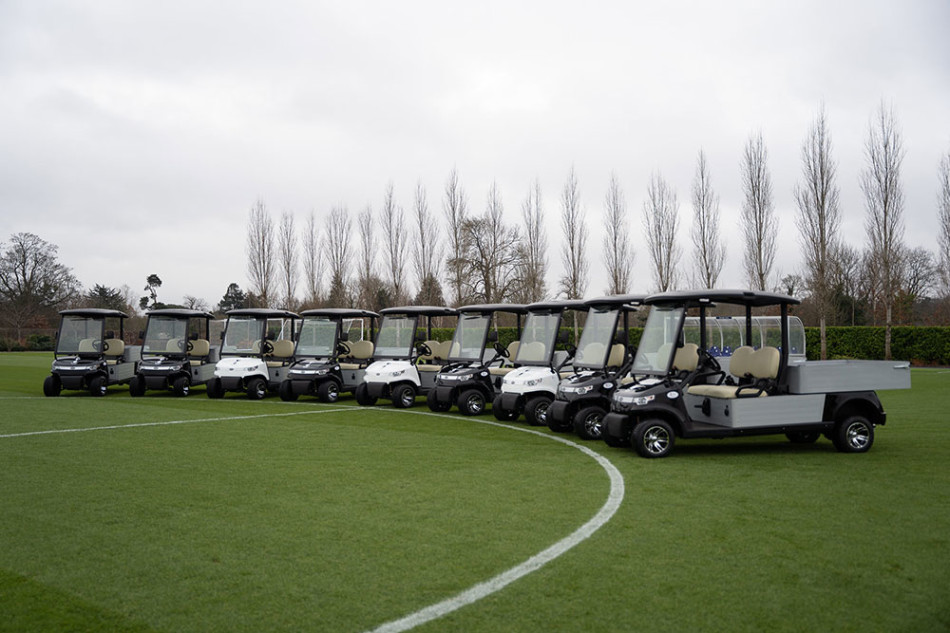 The Training Centre plays host to all of its teams, from the U8s through to the U23s plus both Men’s and Women’s First Teams. In addition, the Club regularly hosts international teams including England on numerous occasions. Head of Playing Surfaces and Estates, Darren Baldwin knew he needed a capable and versatile range of utility vehicles to rely on. All while being electric.

He says: “We were looking for a brand that could rival the highly productive ‘mules’ in the utility vehicles category that are petrol and diesel. It would have been a hard hit to sacrifice productivity for being electric, but with STAR EV we haven’t had to.

“These machines have brought everything we need and more to the role of what a utility vehicle support fleet should do. We have an 80-acre site and a wide range of jobs that need doing, so these machines need to perform. We haven’t had a case when they haven’t.”

The combination of a 48V 5kW AC motor, a 210Ah Lithium-Ion battery and a carry capacity of 670kg have particularly impressed Darren: “They are market-leading when it comes to towing capacity, and the amount of payload they can handle competes with all the others we’ve ever used.

“Whether it’s lugging mannequins, balls and airbed walls for training around the campus, fulfilling housekeeping duties for the 46-bedroom lodge or supporting the grounds and gardens maintenance team, these workhorses have proved they can do all we need them to. They’re easy and comfortable to use, and quick too.”

But what about the practicalities of using an electric fleet? Darren confirms there’s no need for concern about using battery-powered machinery across such a large site with the app they all have access to: “It’s really easy to tell via the app what the battery life is so there’s no chance of ever getting caught out, but to be honest the charge time is so good I highly doubt that could ever happen despite the size of the venue.

“The buggies give an easy 50 miles per charge and it’s a real selling point for us that they only need one charge per week on average. The fact that charge can be done by a three-prong 13-amp plug, with 10 buggies across three charging stations, really puts them apart from the competition.”

In fact, Darren is so impressed with the performance he and the team has experienced so far, he’s planning on placing another order to make the club’s entire buggy fleet STAR EV. He says: “We started with 10 machines, but we’re already talking about adding to that and making the whole fleet STAR.”

To talk to Reesink e-Vehicles about the STAR EV range, call 01480 226800 or go online at reesink-evehicles.co.uk