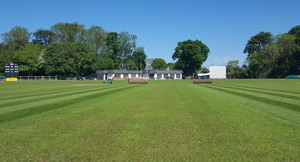 I took a trip out to Malahide to have a chat with a good friend of Pitchcare Ireland, Phil Frost. Phil is the head groundsman of Malahide Cricket Club and he is saddled with the task of maintaining the pitch, keeping it in perfect playing condition for a host of club teams as well as keeping the pitch in an immaculate state to host International cricket for the Irish cricket team.

On a glorious morning in July, the pitch at Malahide cricket club was a beautiful sight. Situated in the stunning surroundings of the Malahide Castle grounds, it’s not hard to see why Cricket Ireland chose it as the home of international cricket in Ireland and have invested a lot of money into it. Since 2012, the club has hosted international Cricket games against England twice, Scotland three times and a few World Twenty20 games. The England game in 2013 took in an attendance of over 10,000 people, the largest attendance ever to witness a cricket match in Ireland. 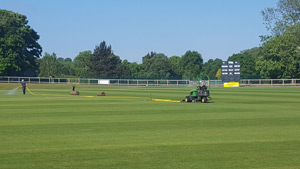 “I worked in Somerset for 34 years and the biggest crowd we ever had in was 7,500 for India v Sri Lanka!!” Phil tells me, when talking about just how big the England game in 2013 was. Phil Frost has been in the turf care industry for nearly 40 years. He spent 34 years, building himself a reputation as a top cricket groundsman in Somerset County Cricket Club. In 2010, he became the head groundsman for Portsmouth Football Club. “I’d go back to football tomorrow!” Phil joked, “So much easier than cricket, it’s not so governed by weather”. Phil tells me that he enjoyed being a football groundsman, but with the well documented financial trouble that Portsmouth FC found themselves in, the work never felt 100% secure. In 2013, the reputation that Phil had built for himself, led to him being offered the head groundsman job for Cricket Ireland and so Phil headed out to Malahide to take on his current endeavour.

As I chatted with Phil, we took a walk out onto the cricket pitch. The first thing that stuck out to me was the cricket square. Relayed in 2012 in preparation for the England game, the wickets look in supreme condition. The international wickets are marked by yellow tees, they look ready to be played on today. Phil tells me that he is very happy with how quick the growth comes back after play and he believes that this is down to using sheets and covers.

“There is a huge amount of cricket being played on the ground, with five men’s club teams, the women’s teams etc. and the key to the whole thing is getting the wickets prepared as quickly as you can. Now because of the sheer volume of cricket that gets played, the grass gets kicked about so much and isn’t given a chance to grow.” says Phil. He showed me an example of a wicket that had a sheet left over it throughout the night and how the seed had actually germinated overnight. 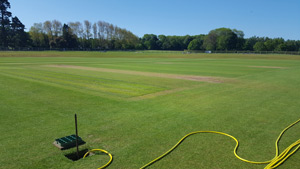 “Cricket is a grass sport, it’s not supposed to be played on dirt”. Phil makes a point of keeping a level of grass on the wickets. Phil takes the grass down by sight rather than sticking to a pre-determined rule of thumb measurement and he always leaves an even cover of grass, “Always try leave grass on the wicket, they will wear out much faster if you leave no grass on the wickets.”

Ireland play Sri Lanka on the 16th June and then Pakistan on 18th August, so how is Phil preparing for the upcoming international games?

“Well, we have two wickets being prepared for the two games and I am hoping that they will be able to use the same one twice. The wickets have been cut down, watered for about a day and have had about two hours rolling on each”. Phil goes on to tell me he can’t really start preparations until club cricket in the Malahide Cricket Club comes to a close, “The total rolling for the international pitches will total between 11 to 14 hours for each pitch. I am going to keep the wickets pretty grassy and protected by coco mats right up until next week and then it’s all systems go!”

I asked Phil if there is any trouble with regards pests, weeds and disease; “We have been disease and pest free for the past two year now”, Phil credits this run of disease and pest free bliss to his use of a bio stimulant called Maxstim Sport, Phil tells me he has seen some great results and improvement through using the bio stimulant. “Moss is a bit of an issue, being a parkland close to the sea, but Ollie gives me a dig out with all that”, Pitchcare Ireland and Sportworks very own, Ollie Ennis looks after the verti-draining and spraying for weeds and moss for Malahide Cricket Club. 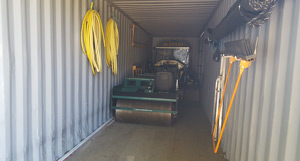 I asked Phil, if he could add one new machine to his arsenal, what would it be?

“To be fair, Cricket Ireland have got me everything I have requested off them over the last 3 years! I think what I would like, is access to a spiker all the time. The spiker I currently use is shared between us and three other clubs. Hiring a spiker can be annoying as well, because, and this happened a lot in Somerset, you can almost guarantee its going to rain just when have hired it in!”

So, as Phil says, ‘It’s all systems go’ now as far as the ODI international crickets games are concerned. Phil and the Malahide Cricket club are ready for it.