After serious flooding at Blackfinch New Road, Worcestershire CCC's head groundsman Tim Packwood faced new challenges as he prepared for the new season with a shrinking team and a set of Covid protocols. Jane Carley met up with him as play finally got underway again. 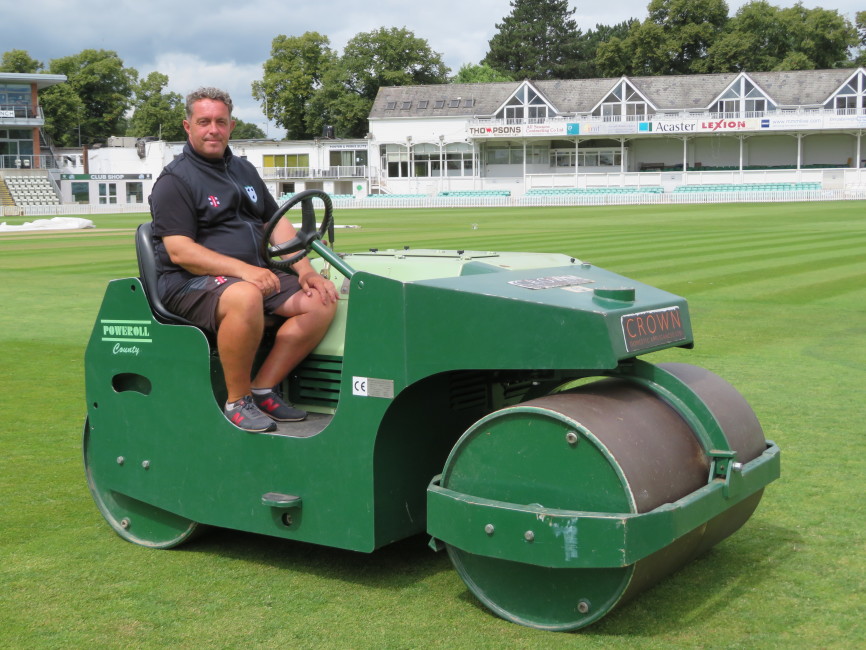 They say that a week is a long time in politics, but three months is a lot longer to be looking at an eerily quiet cricket pitch, unsure of when play will begin again.

This is the dilemma that has faced cricket groundsmen up and down the country who, as sport has gradually got up and running again, find themselves in a whole new world of social distancing, 'bubbles' and temperature checks.

When we last spoke to Tim Packwood at Worcestershire County Cricket Club back in March, Britain was on the brink of lockdown, but a bigger concern was how to prepare for the new season - if it happened - with a ground which had only just emerged from its worst flood for twelve years.

Sited on the flood plain next to the River Severn, the club is used to flooding at its Blackfinch New Road ground, but autumn 2019's renovations had been obliterated by an earlier-than-expected deluge, and the pressure was on to get the pitch into shape for whatever sport was to come.

"Whilst we have small machinery for individual wickets, we use contractors for the square. Carrick Sports were lined up to come in the Monday after lockdown, but were forced to cease operations by the Covid regulations," explains Tim.

It was time for Plan B - tractor mounted scarifiers were loaned by Warwickshire County Cricket Club and Worcester Royal Grammar School and a disc seeder from Kings School in Worcester and the work carried out by Tim and his team. 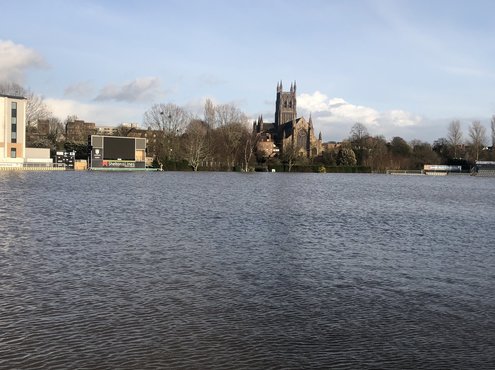 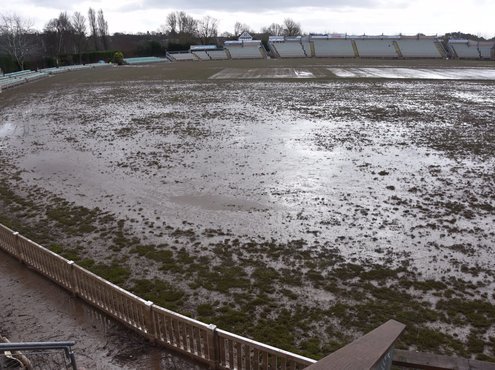 The ground underwater earlier in the year. There was so much silt washed onto some areas, the groundsmen were forced to break it up and use it as topdressing! / As the waters began to subside in March, just when pre-season work should have been in full swing

"The next challenge was how to transport them to us, but we were helped out by Richard Ding of R&D Plant who look after our own machinery. The company also provides our winter storage, so we had machines that we needed to get back from its premises too."

Impressively, the renovations - scarification, seeding, fertiliser and topdressing - were completed by 31st March.

"We generally only use a light topdressing to get into the scarification lines and cover seed, but the levels had been lost in some places due to being underwater for so long, so this also needed addressing. With little idea how much, if any, cricket would be played, and also of how finances would be affected, the goal was to prepare to ECB standards," explains Tim.

The outfield was finished on 5th April, with the scarifier doing extra duty removing silt washed into the ground from nearby farmland. "There was so much silt in places, we broke it up and used it as topdressing." 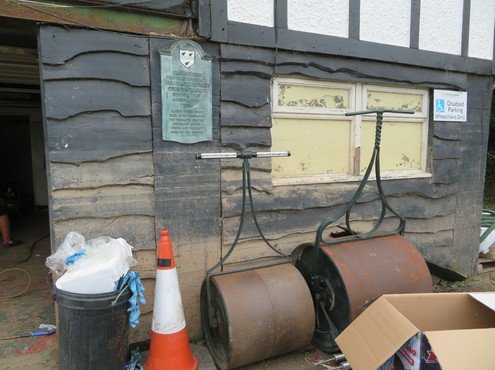 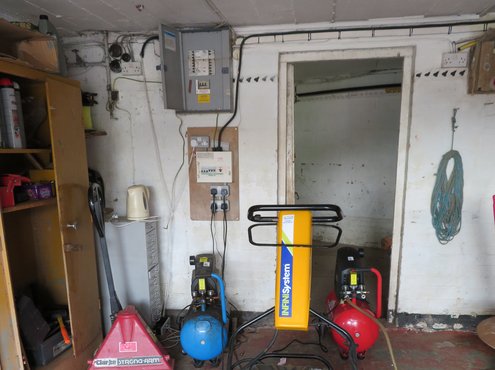 Just nine weeks later, with plans for a return to professional cricket looming, preparations on the square began.

"It was very early, but we just didn't have the time window offered by completing renovations in the autumn," he comments. "Worcestershire was one of the first clubs to bring back furloughed players and, whilst it added to the pressure, it was good to see them and gave us something firm to work towards."

There had been no time for renovations in the net area, which had simply been maintained, so nets and bowling areas were set up in the centre and further practice areas on the outfield.

Thoughts of trying a new seed mix were quickly discarded, with the reliability of local supply of the tried and tested mix from Carrick Sports more important.

Ironically, after all the flooding, the dry spring was now causing problems.

"We had just 15mm of rain, and there was that really hot spell in the middle," Tim recalls. "We haven't historically needed to water much in the summer so have no pop-up sprinklers at the moment and having fitted a booster pump to the water system I was moving sprinklers by hand between mowing runs!" 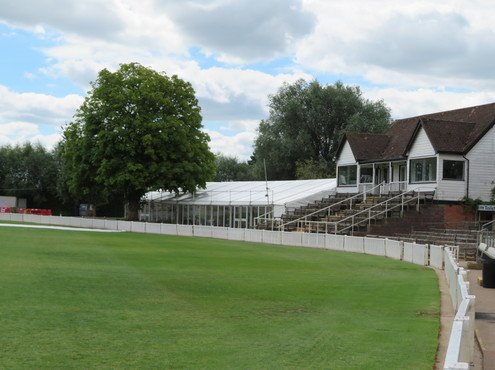 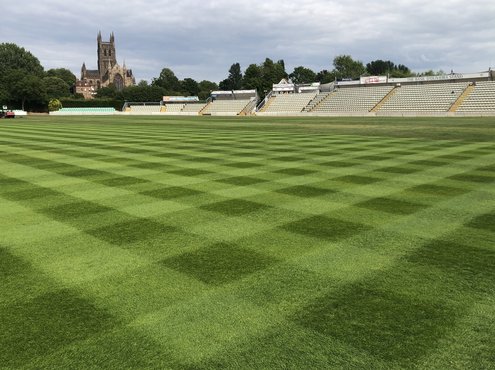 Wettest part of ground / Mown and almost there on 9th June

By this time, Tim was working largely on his own - the club had kept on a skeleton staff from 14th March to 13th April, but then furloughed the three groundsmen.

"It was actually enjoyable to be more hands-on, and I ended up doing the majority of pitch preparations myself. But, without the matches, I was still working shorter days."

The peace and quiet soon ended with the news that Pakistan would be coming to Blackfinch New Road to train in eleven days.

"We were all very pleased - it was a boost for the club and proof that we are not a 'one trick pony.' We provided a 'bubble' for the squad, who were staying in the Premier Inn next door, accessing the ground directly from the hotel and being provided with all their meals by our caterers. It was very successful and we hope there will be demand from other overseas squads in the future."

Tim and other club staff - plus the rest of the grounds team before and after furlough - had already proved adept at social distancing, but the 'bubble' protocols took it to another level.

"We were not allowed within 20m of the players so, if we needed to get them off the field, we'd have to use the horn on the tractor to get their attention. It took a bit of getting used to and we made liberal use of What's App to communicate." 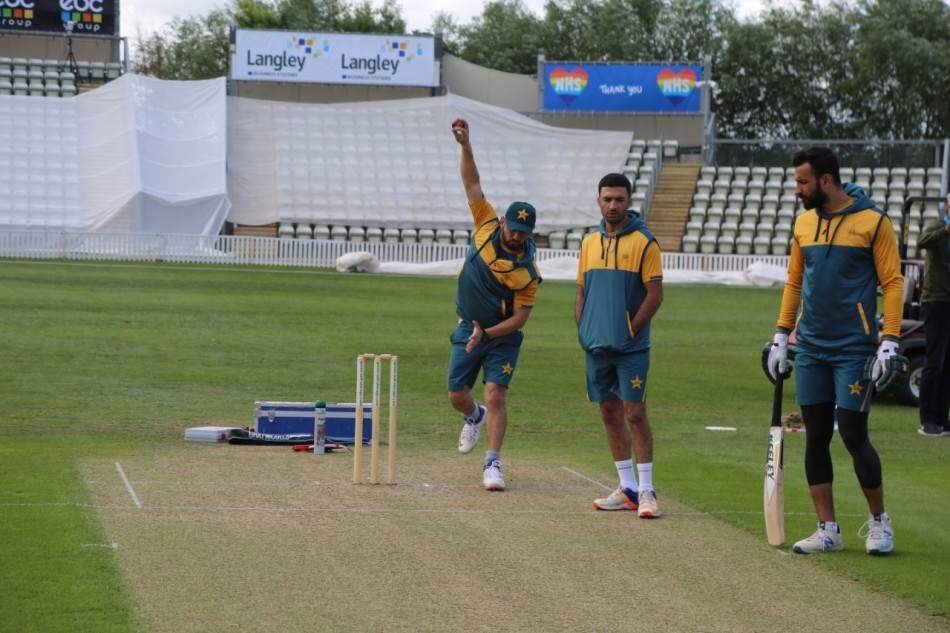 The Pakistan squad spent a fortnight training at Blackfinch New Road in July. With the help of the Premier Inn next door, the club was able to provide a Covid-secure 'bubble' for the squad

The club's players transferred to nearby Kidderminster to continue training during Pakistan's visit, having also used this ground for a week before returning to Blackfinch New Road in June.

At the start of lockdown, work plans were submitted to the club's Covid officer to formalise social distancing, and the protocols are still in place - the mess room is off limits due to a narrow corridor, with hospitality boxes deployed for breaks. Each member of staff has a daily temperature check and has to complete a three question health check on What's App before coming into work.

"From the first week of the pandemic, if a player had left his bags or even a bottle of water in an area where we wanted to work, we couldn't touch them. No-one realised how long it would last, but it has become normal practice now."

"When just two groundsmen are working, it's easy, as we have two rollers and two tractors which are assigned to different members of staff. With more staff now back at work it's more difficult, but we disinfect everything regularly and just have to remember that you can't jump on and off any tractor."

Plans to recruit a fifth member of staff have been put on hold, and Tim 'borrowed' a groundsman for the first week of the Pakistan fortnight, only for his assistant to break his wrist, taking them back down to a team of three again. For labour-intensive jobs such as covers, a member of the bar staff has helped out. 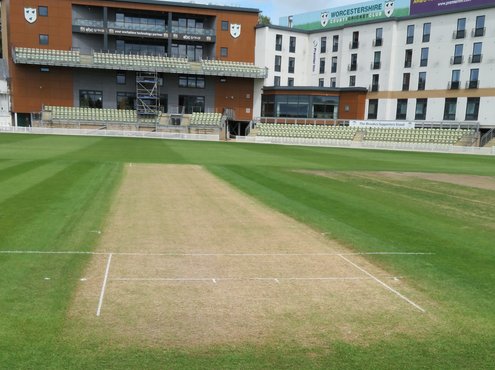 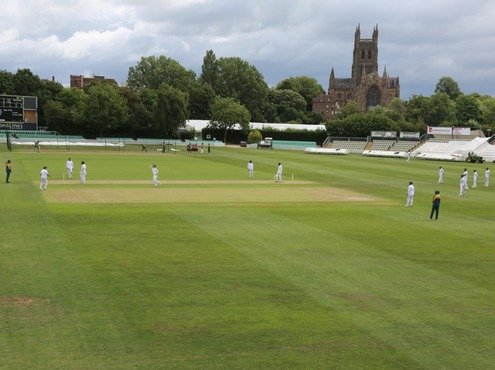 "As we work outside, we're in the best situation but, if we have to come closer than 2m, we will wear masks. The only time that it's likely would be to roll out new sheet covers for example," he says.

There may be a few head-scratching moments as play resumes however - only umpires will be allowed to touch the stumps, so if the stumps are not pulled during a bad weather interruption it could be difficult to put the covers on!

"We're not supposed to be on the field when the players are on, so the onset of rain could require some quick action."

The first fixture scheduled was a 'neutral ground' match for Lancashire vs Leicestershire, ahead of the home squad return to Blackfinch New Road on 8th August.

The season may be extended for the Bob Willis four-day matches into the first week of October, with a 'neutral ground' club hosting the final.

"It's not ideal because we will be wanting to get on with renovations but, if spectators are allowed later in the season, it would be very positive for the club and we will obviously support it." 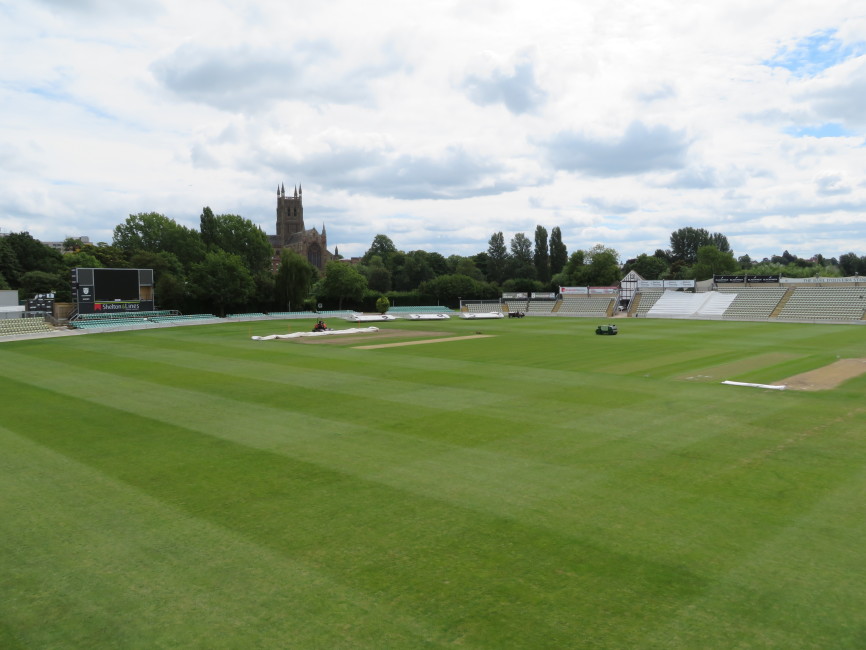 Tim suggests that budgets have not been affected significantly, although fertiliser is only being bought in as needed for each application.

"We know it would be cheaper to buy in bulk, but we can't store it due to our winter flooding issues. One impact of the pandemic is that we have rethought our machinery policy, and intend to purchase our own renovation equipment in the future to reduce our reliance on contractors, so we are now actively seeking off-site storage."

"We'll generally topdress the outfield at the end of the season, but for 2020/21 we will focus on getting the grass cover and top dress in February if needed - so much topdressing was washed away this year. However, the square will be renovated in the autumn to give it the full growing season."

Other plans include making the ground as 'flood ready' as possible after the mess room electrics were damaged in winter 2019, and refurbishments to public facilities as and when they are needed.

When asked of any positives that have come out of this most unusual of seasons, Tim comments on the improved communication between county cricket groundsmen.

"Gary Barwell at Edgbaston set up a regular zoom meeting and it's been very helpful - we've all come together much more for the sake of the sport."