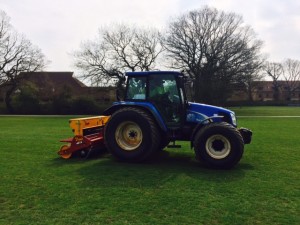 In former years, Area Team Leader Rob Jarvis would plan to overseed the Districts 26 pitches at the end of May. Taking advantage of a short time slot before the football season commenced and the pitches were back in full swing.

However, the way the Vredo Compact Overseeder works has changed that, as Rob explains "The Vredo system works by placing the seed directly into the ground. We can determine the depth ourselves and calibrate the amount of seed used. Because of the accuracy of this method and the high germination rate anticipated we have altered our overseeding program. We have reduced the total volume of seed and now split the applications into two. We seed the pitches once early in the year and then again in the autumn. As we are reliant on the weather for watering in, planting the seed beneath the soil is vital to ensure the high germination rate. This in turn reduces potential waste and so we can build the strength of the pitches at the beginning of the season and at the end."

Rob and his team complete the overseeding programme during a two week period as part of a general maintenance regime. They also apply additional seed and top soil in the goal areas when needed throughout the season.

He considers the future positively "The Vredo will help keep our pitches in action, it will also improve the overall condition of the surface and keep them healthier with a stronger sward, for longer."

The Vredo was supplied through local machinery dealer Ernest Doe & Sons Ltd and fully commissioned with the help of Campey Turf Care Systems.

"The joint induction was excellent, said Rob "The Parks and Open Space Team have 28 operatives, four of which use the Vredo and they have found the Vredo extremely straight forward to use and maintain."

Vredo Compact Seeders feature a Double disc system for precise seed delivery. Due to the unique action of the Vredo seed application, the grass seed is placed in direct contact with the soil, giving almost total seed germination.