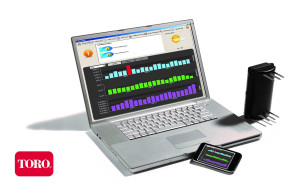 As Britain's football and rugby seasons near an end, irrigation experts at Toro are urging club groundsmen to consider Turf Guard when planning pitch improvements for the upcoming 2015/16 season.

Robert Jackson, irrigation manager at Toro's sole UK distributor Lely, explains more about the key benefits Turf Guard will bring to stadiums across the UK and Ireland: "The Turf Guard system is a revolutionary technology that lets you know what's going on beneath the surface of your pitch, so you can make timely, more-informed adjustments.

"One of the best things about it is that there's no wires, which means that sensors can be installed anywhere on your pitch without causing major disruption," Robert says.

Once in the ground, each sensor accurately measures moisture, temperature and salinity levels of your soil at two depths, in real time. That data is then collected and compiled into easy-to-view and understand tables, graphs and dashboards, and can be accessed from any Internet-connected computer by connecting to the system's web-based interface.

"You can even access your sensor information from a web-enabled mobile phone," Robert adds.

"The reduction in water usage is also a huge benefit. You can improve your playing surface without risking turf quality. It allows you to promote root growth by avoiding over-watering and detects dry areas before the turf's health is impacted," he says.

Hampden Park, one of Scotland's premier football venues, is one of the first stadiums to be fitted with Turf Guard.

Since the new system has been in place, head groundsman Stephen Bache has reported an increase in flexibility, both in terms of pitch maintenance and water usage.

He says: "I wanted more flexibility than the previous irrigation system could deliver, so specified the latest Toro Lynx controller. Integrated with TurfGuard sensors that monitor temperature, moisture content and salinity in the playing surface, I have the tools to master the management and maintenance of the playing surface."

Coinciding with the introduction of Turf Guard, Lely is also running a promotional offer with any new purchase.

"As the season draws to an end, now is the perfect time to start thinking about pitch management improvements," says Robert. "As such, if you order your Turf Guard sensor between now and 31 May, we will replace all perimeter sprinkler heads for free."

The offer, available to stadiums in the UK and Ireland, includes a maximum of 16 free Toro perimeter sprinkler heads, which must replace Rain Bird 900 and Eagle Series, and older Toro sprinkler heads only. Orders must be made before 31 May and include a minimum of one base station, four sensors and one repeater.