0 The UK's most invasive plants

Nothing is often more irritating for gardeners that a plot that is blighted by an invasive weed. Below is a selection of plants which DEFRA classifies as the most invasive 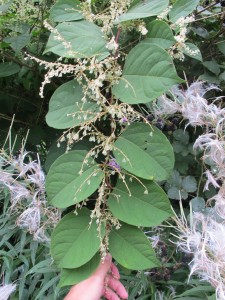 The problem with Japanese knotweed, is that despite the fact it dies back throughout the winter, its root system is both extensive and strong.
The roots are the only way in which the plant can spread, as it doesn't produce seeds.

This vigorous characteristic has resulted in it being an offence against the 1981 Wildlife and Countryside Act to grow it, and if it isn't controlled by those who have it in their garden, a community protection notice can even be given.

In terms of control, Japanese knotweed is obviously extremely difficult. Digging the weed out is certainly the most environmentally friendly method; however it is back breaking work considering the roots can travel so far and that the smallest rhizome can produce an entirely new plant.
In terms of chemical sprays, Glyphosate is the most viable option. Applied to the leaves, it is absorbed by the entire plant and is capable, after a few years, of killing this troublesome weed.

A relatively new option however is biological control using psyllid (plant sucking bugs). Currently on trial, if this method proves successful, hopefully it will be offered to gardeners up and down the UK. 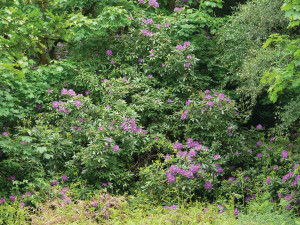 Although Rhododendron ponticum produces the most gorgeous mauve flowers, it does have an extremely negative impact on both wildlife and the ecology of the site which it inhabits.

The Forestry Commission has found that it can significantly reduce the numbers of earthworms, birds and plants in the area and it is also considered to be toxic to herbivores.

Other habitats of small mammals, such as the dormouse, have also been badly affected due to the smothering effect of the rhododendron on native plants.

Currently, the seemingly most effective control method is by injecting the stems with a herbicide. This supposedly kills the plant within six months and makes the process of control far more precise.

The National Trust have even taken to it - using this particular method in their beautiful rhododendron gardens in Inverewe in order to prevent the spread of rhododendron into nearby woodland. Despite a display of rather pretty pink flowers, Himalayan balsam can be extremely difficult to get rid of if it takes hold in your garden.
Producing 800 seeds every year, which can survive for up to two years whilst floating in rivers or streams, and extremely tolerant of shady positions, Himalayan balsam is extremely invasive.

Similarly to Japanese knotweed, Glyphosate can be used for chemical control; however simply digging it out prior to it setting seed is perhaps the most fail-safe and environmentally friendly way of control.

For more invasive species and the full article, click here.