Tennis surfaces can generally be categorised into two types, each of which develop different problems, so need their own maintenance requirements - hard courts, generally Macadam or Acrylic, that provide a hard finished surface and are often painted; and artificial grass that are carpeted courts with a dressing of, or filled with, sand.

Hard courts become dirty due to airborne elements, debris and detritus that drop onto the courts. If this is not removed, it will start to break down and will contaminate the surface. It also stops the surface from draining properly, which can make the surface hazardous in wet conditions.

You can prevent problems occurring by regularly cleaning the surface (on a daily or weekly basis) with combinations of blowers, brushes and vacuums. If you do not carry out preventative maintenance, you must then react to the resultant problems that are more difficult, intensive and, therefore, more expensive to resolve. 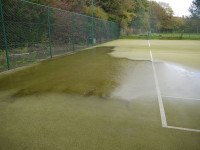 The preventative maintenance is always the most important type of maintenance. This often involves Replay working with facilities to produce a plan of maintenance that the facilities team are able to implement themselves, using relatively inexpensive equipment, to prevent more serious problems occurring.

As already mentioned, non-natural courts are assumed to require either low, or no maintenance! This is very evident with new installations because the surface looks all sparkly and new. Because of the newness, they tend to be neglected and left with nothing done until it begins to deteriorate and problems crop up. By this point, the damage has already been done. Although a surface will never look as good as it does on day one, the aim is to look after it with regular routine maintenance to keep it looking and performing as good as it can.

If the preventative maintenance is not conducted, or conducted frequently enough, you will find that contamination will build up within the surface - all the dust and detritus (leaves/twigs that may drop onto the court) will start to decompose, break down and accumulate in the crevasses of the surface. This applies to both hard courts and artificial grass courts. This contamination will then start to clog up the surface, which means that the courts will not drain as well and a dirty/muddy residue is left on the surface.

From this, you ultimately start to get vegetation growth appearing on the surface - moss and algae are one of the biggest problems found with both hard and carpeted courts - and will grow and spread, in the right weather conditions, very quickly. 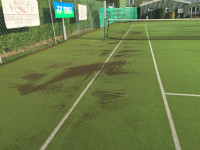 Once this problem appears, it shows that the preventative maintenance has not been effective enough and now you must react to it. If you catch it early enough, this could entail conducting some more specialist maintenance, such as an initial chemical treatment to kill off the plant and growth, before utilising a system of rotary brushes or vacuums to try and brush out the moss and the algae.

If it has been left to really proliferate and spread, the only real option to look at on a hard court is to use the Replay AquaCourt process. This process is a type of power washing of the surface to remove the detritus and vegetation, and uses a similar principle to our AquaTrax athletics track cleaning process, but is specifically for hard tennis courts and involves a pedestrian machine that uses water jets.

It will take about a day to clean a whole court using the AquaCourt machine. After cleaning, the surface will be restored to an 'as new' condition and the team can then look into putting a preventative maintenance programme in place.

As an aside, the paint that is used on a hard court will contain an agent to give the court slip resistance. This can start to wear off over time through play, maintenance and general weathering, particularly on the service and base lines, where it will receive a lot of agitation by players moving around. Therefore, every four or five years the courts will need to be repainted.

On a carpeted court, preventative maintenance will be very similar to that on the hard courts - all about removing surface debris, regularly brushing the surface and using blowers/vacuums to remove any debris. 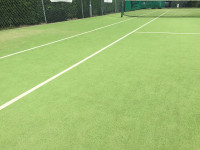 A common problem with carpeted courts is that the infill, which is there to protect the carpet, often gets migrated out of the surface, especially in the service line/base line areas. If and when this happens, the carpet will tend to wear more quickly. The same areas that you find wear out on a painted hard court are the same areas on a carpeted court that tend to get worn or damaged - potentially to rip or tear. It is important to keep the sand levels at the right height within the carpet, which is done by regularly brushing to get the sand back into the high-wear areas.

As with hard courts, debris that is dropped will sit on top of the sand and start to block up the drainage of the carpet, resulting in problems such as silt, dirt and flooding. To counteract this, our 'Rejuvenation' process uses compressed air to take out the existing sand and all contaminates, and redress the carpet with new sand.

For over twenty years, this has widely been recognised as the class-leading method for restoring tennis courts, with both small and large extraction machines available depending on the access and size of facility. Depending on how good a facility's preventative maintenance programme has been, this process may only need to be done from year seven onwards. This takes roughly a day per court, but helps to extend the life of the court by a further five years. 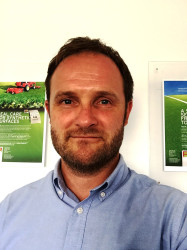 Part of the preventative maintenance programme could be our 'Revive' procedure that cleans the sand infill regularly. A high demand for this service comes from tennis clubs that generally have multiple courts and are dedicated members clubs. As they don't always have dedicated groundstaff to look after them, and it often falls to committee members and volunteers to do the work, we will get called in every two or three months. The process is a more intense clean, compared to what they would be able to do themselves, and keeps the infill clean and the surface clear of debris.

As a general point, particular attention should be paid to the perimeter area and the net lines, as this is where problems start to take hold - these areas don't get played on and don't get worn, so they stagnate, allowing moss and algae to quickly grow and spread.

In the case of Aylesbury Tennis Club, whilst they don't have high trees to cause a problem with falling leaves, they do have some bushes surrounding the courts. However, rather than debris, the main problem here was an age thing - they hadn't done a lot of maintenance themselves, nor called anyone in to do it for them. The surface built up a lot of airborne dust, detritus and debris off players' footwear that went into the infill and started to seal the carpet.

When the surface becomes non-porous, the rain can't drain through and begins to lift out the lighter dust and debris from the infill. This then travels around the court and is deposited in lower areas (called silt puddles) on the court. Aylesbury had a lot of surface silt that had been flushed out of the carpet, moved around to the lower areas and left hazardous, slippery areas. A couple of the courts at the bottom end of the club became unplayable because they were so slippery and dangerous. When we went in, we could see that the carpet itself was in good condition; plenty of pile depth left; good construction and no seam failure, but the contamination in the sand was the issue. The remedial action was to run the Rejuvenation process, using compressed air to extract the sand and redress with clean sand. To prevent this happening in the future, the club was encouraged to 'up' their routine maintenance both in-house and external.

A tractor and brush were purchased to ensure weekly maintenance, and Replay were contracted to go in four times a year to carry out their Revive process to keep the existing sand clean and prevent a reoccurrence of the problem. The combination of processes restored their courts to 'as new' conditions and added an extra five years to the life of them.