During Rochdale AFC's ninety-two year stay in the Football League, they have never won anything, although they have achieved promotion on a few occasions recently via play-offs and league position. Until recently, when Bradford City achieved similar, they were the only side from the lowest level to have reached the League Cup Final.

However, for the diehard fans who regularly flock into the 10,000 capacity Spotland Stadium, this does not seem to matter a jot. Indeed, for a club that has somewhat richer neighbours within Greater Manchester, it is probably passion and commitment from the players that keeps them coming back for more.

Oli Makin started his career at Rochdale as an apprentice under then head groundsman Phil Collinson. "He taught me a lot," says Oli, "but the lure of playing cricket professionally saw me head off to Australia after four years at Spotland whilst studying NVQ Level 2 in sportsturf at Myerscough College." Oli also had trials at Hampshire CCC where he played a number of 2nd XI games, returning best figures of 8-86 in the second innings of a game against Surrey CCC 2nds. In his words, he was "close to being signed up".

At the end of the 2011 season, he returned to Spotland as Head Groundsman and, as a home town boy, it is a job he cherishes.

As well as the football team, Spotland is home to Rochdale Hornets Rugby League side, so the pitch can take "a bit of a hammering".

"Their season overlaps the end of one football season and the start of another, plus we also have local football cup finals and a few other games, including charity events, at the end of the football season, so there's very little time for renovations to be carried out. We bring in a contractor to do what we can as we don't have sufficient equipment." "This season, the way the fixtures worked out, we had a bit of a window, so we koroed off the top 15-20mm and worked 150 tonnes of fibresand back into the pitch as it had been a bit neglected, renovations wise, the previous year. It was then seeded with a Battersby's mix similar to A20."

"It's all a far cry from my volunteer days helping a mate out Norden Cricket Club," he confesses.

Oli has one full-time assistant, eighteen year old Drew Duffy, who is currently completing his NVQ Level 2. If that name is familiar, it is because Drew was successfully introduced into the industry via Pitchcare's 'Find Me A Job' campaign.

"We also get help from Dom Humphreys. He's only fifteen years old, but comes down on a voluntary basis when he's not at school or when he has free time. I can see him coming into the industry once he has completed his studies," suggests Oli.

The pitch is a Mansfield FibreSand construction that, Oli says, needs to be kept moist otherwise the surface would become unstable and break up. 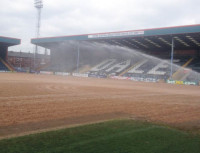 "We have a full pop-up irrigation system with ten sprinklers around the outside of the pitch and six in the middle, so that helps us achieve that.

We also have a full set of covers to help keep the frost out of the pitch. The supporters trust have actually just bought a new set of covers to try and help reduce the amount of games that get lost to the frost."

"During harsh winters, there's a fifteen metre strip down the main stand side of the pitch which struggles to stay free from frost as it is constantly in shade in the winter months. We double up with the frost covers but, sometimes, the frost is too severe to keep out. The only way to stop it happening would be with underground heating!"

"The pitch drains really well, so we have no problems with surface water or flooding."

"Presentation is really important to me," states Oli. "We have two Dennis G860s that provide a clean cut and stripe up brilliantly. We cut the pitch every day during the main growing season. We cut at around 25-26mm to try and allow us to cope with the rigours of football and rugby."

"We aim to aerate every 6-8 weeks to allow us to keep the pitch open to get as much air into it as possible and keep it free draining. We use a small vertidrain; it's a long drawn out process, but is a vital operation that needs undertaking. We don't scarify, just carry out verticutting during the growing months to allow the grass to stand up rather than lying flat. We overseed with a Sisis dimple seeder. We mark out with a spray jet linemarker and neat paint."

"Drew and I share all the jobs between us, as I feel it benefits us both by having experience on all bits of kit."

With Rochdale lying in the Pennines, Oli is no stranger to adverse weather conditions. This affects the work he can undertake on the pitch. "We are being proactive though," he says. "We are currently in the process of trying to make our own lighting rigs for our goalmouths and just in front of the dugouts where the players enter the pitch. The lights were donated to us by Manchester Police following a raid on a cannabis farm and we are in discussions with them and Hopwood Hall College to see how they may be utilised."

"Mind you, a full set of lighting rigs would be the first thing on my wish list ... and a Mulitcore, Desso pitch and undersoil heating!"

"I also like to get a few soil samples taken, as it gives me an idea of what I should and shouldn't be putting on the pitch."

"Apart from a nematode problem we had during my first stint here - which we used a garlic constitute to resolve - we don't have too many pests and disease problems," continues Oli. "We do spray for weeds. Drew is about to go on his PA1 and PA6 certificates to help his knowledge of spraying, so it enables him to carry out this work."

"Pigeons are my biggest problem. We've tried three non-lethal ways of getting rid of the them, but they didn't work. So we sometimes use an air rifle to get rid of them."

Oli says that the club are considering employing an apprentice in the near future. "Both Drew and I came through the system, so it certainly works," he states.

Oli has a few final words on the industry. "Groundsmen are very important in the sporting world as, without us, there would be no games taking place. I think we have the best pitches in the world, because we put the most research into the job. Sadly though, people outside the industry don't understand the science behind this job and the efforts it takes to get a pitch to the highest standard."

Most equipment is sourced from Campey Turf Care, whilst a local company, Bradshaws, carry out servicing