by Charmian Robson
in Industry News
on 20 Apr 2015 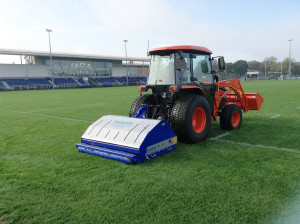 Since introducing the Imants ShockWave aerator to his maintenance programme, Head Groundsman at Glasgow High School David Miller, has not had to cancel a single rugby match through water-logging.

David is responsible for five natural grass pitches at the prestigious Glasgow High School where the predominant sport is rugby. This is appropriate in view of the fact that the Glasgow Accies Rugby Club is located right next door.

It was at the Accies ground where David first saw the Imants ShockWave in action. Head Groundsman Robert Cheape purchased a 2.2m ShockWave from Campey Turf Care Systems in 2013 and had used it to great success.

David wanted to know if they too could achieve similar results at Glasgow High. "We'd had a real problem with flooding for some time and it was very frustrating to have to call off matches - particularly for hockey. We run the only two remaining grass pitches in Scotland that are used for hockey, and I don't want to lose them. It's so important to keep them in play. "

David explains further; "This machine has had a major impact on the drainage on the Glasgow Accies pitches. Although we wouldn't need such a wide model I could really see an opening for the smaller 1.55m for our pitches."

Following a demonstration arranged through local Campey dealer Double A, David had no hesitation in buying the machine.

The blade action has a unique double function; it slices through the soil profile creating a slit while at the same time pushing the soil from left to right as it travels. This sideways movement breaks up the compaction and aerates the soil both vertically and horizontally to a depth of 120mm to 530mm depending on the model.

When using the Imants ShockWave to treat an area it will create a surface and soil structure that drains well and remains dry, with minimal impact on the playing surface so play can be resumed soon after treatment.

"We have now used the ShockWave three times on all five pitches over the last year," says David "It's very easy to operate, and if you take your time and don't rush it the results are brilliant. For heavy use sites like the scrummage areas where compaction is at its worst, I may go over at a few different angles to maximise the effect.

"After sandbanding our main pitch last year we "shockwaved" from touchline to touchline, to encourage drainage to the lateral drains."

David is enthusiastic on every aspect of the ShockWave "It's an amazing machine. It has made an enormous difference to our rate and level of play. We no longer have to cancel games and the players are competing on excellent surfaces which recover well."

He finished by declaring "The other bonus is that despite using the smaller 12mm blades they are holding out well and general maintenance is easy - you just wash it down and put it back in the workshop until next time. You can't get better than that!"