by Manda Sansom
in Conservation &amp; Ecology and Pests & Diseases
on 20 Nov 2013 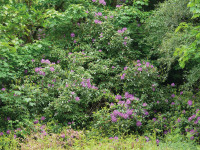 They make a stunning display in spring, but some Rhododendrons are now a major headache for estate managers, groundsmen and greenkeepers, particularly as they are linked to the spread of tree diseases.

Rhododendron (Rhododendron ponticum), brought to the UK by the Victorian plant hunters, was widely planted throughout upland Britain in gardens, and in woodlands on sporting estates, to provide cover for game birds, particularly pheasants. From this beginning, the species has escaped into woodland, both natural and commercial, scrubby areas and into open country.

It is commonly seen on golf courses and in parks, where it can become a problem. High densities can greatly reduce biodiversity and the invasion is so great in some areas, especially in wet western Britain, the decision has been made to establish management programmes.

More recently, Rhododendron plants have been identified as major reservoir for tree diseases Phytophthora ramorum, and Phytophthora kernoviae (sometimes known by the US term of Sudden Oak Death). Since 2009, the spread of the fatal disease to Japanese Larch (Larix kaempferi) has been widely linked to Rhododendron. These diseases are notifiable pathogens and destruction of infected plants is a statutory requirement. Contact your local Fera plant health and seeds Inspector for more details.

Other members of the large Rhododendron family include the Azaleas and all are grown for their spectacular flowers, usually borne in spring. Leaves are spirally arranged; leaf size can range from 1-2cm to over 50cm (20 in). They may be either evergreen or deciduous. In some species, the undersides of the leaves are covered with scales (lepidote) or hairs (indumentum). Some of the best known species are noted for their many clusters of large flowers.

Rhododendron Ponticum is included under the Wildlife and Countryside Act 1981 as an invasive non-native species and it is an offence under Section 14(2) of this legislation to "plant or otherwise cause it to grow in the wild".

The sheer physical size of the plant, up to 8m in places, together with its tough, waxy leaves make Rhododendron a difficult weed to control. In addition, it will quickly re-grow if it is not completely killed.

There are several methods of controlling Rhododendron using Roundup. Overall spraying is not suitable for larger plants or for thick stands, as it is difficult to spray and the older plants tend to be less susceptible. These taller bushes must first be cut back to ground level before treatment. 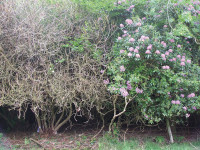 They can either be hand cut using power tools, such as a brush saw or chainsaw, or by using a hydraulic flail, typically mounted on a crawler or other tractor reach arm. The cut stumps may be treated immediately using the cut stump method or the foliage left to re-grow for 2-3 years and then sprayed.

Fortunately there are many different options for using Roundup liquid products and Ecoplug to control Rhododendrons depending on the time of year.

An overall spray applied to the foliage will provide effective control of young bushes up to 1.3m high, or as regrowth 2-3 years after cutting back.

The best time for application is from early May to late September but, in milder areas, applications earlier and later than this have proved successful. A high dose of Roundup Pro Biactive/Roundup ProBio (10l/ha) is required for this species and complete coverage of the plant is required. Addition of Mixture B, a non-ionic surfactant/spreader, at 2% of the spray volume, can improve control and allows the recommended dose rate to be reduced to 8.0 l/ha. Roundup ProBiactive450 requires 8l/ha (6.4l/ha with Mixture B at 2%).

All parts of the foliage should be sprayed since the plant exhibits transcendental translocation, which means spray droplets falling on one side of a bush will be translocated down to roots on the same side but will not be distributed across to the opposite side.

A small, missed area, can result in regrowth and rapid re-colonisation. 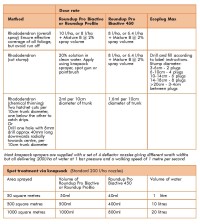 Cut stump treatments are best made from November through to March or April, and not during the period of active sap flow.

Application of Roundup must be made to a fresh cut so that uptake into the phloem (the living tissue that carries organic nutrients to all parts of the plant) is maximised. A two-man operation is often the most practical for a quick, post-felling treatment. If more than a few minutes of time have elapsed, recutting the stump will restore the effectiveness of the application. Uptake is almost immediate from a fresh cut and will be rainfast within ten minutes. Application to a cut that has partially sealed means absorption is slow and rain within six hours will wash some of the product off.

Alternatively, Ecoplug Max plugs can be used effectively, ensuring the risk of environmental or operator contamination is minimised. The plugs can be used all year round, in all weather conditions. For rates see table.

This method works from slightly earlier in the season, late summer, which may be useful to consider where stump painting in November is not convenient. It has the benefit of not requiring the stump to be freshly cut, so it can be used where they have already been cut back, or where the plant is to remain in situ. It is also easy to see which areas have been treated.

Neat Roundup is introduced straight into the phloem through a hatchet cut into the bark of the standing Rhododendron or stump. The cut can be made using a small axe - it is advisable to make a second cut under the first to catch any surplus herbicide. Alternatively a small hole can be drilled with an 8mm rechargeable drill at a slight angle towards the centre of the trunk.

A cut/hole with 2mls or 1.6mls dose is needed for each 10cm diameter of the trunk. Work out how many are needed and space them round the girth, e.g. a trunk of 30cm diameter requires three treatment points.

A spot gun with a solid stream nozzle is recommended to apply the Roundup. Application rate per hatchet cut/hole: 2mls of neat Roundup Pro Biactive/ProBio or 1.6mls Roundup ProBiactive 450 per 10 cm diameter of trunk. 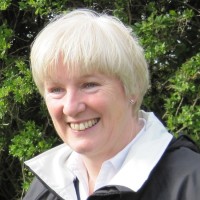 Remember to plan to revisit the site and spray out any new seedlings. These will rapidly germinate after the removal of the canopy and following soil disturbance. A visit 2-3 years after the initial treatment would be appropriate to control both seedlings and re-growth.

Rhododendron's name is French, but originally derives from Greek, meaning 'rose tree'. Rhododendron Ponticum is the state flower of Kashmir, while Rhododendron Maximum features in the State Flag of West Virginia, USA. 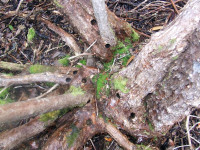 Coille Alba, a not for profit organisation which manages native woodlands in the Highlands, recently carried out a review of Rhododendron control in Scotland for the Forestry Commission. The report assessed the pros and cons of a wide range of methods on different sites, and concluded that stem injection should play a more important role in control programmes.

"Compared to conventional methods, stem treatment also causes minimal environmental impact." Mr Parrott explains that large rhododendron bushes are usually cut and burned. "This is labour-intensive and carbon dioxide emissions from burning rhododendron are around 160 tonnes per hectare. Regrowth must also be sprayed. Stem treatment minimises damage to non-target plants as chemical is injected into a reservoir created with a drill."

Coille Alba has found that 99% of injected rhododendron is killed in a single treatment, so follow-up visits are 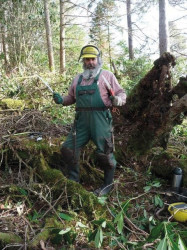 No specialist equipment is required for stem injection - just a cordless drill and a plant sprayer. But, as with any technique, it is important that contractors are thorough and follow the right method. They also need to be patient, as it can take many months before bushes die, Mr Parrott points out.

"We worked on a site last winter and spent almost six months crawling through rhododendron stands. It wasn't until May that we saw any sign of leaves falling off the bushes."

Stem injection appears successful in all seasons and all weathers, even in near-freezing conditions. Monitoring of treatments last year showed no difference in control on rainy days or when the mercury hovered near zero.