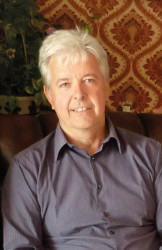 Opening for play in June 1992, Priskilly Forest Golf Club is a nine-hole, parkland course located about five miles from the west Wales coast. Meticulously maintained throughout the year, the family-run course offers an excellent challenge of golf set in wonderful Pembrokeshire countryside, as Mike Bird discovered on a recent visit

Constructed on sixty acres of former farmland, Priskilly Forest Golf Club takes its name from the ancient mixed woodland that borders the eastern flank of the 400 acre mixed farm that has been owned and managed by the Evans family since 1948.

When the family first took possession of Priskilly Forest Farm around sixty-five years ago, the land supported a range of arable crops, Friesian milking cows and a pedigree Hereford beef herd.

To supplement farming income, farmhouse bed and breakfast accommodation was offered from the very early days, providing a welcome stopover for the growing number of tourists travelling to west Wales to take in the spectacular scenery of the Pembrokeshire Coast National Park, established in 1952.

Owned and managed by husband and wife, Phil and Joy Evans, the business is very much a family affair with son, Robert, and daughter, Rebecca, being the fourth generation of the family to have lived and worked at Priskilly Forest Farm. 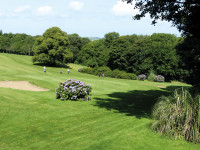 The first major change to farming practises came in the early 1970s when the dairy herd was sold, enabling the farm to concentrate fully on production of pedigree beef cattle and arable crops. These two enterprises flourished comfortably alongside each other until the late 1980s.

"Livestock prices plummeted when BSE reared its ugly head," recalls Phil. "As it appeared unlikely that there would be a speedy recovery, we decided to look for an alternative form of income that would complement the hospitality side of the business, whilst utilising land that would no longer be needed for farming."

The decision to apply for planning permission to build a new nine-hole golf course on 25ha (60 acres) of former farmland was helped by the fact that the three golf courses closest to Priskilly Forest Farm are all located more than twelve miles away.

Submitted to the local authority in 1990, the golf course project received planning approval without any conditions or changes to the initial design.

"We wanted to create a golf course using a minimal amount of earth moving, utilising the contours, u

ndulations and natural fall of the land to provide variety, interest and a good challenge for golfers of all ages and standards," explained Phil. "People playing the course include guests staying in the house on short or longer breaks, pay-and-play day visitors to the area, as well as a good mix of local people who are members of the club."

The five fields chosen for the course slope naturally downhill towards the farmhouse and the ancient woodland of Priskilly Forest, through which the Western Cleddau river meanders on its way to Milford Haven and the open sea.

From the highest point on the course, some 100m above sea level, the Preseli Mountains can be clearly seen fifteen miles to the north-east, whilst the vast expanse of St Brides Bay sparkles in the sunshine a similar distance in the opposite direction.

"The sloping nature of the land demanded the creation of a number of level landing areas to prevent the ball running away," commented Phil.

"Other than that, the farm's existing medium-loam soils were used to good effect in shaping and creating the greens and tees, all of which benefitted from the installation of new piped drainage systems."

The uppermost 300mm profile of every green was finished with a 70:30 sand-soil combination and sown with a fescue/bents grass seed mix. The tees were also topped with the same sand/soil mix and sown with finer ryegrasses.

While the earth-moving equipment was on-site, Phil oversaw the excavation of eighteen bunkers positioned strategically on fairways and close to greens.

"I am not a big fan of sand bunkers on what I would describe as a parkland-style course which started off originally as farmland," commented Phil. "They don't look all that natural and are costly to maintain. For those reasons, almost half of our original sand bunkers have been partly filled-in and sown with grass seed to create excellent grass bunker hazards that only need mowing every few weeks. It's saving us a great deal of time and effort on the maintenance side."

Although there were already a number of fine specimen trees within and surrounding the fields on which the new golf course was built, Phil and Joy were keen to plant more trees so that the development blended better with the heavily-wooded area a few hundred metres to the east of the first tee and farmhouse.
Between 1994 and 1996, around 5,000 young trees and saplings were planted on the course, mainly in the semi rough between the fairways and behind greens.
Comprising a mix of alder, oak, ash and rowan, plus some Corsican pine, the trees have now reached a size where active management is needed to help the best specimens grow and flourish without being over-crowded by their neighbours.

"We want to encourage particularly the oak and ash that are native to this area," explained Phil. "Thinning of our original plantings started a few winters ago, and will continue for the foreseeable future. The results are already having a beneficial effect that is appreciated by golfers, giving the course a mature appearance that belies its youthful age."

Although the golf course can be played happily as two rounds of nine holes to produce a 5,900 yard, par 70 18 holes, every green has to be played from the same tee during both nine-hole rounds.

Phil pointed out that he is currently looking at building a number of additional tees. "We have found that societies prefer to play 18 hole courses and hope that creating more tees on the course will attract more corporate and society golfers," he said.

"However, this is not the case with the majority of our guest accommodation visitors or pay-and-play golfers, many of whom do not have the available time to play an 18-hole round of golf in a day. For just £14, they can play nine-holes in around two hours, which seems to suit a growing number of people, especially if they are visiting the area primarily to enjoy the coastal scenery."

Guest accommodation packages are available with or without golf, whilst membership is open to all, attracting sufficient regular local players for the club to support teams playing competitive matches through the season in both the Dyfed and Three Counties Leagues. There is also a Seniors team which plays friendlies regularly against other local clubs.

"Increased levels of play over the past ten years has prompted a move to 100 percent sand topdressing of greens in an effort to maintain an open, free-draining surface of a consistent speed," said Phil. "I am delighted to say that the greens have responded well to the treatment, which is accompanied by regular aeration using a ride-on aerator fitted with hollow, needle or solid tines, depending on turf needs and weather conditions."

The golf club employs one full-time member of staff, Gareth Rees, who has worked at Priskilly Forest since 1998 and is responsible for daily course maintenance, concentrating primarily on keeping the greens and surrounds, tees and fairways closely mown and nicely presented.

Course machinery is mostly pre-owned, but certainly not outdated, being sourced mainly through magazine and internet adverts placed by specialist fine turf machinery dealers who have come to learn that Priskilly Forest is an important and genuine golf course customer for high quality second-hand equipment.

Such knowledge has helped the club acquire, over the past three years, a five-gang fairway mower, a greens triple and a diesel work vehicle, the latter coming complete with mounted topdresser and a sprayer.

"We plan our major course work schedules according to the season and upcoming league or club matches," explained Phil. "The primary focus is on maintaining first-class playing surfaces for golf at all times. No week is ever the same."

Pointing out that his long farming experience had provided a good foundation for growing and looking after high quality sports turf, Phil stressed that he has learned, and continues to learn, a great deal about the skills and science of greenkeeping by studying magazines and web-based information resources.

He also receives monthly visits from a local amenity representative, when they take the opportunity to walk the course and chat about issues and concerns regarding course maintenance, turf performance and health.

"It's a continuously evolving situation, governed primarily by our ever-changing weather patterns," commented Phil. "One thing we can do in this part of Wales is grow grass, and I am delighted that we are able to keep the course looking and playing so well throughout the year. That said, we have no irrigation and have to bowser-in water for the greens and tees during hot, dry weather."

Phil admitted that such events place added pressure on his limited greenkeeping resources, a situation which will not be helped if he increases the number of tees on the course.

"Subject to cost, I think it might be sensible to install underground water pipes and a series of hose points at the same time," he said. "There are two things I've learned about golf greenkeeping over the past twenty-one years. Nothing stands still and one is always looking to make improvements."

"Overall, the end results have been most worthwhile and it is very rewarding to be complimented by golfers on the condition of the course. The land was great for farming and is proving equally suitable for sport and recreation. I am delighted that we took the plunge when we did." 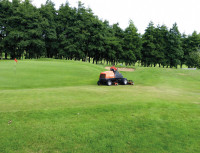