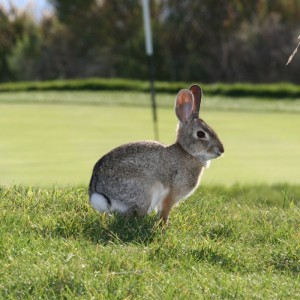 A Tyneside golf club has received local negative publicity for shooting rabbits on its greens.

The story is a warning that many people react badly when they hear that their local club kills animals and a reminder that there are alternatives to culling.

South Shields Golf Club hired a rifleman to cull rabbits in a bid to reduce the damage they had been causing to its fairways and greens, according to its local newspaper The Shields Gazette.

However, police were called when concerned members of the public heard the shots.

The police found everything to be in order, although the club did respond by temporarily suspending the cull.

The paper stated: 'It has been claimed that walkers using a public footpath passing through the course were put at risk, but the club denies that.

'In an e-mail sent to the Gazette, a concerned reader, who asked not to be named, says: "They are shooting next to a nature reserve and also across the public highway that runs across the golf course to the Old Mill.'

Police confirmed they visited the course in early January and found the rifleman to be in possession of a firearms licence and insurance cover from the British Association for Shooting and Conservation.

Malcolm McGuire, the club's captain, has dismissed any claims that walkers were put at risk as well wide of the mark.

He said: "The claims are rubbish. These people are professionals, and nobody was ever at risk.

"We often have a problem with rabbits digging up the greens. Due to our location in the countryside, this unfortunately happens.

"Whenever it is required, professionals are hired to keep the rabbit population under control."

Last year the associate director for PETA, Mimi Bekhechi, wrote for Golf Club Management to say that there are alternatives to shooting rabbits for golf clubs.

'The best way to deter rabbits is to make the area undesirable to them. Scattering mothballs, lavender or catnip around the plants that rabbits enjoy will keep them at bay. To evict the animals, place repellents such as rags soaked with ammonia inside or near the burrows. Rabbits don't like the smell and will leave the area. In less visible areas of your course, you can place statues of dogs or foxes, which may scare them away. Most garden centres or DIY shops also sell electronic repellents. These solar-powered devices slide easily into the ground and emit sounds, vibrations and flashing lights which deter animals both above and below ground,' she wrote.

For the full article from Golf Club management click here.