0 Marshalling his 'troop' at Burton Albion

Burton Albion's Pirelli Stadium pitch is in the care of Head Groundsman, Simon Marshall. Now in his six season, the last four in the Football League, he has won a number of accolades for the quality of his pitch.

With strong ties to the FA's St George's Park complex, the quality of his playing surface has resulted in the ground hosting International matches at various levels, all of which add to his workload.

Season 2013-14 sees Burton Albion competing in the Football League for a fourth season, following their promotion from the Football Conference as champions in 2008-09.

After a first season that saw the Brewers comfortably consolidate their new found status with a thirteenth place finish, the second term in the Football League was a more difficult campaign, given that the club had to play over half of their league matches in the final three months of the season after numerous postponements left them with up to eight games in hand on their rivals.

From a comfortable position just five points off the play-offs in December, their inactivity meant that, at the start of February, a relegation battle ensued, with a six game unbeaten run at the end of the season eventually confirming their League status for a third season with just a game to spare.

The club's rise through the Conference and into the Football League coincided with the move from previous ground Eton Park to their current home, the Pirelli Stadium, built just a stone's throw from their former home on the site of the Italian tyre giant's Sports and Social Club.

Albion began life at the Lloyds Foundry ground on Wellington Street, but high attendances meant that the club quickly searched for a more suitable home. Eton Park was built off Derby Road and officially opened on 20 September 1958, coinciding with the club's promotion to the Southern League. From then, until its demolition in 2005, the Brewers played all their home games at Eton Park.

The club has also had spells in the Northern Premier League (NPL), because of their location in the central Midlands. Indeed, they entered the Conference in 2002 upon winning the NPL title.

Built at a cost of £7.2 million, the Pirelli Stadium's capacity was originally set at 6,200, but later raised to 6,912. The first match was a friendly between Burton Albion and Chester City on Saturday 16 July 2005.

The club's Head Groundsman is Simon Marshall who joined the club in 2008. Simon previously worked at Derbyshire County Cricket Club for ten years, so it was quite a career change for him in terms of managing a Fibresand pitch compared to a heavy clay loam cricket facility.

Up until 2011, Simon looked after the pitch on his own, however, he was able to persuade the club to take on an assistant groundsman as part of the Government's apprenticeship scheme.

This worked out really well, with his first apprentice going on to work at the FA's new St George's Park Football Centre. So, the club have now taken on Nick George under the same scheme.

Nick has already shown an interest and aptitude for groundsmanship by attending a number of training courses, including a Pitchcare Lantra accredited course led by Dave Saltman. Simon says that he is only too pleased to be able to help train the next generation of professional groundsmen. 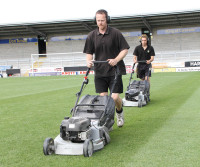 Having another member of staff helps enormously, especially when maintaining a sand-based pitch which requires a high level of input in terms of feeding, watering and presentation.

Having close ties with nearby St George's Park has seen the stadium host an England C international and UEFA U-19 international, along with several UEFA U-17 matches featuring England, Italy, Sweden and Malta. An England Women's U-19 international between England and Scotland also registered the highest ever crowd for a fixture at that level. The ground also hosted the Blue Square North play-off final for three years between 2006 and 2008 and is the regular host of the Independent Schools Football Association junior finals each March.

So, on top of the club's annual Sky Bet League 2 matches, Simon and Nick are kept busy hosting plenty of other fixtures. They even had to compromise on this year's end of season renovations to accommodate a Ladies International match on the 26th June, beginning the renovation in earnest on the 20th May, and leaving just five weeks to get the pitch back in play.

The pitch was lightly fraise mown to clean it out, topdressed with sixty tonnes of 80/20 sand/soil rootzone, vertidrained and overseeded with British Seed Houses A20 seed mix. Then an Everris 8:12: 8 preseed fertiliser was applied, followed by a 19:5:18 slow release to see it through the growing-in period.

The club utilises PSD Agronomy Services to help ensure the pitch is going in the right direction and meeting its potential. Regular samples are taken to monitor soil pH and nutrient status, along with keeping an eye out for any possible nematode activity. In fact, the populations are well below recommended threshold levels, so are currently not causing any problems.

An attack of fusarium has been seen a couple of times, but a preventative application of fungicide has helped reduce the incidence of disease.
The newly renovated pitch, once germinated, was cut using pedestrian rotary roller mowers, firstly at 40mm, gradually being brought down to summer height of around 28mm. The club have two Allett Buffalo cylinder mowers that they cut the pitch with on a daily basis throughout the growing season. Match day height will vary between 24-28mm depending on the time of the year.

The pitch is orientated east/west meaning that, come the winter, at least half of the pitch is always in shade lengthways. This becomes quite an issue during the winter months, especially during heavy frosts.

The club have invested in sixteen pitch cover sheets that are fairly easy to handle, but still time consuming to put out and fold away.
Winter is always the worst time of the year for groundsmen, having to drag sheets on and off the pitch to accommodate fixtures and training, especially if they are covered in snow.

The cost of undersoil heating or lighting rigs at Burton Albion would be prohibitive with their current league status, but Simon is hoping that they may secure further promotions so that at least the lighting rigs might be achievable, especially if he can source them locally and have them made fairly cheaply.

As for irrigation, the club had a perimeter pop-up system installed during the initial build, with three hand sprinklers for watering the centre areas of the pitch. However, these central sprinklers have recently been replaced with infield pop-ups, making it possible to water the pitch more easily pre-match and at half time.

The pitch gets verti-drained a couple of times a year, coupled with more regular aeration work using a Greencare Coremaster loaned from St George's Park.

Simon has a good relationship with the facility's Head Groundsman Alan Ferguson and, because they stage a lot of FA matches at the stadium, he's able to loan an array of equipment during the season.

The club also enlists the help of volunteers, with one of their longest serving, Cliff Wilson, having been involved at the club for over fifty years. He's so good that Simon is happy for him to overmark the pitch.

Like most football clubs, match days are the most enjoyable day of the week for the groundsman; being able to present the pitch to the public and the away team is always a thrill, says Simon. Depending on the time of the year, most of the pitch preparation work will be completed the day before a match, however Simon always likes to cut and mark out on match days.

They usually start around 7.30 on the Saturday morning, getting the pitch ready by midday. It is then a case of putting out the practice goals and watering prior to the game. At half time, Simon, Nick and a few volunteers will divot the pitch and then re-water if deemed necessary.

Once the game is over, it is simply a case of putting any equipment away and then going home, leaving any pitch repairs until the following Monday.

The first priority is to replace any divots and scars, clean up the pitch using the rotary mowers and then spend time preparing the surface for the next match.

Simon says the club is run very well, and there is a great desire from all personnel to see it become even more successful in the coming years. There is a good 'team' spirit, which includes the players.

As for a wish list, Simon is keen to purchase two new Dennis G860 cassette mowers, when finances allow, to improve brushing and grooming and speed up the time it takes to cut the pitch.

At the time of writing, Simon and Nick were looking forward to the new season and quietly confident that the club will do well, maybe even getting that promotion to the next level.

I am sure the pitch will play its part in helping Burton Albion achieve their ambition. It certainly looked in prime condition during my visit and should provide a superb surface for the players to perform on throughout the season.