by Pitchcare Germany
in Industry News
on 16 May 2015 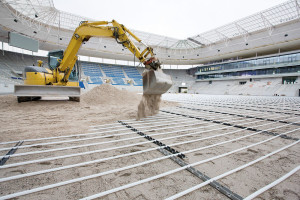 In many of the continental leagues, undersoil heating is becoming a prerequisite for promotion. But, what are the factors to consider when installing a system?

The first UK football ground to have undersoil heating installed was Goodison Park, way back in 1958 and, whilst most top flight stadia now operate the system, it is not a prerequisite of either the Premier League or Championship.

However, on continental Europe, the story is somewhat different, with the German Bundesliga 1 and 2 and the Czech 1st division requiring mandatory installation for promotion to be confirmed. Furthermore, mandatory installation will be a requirement of German Bundesliga 3 from season 2015/16 and the Austrian Bundesliga from season 2016/17. As a temporary solution, an alternative 'home' venue with undersoil heating may be offered; not a popular 'solution' with the fans, no doubt. 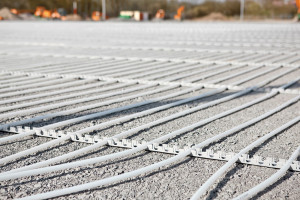 e have been numerous occasions where the effectiveness of undersoil heating has been questioned, most notably on 27th December 2005 when three stadia in the Premier League - the Reebok Stadium, Ewood Park and St. James' Park - failed to stop their pitches being covered in thick snow, which led to matches being postponed. Subsequently, on 1st January 2006, the Premier League investigated as to why the pitches were not able to repel the snow. No conclusions were drawn, but one suspects that the cost of operating the system may have been a factor.

The first system was installed in Germany in 1972 at the Munich Olympic Stadium and, whilst many football stadia followed suit, it did not become a Bundesliga requirement until the 2006/07 season.

To help effect the installation, German and Austrian clubs are offered 100,000 euros (£73,000) in grants from a so-called 'infrastructure pot' earmarked solely for undersoil heating. This is a sizeable chunk of the c275,000 euros (£200,000) installation cost.

The advantages of having the system installed are:

As with underfloor heating, polypropylene pipelines are used - approximately eighteen miles in total - which are buried 30cm deep to allow for continued maintenance work and to avoid the risk of 'burning' the grass roots.

With the system operating at temperatures of up to 40OC, this is an important consideration.

Additionally, the pipes should be spaced no further than 30cm apart to avoid the risk of icing between the pipes and a subsequent 'rippling' affect between a warm and frozen surface.

A water/glycol mixture is passed through the pipes via a direct control system linked to temperature sensors at different soil depths across the pitch, ranging from 3cm to 28cm. In effect, this allows the system to highlight when there is a threat of frosts, whilst the water/glycol mixture guarantees a smooth flow and a rapid rise to operating temperature.

The choice of the control technology is of great importance to allow for specific response times to be established which, in turn, provides timely implementation. The central task of the competent groundsman is to determine the correct temperature settings for the expected weather conditions and to set the parameters accordingly. The control system needs to be flexible enough to achieve this. 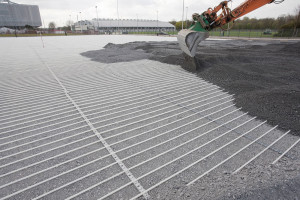 Unlike underfloor heating, which is designed to provide a pleasant heat inside a property, undersoil heating is designed to raise the ground temperature to a few degrees above freezing point.

Undersoil heating is generally not used for snow removal, as the high energy output required to do so means that operating costs would go through the roof. Snow should be removed from the surface to such a depth that the heating system may be deployed more cost effectively.

The duration of thawing depends on the amount of snow. In general, if the system has already been deployed, snow will not settle as the surface temperature is too high.

Wind chill conditions may also influence the performance of the system, especially if a site is open to the elements.

In a severe winter, it can usually be expected that undersoil heating would be required for anything up to two months whilst, in a mild winter, thirty to forty days would be more likely. Costs will vary depending upon the energy source being deployed and geographic location.

At a cost of around £1500 a day, undersoil heating may be seen as an expensive option for cash strapped clubs, but the cost of a match cancellation, with the subsequent loss of revenue, far outweighs the temptation to 'switch it off' to save money.

Images and some words courtesy of Pitchcare Germany.