by Editorial
in Industry News and Conservation &amp; Ecology
on 09 Jun 2015 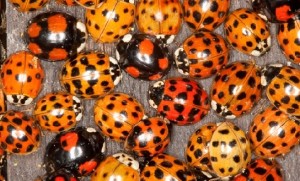 Harlequin ladybirds have been declared the UK's fastest invading species after reaching almost every corner of the country in just a decade.

The cannibalistic ladybirds were first realised to have reached the UK in 2004 when they were seen in Essex and have since spread as far afield as the tip of Cornwall and the Shetland Islands, making it the fastest alien invasion of the UK on record. Grey squirrels, American mink, ring-necked parakeets and muntjac deer are advancing at a rate far behind them.

Scientists monitoring the spread of the voracious harlequin, which will prey on native ladybirds, said the warnings when it first arrived that it would colonise the country rapidly and was the world's "most invasive ladybird" have proved correct.

Dr Helen Roy, of the Centre for Ecology and Hydrology, said a decade of sightings recorded by the public as part of the UK Ladybird Survey since 2005 have revealed just how far and fast the harlequin has spread.

"The harlequin is the fastest-spreading alien species on record that I can think of," she said, adding that it is now consolidating its presence in the UK.

While sightings of harlequins (Harmonia axyridis) in Scotland are much less common than in England and Wales, it has colonised much of the south and has been spotted, though probably hasn't established over-wintering populations, on the north coast and the Shetland Islands.

The species is believed to be responsible for the decline of at least seven native ladybirds, including the popular two-spot, which when last assessed in 2012 had slumped 44%. Dr Roy said that there has been no sign of a recovery among two-spots.

Harlequins might even have some benefits as they prey on a variety of smaller insects, especially aphids which can damage crops and garden flowers, but the extent to which they protect plants is undetermined. There is also evidence to suggest that native insects may now have adapted to prey on the harlequins, helping to keep numbers in check.

One silver lining, said Dr Roy, is that the monitoring scheme has helped scientists better understand the routes alien species use to invade, such as being transported by cars, and how it might be possible to reduce the threat.

Read the rest of the article on the following link:- The Guardian