0 Hanley Castle CC - We are family! 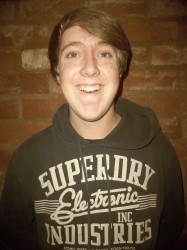 It's not often that a groundsman's mum contacts us so, when an email from Caroline Mathews landed in our editor's inbox telling us about her sixteen year old son's passion for the industry, we were keen to learn more

Todd Mathews is a sixteen year old groundsman at his local cricket club, Hanley Castle & Upton CC, where he helps to prepare and organise the pitch preparation with his dad, Grant Mathews.

Hanley Castle and the neighbouring village of Hanley Swan are nestled in the south Worcestershire countryside, close to the Malvern Hills and have a total population of just 1500. Jointly, they are known as The Hanleys.

There was once a Norman castle, built as a hunting lodge for King John in 1207, from whence the village gets its name. By the end of the 15th century, the castle had been mostly demolished, and the tower was finally removed in 1795. However, a few traces still remain including a dry moat and a mound. A 900-year-old Cedar of Lebanon dominates the village green, and a 15th century timber framed pub is its most striking building.

There has been a cricket club on The Glebe ground for 103 years, the current club having grown out of the merger between Hanley Castle and Upton on Severn in 1999. The present pavilion was built in 1995 and the ground is shared with Hanley Castle High School who are responsible for the upkeep of the outfield.

Todd explains that he has always had a passion for groundwork and loves to produce pitches for friends and family to play on. "I enjoy the attention to detail and presenting pitches to the best of my ability" he enthuses. "My father was, and still is, a volunteer groundsman at the club and, from a young age, I used to help him do the groundwork. He would encourage me to help with mowing and general maintenance, both on the ground and at home. We even drove across the country to buy a second hand Hayter for my twelfth birthday!"

"I have attended Worcestershire Association of Groundsman courses and lectures and have gained some basic qualifications," he continues. "I recently went on an autumn renovation course and am interested in pursuing a degree at Myerscough College after I have finished my A levels."
"I'm a keen reader of Pitchcare, both the magazine and online articles, and this has helped develop my skills. In the future, I would love to be head groundsman at a county cricket ground."

By now, it will be clear that Todd's career path is already laid out in front of him, but what makes this young man remarkable is his love of the work at such a young age. How refreshing it would be if the media picked up on stories like these rather than the scaremongering dross they pump out almost daily about "today's youth".

Todd is clearly part of a caring and encouraging family, and even the cricket club has a 'family feel'.

"The first team includes me, my dad and my two brothers, Rory and Barton. The chairman, Phil Price, and his son Ollie have both played in the first XI, whilst the captain, Chris Duckworth, plays alongside his cousin Will Chambers, and his uncle Rupert Chambers is the club treasurer."

"The second XI also has a family theme," explains Todd, "with the captain, Gary Lewis, playing alongside his son and nephew, with other fathers and sons making up the team. We also have a Sunday friendly XI, which is captained by Nick Bentley, and this team is full of fathers and sons which helps to bed in the younger colts, allowing them to get some men's cricket experience. Due to the small scale of the club - only having forty members - we have a very close relationship; all members get on well together as well as dedicating a lot of time to the club on a voluntary basis. Without them, the club would not be able to run."

Todd goes on to explain that the club runs a ground rota scheme whereby members have to do small, individual jobs, with each work party supervised by the assistant groundsmen - Todd and his father - who run their own sub team as well as organising the other parties' work. The whole ground rota is supervised and managed by Dave Albert, the club's old Head Groundsman, but who now has a more 'hands-off' role.

Some volunteers, with limited experience and knowledge, stick to the simple task of cleaning changing rooms etc., whilst the main work on the square is usually done by our four main groundsmen. Other work parties are led by Phil Price and Rupert Chambers.

Additional advice is offered by Roy McClaren, former head groundsman at Worcestershire County Cricket Club, who pays regular visits as part of the quality control inspection programme instigated by the Worcester Cricket League. "We have been advised in the past to work on levelling the square and improving the soil profile," explains Todd, "but we are only allocated a small budget by the treasurer and chairman. It's probably in the region of £1,000 each year - £100 for machinery hire in the autumn; £350 on loam and seed; £500 on machinery repair and upkeep; £100 on petrol, diesel and oils."

"In 2010, we were able to extend the square and brought on two new strips, which means we now have an astroturf strip (that is used by the younger colts and for occasional senior midweek fixtures), a net strip for senior practice, seven senior strips and two colts strips."

Colts teams are run from U-10 through to U-17, with the youngsters drafted into the Sunday XI to gain experience and, where their talent dictates, the two Saturday league sides.

"The square is about 400m from the banks of the River Severn and has developed a light well drained profile, which we have improved with the introduction of Kaloam. Root depth is 100mm, there's little thatch thanks to regular use of a Graden during the last five year's renovations, and we have a soil pH of 6.6," explains Todd. "Perhaps surprisingly, bearing in mind the trials and tribulations at New Road and our proximity to the river, the ground does not flood."

"There is a drainage system running through the outfield and the square also has its own drainage built in."

"The pitches are used by the local school as well as the cricket club, and are occasionally hired out to other local clubs. We were delighted that the county colts teams felt the surface was acceptable enough to stage district and county fixtures in the last three seasons, so we must be doing something right," says a rather proud Todd.

"One of our biggest frustrations is the school's practice of marking out a twelve lane athletics track across a large area of the outfield and burning in the lines, which affects the quality of the surface," he bemoans.

"We often struggle with a build up of worm casts, and we also have rabbits who like to eat the grass and leave their droppings all over the square and outfield. Foxes have also caused problems on the outfield where they have dug small holes."

"Again, with limited funds, all we can do is keep the worm casts to a minimum, with regular brushing of the square, as well as filling in and reseeding the holes created on the outfield. We do have a club member who has his spraying qualifications so, if any weeds or pests do occur, he can come in and spray as and when required."

Todd goes on to explain that the square is maintained at a height of 10-15mm using an Atco Groundsman. "During wicket prep, this is reduced to 7mm, then down to the playing height of around 5mm using a Hayter Ambassador."

"A wicket is prepped using Pitchcare's fourteen day guidelines, which we have printed out and stuck in the grounds shed for us to follow."
"The pitch is initially scarified with a Sisis Combirake, then dragbrushed when the sward has been thinned to a suitable coverage. If necessary, the pitch is soaked and rolled using an old Bomag road roller. Once the pitch is ready for the match, it is marked out just before the game."

"The square is aerated throughout the winter months with a Sisis spiker but, during the season, only wicket ends are repaired. Due to the size of the square the wickets cannot be spiked, overseeded and topdressed as they will need to be brought back into play as soon as possible.

"We are severely affected by changing weather patterns due to our proximity to the Malvern Hills," Todd goes on to explain. "With our groundsmen being in full time work (or at school!), this means that only evenings are available for pitch preparation which, in turn, means any rain in the evening can result in no work being done on the square."

The obvious aim now is to continue to improve the square. "We are trying to rebuild the levels of the square as we have some issues with lower points. This is slow progress though, as budgets mean loam cannot be bought in large enough quantities to have an immediate effect."

"The square is gradened in three directions to keep thatch content low, cleaned out using a Sisis Auto-Rotorake, spiked, seeded and then six bags of Kaloam are applied per strip. Just two bags of 20kg grass seed is sown, which is the bare minimum to get acceptable coverage."

"It's a slow process," confesses Todd, "that is not helped by narrow access to the ground which restricts deliveries."

"All the work is carried out in-house. To use the autumn renovation equipment, we attended the required certification courses, whilst keeping abreast of developments via the Pitchcare website and WAG (Worcestershire Association of Groundsmen). Three of us have recently been on the autumn renovations course to help with end of season preparation, whilst our local ECB pitch adviser also comes in to recommend future work."

Where machinery is concerned, top of the club's wish list is a modern roller, rather than the old 'hand cranked' Bomag. "A new dedicated cricket roller would certainly help, as would a set of gang mowers so that we can cut the outfield when we want to rather than relying on the school."

"Any machinery we need is bought secondhand from a local dealer. We simply do not have the budget to buy new, although we do make a point of buying well known brands. We have, jointly with the school, purchased a field spiker and are also proposing the purchase of a chain harrow and field roller in the near future."

"The Graden and Sisis Auto-Rotorake used for end of season renovations are hired from the WAG trailer."

Machinery is serviced by Trevor Evans, a mechanic from Hanley Swan.

"The local flora and fauna is important to the club, so we try to manage the surrounding environment sensitively. There is a field next to our outfield that is left uncut to allow wildlife to establish, as well as the hedges surrounding the ground, which are maintained carefully to allow plants and animals to thrive."

"At my club, the groundsmen are not undervalued, as many members get their hands dirty and appreciate the hard work that has to be put into the facility. But, the industry's profile could be raised at a higher level if the international and county sides had a better understanding of the work that is put in. This would not only set an example but would filter down through the numerous levels of the sports so that others might follow by example."

Clearly, Todd has a wise head on young shoulders and we wish him well as he progresses his career.