Dunedin's Island Park Golf Club greenkeeper Michael Minty was back in his kayak yesterday, inspecting damage to the course after last week's rain. 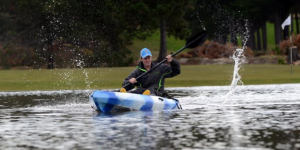 Two days after the deluge, Mr Minty launched the kayak to check the Waldronville course.

He was paddling around yesterday collecting marker pegs, tee blocks and rakes in preparation for the tough task of getting the course back into playing condition.

''On Friday, there was still some water flowing on to the course and down the lower end, the water was two feet [0.6m] deep in places,'' Mr Minty said.''There was widespread debris, while marker pegs, tee blocks, plastic rakes and some rubbish were floating on the water.''

''When the water is all gone, I have a lot of work to do which will include repairing blown-out drains.''

''There may be some play in the weekend but that decision will be up to the committee.''