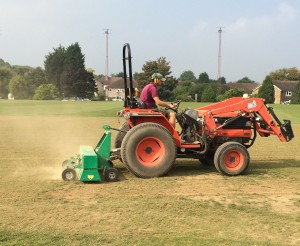 Southern Sportsground Services are a contracting firm based in Surrey. They are old friends with Graden equipment having commenced a relationship with the brand some 10 years ago.

Started by Roger Ward in 1990 he has been supported by son Ollie since 1999 along with five other staff.

They initially heard about Graden equipment through the original importer Keith Kensett and firstly took delivery of a Graden GS04 pedestrian model - adding to it two years ago with a tractor-mounted GBS1200 model. They work for about eight cricket clubs on a yearly basis and usually do around ten end of season renovation projects in the autumn. The main use for their Graden machinery is to scarify cricket squares, but can additionally be used on outfields and the occasional football goalmouth where they use it as a rotovator to churn up the ground before reseeding - a bit unconventional they say, but it works!

Ollie Ward, "You will never really be able to get all of the thatch out of a cricket square without completely taking the top off, but I'm continually surprised by the amount we remove using the Graden equipment! The amount is incredible when compared to the old Autorake we used to use. Also, with the tractor mounted GBS1200, we can now scarify a cricket square in three different directions in about an hour - completing almost two full cricket square renovations in a day."

Ollie also believes the speed of the GBS1200 does not compromise quality as he still gets an excellent result, as good as the GS04 pedestrian model, but over a wider working width. They find use for the GBS1200 every day for the 4-6 weeks of their renovation work period in the autumn.

Ollie again, "The Graden products are extremely robust and very little has gone wrong with them since we've had them. Replacing worn out items will depend on the conditions they are used in, or how hard they are used, but we believe it'll be one to two years before we'll have to replace the blades."