by Dr Colin Mumford
in Consultancy, Conservation &amp; Ecology, and Industry News
on 29 May 2015

0 Eliminate stress and disease to achieve a playable, green, turf surface this summer-55697dfb14028 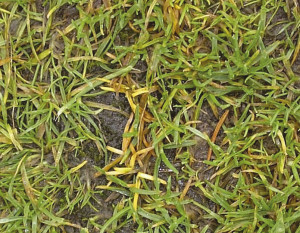 Turf managers face a year-round battle to keep weeds and disease under control, and to keep their turf in tip-top shape.

Dealing with persistent weeds and pests, and quickly reacting to adverse weather conditions, forms a key part of the turf manager's role today. Now that we're into summer, at a time of year where disease risk may be lower, don't get caught off guard, as unpredictable factors can still threaten your turf health.

Stress, in particular, has a knock-on effect on turf quality and, of course, foot traffic can cause a lot of damage. But weather extremes, such as heat and drought, along with continual mowing, can also take their toll.

Diseases such as Foliar Blight, Anthracnose, Microdochium Patch (commonly referred to as Fusarium), Red Thread, Dollar Spot, Leaf Spot and Rust can present different challenges for managers, and make an impact on the overall look of the turf. Ultimately, substandard turf can affect players' performances.

Among the most damaging summer diseases on golf greens is Anthracnose. Once it takes hold, it can be very difficult to control. "And 2014 was a very bad year for Anthracnose, with high levels of turf stress because of the record breaking temperatures, conditions were particularily condusive for the disease," according to Dr. Colin Mumford, Technical Support at Bayer.

Anthracnose Foliar Blight and Basal Rot caused by Colletotrichum spp, are primarily diseases of Annual Meadow Grass (Poa annua) under stress conditions. The disease is most common on golf greens and most often occurs mid-summer as Foliar Blight under hot conditions and often develops into Basal Rot if left untreated.

"Foliar Blight develops on older leaves first and is most common in the summer. Often Foliar Blight can be mistaken as drought stress causing the turf manager to respond by applying water, however this will develop favourable conditions for the disease. It is best to diagnose early and alleviate the stress conditions. Basal Anthracnose can develop from Foliar Blight or independently during periods of cold, wet weather. Since it often occurs when turf growth potentials are low, recovery from Anthracnose can be difficult," says Colin.

Common pests also play havoc on pitches and greens. Chafer grubs have a devastating effect on all turf surfaces, not just because of the damage done by the grubs themselves, but also because birds and mammals dig holes in the green to get to the grubs.

One of the best ways to help to keep turf healthy is to make sure it's in great condition by giving it the best chance when it comes to standing up to stress, pests and disease.

Help is at hand in the form of Interface®, the most advanced turf formulation from Bayer yet.This fungicide has been developed using Stressgard™ Formulation Technology which is the result of 15 years of dedicated research and development. Specifically designed for turf, it has been fine tuned to upgrade the performance of the product, providing superior disease control and visibly healthier turf.

As a broad spectrum fungicide, it offers turf professionals control measures against the six main turf diseases. As well as its treatment of key diseases, it also helps enhance turf quality.

Interface® contains a combination of the active ingredients iprodione and trifloxystrobin, and co-formulants that perform specifically in unique turf stress conditions. Trifloxystrobin can be used to assist in stress reduction on turfgrass. "Trifloxystrobin reduces oxidative stress in plants, resulting in increased tolerance to drought, and it's been proven to improve turf quality under drought stress conditions," says Colin. This comes as welcome news to turf managers needing to keep the turf looking healthy and performing well during the hot summer months.

It can be used at any stage of disease and at any time of the year, making it a convenient and flexible option. For the summer months, it reduces the impact of harmful ultraviolet radiation, whilst still allowing the blue, green and red light wavelengths used by turf plants for photosynthesis to get through.

"A lot of other products that protect against UV stress block all radiation, including the blue, green and red wavelengths, and may actually injure plants by reducing the photosynthetically active radiation (PAR), which is the light required for photosynthesis," explains Colin. The degree of selective radiation and light filtration has not been scientifically documented for non-StressGard™ Formulation Technology products.

Colin says that the pressure is on for turf managers because players want 100% grass cover that not only looks nice, but also performs well. A dip in the canopy, and bald, uneven patches, will affect the roll of the ball and player surface interactions.

"As well as using the resources available like weather forecasting tools, it is important to inspect your turf everyday, and react straight away. Early control is key. The sooner you treat the problem, the easier it will be to minimise scars and lasting damage.

"I've used Interface®, for around the last 15 months. I've used it throughout the year at peak times of disease. It has been applied in spring, summer and winter, but each season is different, and very weather dependent," says Ryan.

Ryan says he used it to treat Leaf Spot, which is not a huge problem, but one he's getting more of.

"It's a brilliant product, and has shown fantastic results when treating Leaf Spot, eradicating it thoroughly and quickly - and this is important because one day the pitch can look fine, and the next it can be yellow, and thinned out, because it's riddled with disease," he says.

Ryan says colour is very important, because the fans want to see a vibrant green pitch when they watch their team, and also when the match is televised, so the pitch has to look healthy.

Joe Bedford of Hollystown Golf Club trialled Interface® on Rust. He also had a small amount of Anthracnose due to heat, and time of year, plus green stress.

"Interface® helped in relation to drought resistance - it helped during that hot dry period to maintain the turf's moisture. Greens sprayed stayed green and healthy during the whole trial," says Joe.

Joe believes that new products such as these, which take a 'multi-pronged' approach to disease control, seriously help keep the greens in good condition.

"With preventative, curative and eradicative properties, it can be used at times of the year when other products can't, and therefore acts as a core rotational product for turf professionals," adds Colin.

Some of these benefits may be available separately in fungicides and plant health products, but Interface® with StressGard™ has these proven technologies already built in. Therefore, these benefits add up to improved disease control, enhanced turf colour and density, and overall improvements in turf quality.