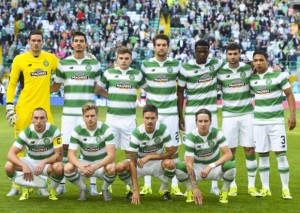 A spokesman admitted the pitch at the Tofiq Bahramov Stadium in Baku "was not ideal" currently.

This follow reports that areas of the surface had been badly damaged by the heat in Azerbaijan's capital.

But work will be carried out between now and kick-off with Qarabag confident it will allow the game to take place.

A Uefa statement said: "There are no plans to change the venue and the match is scheduled to go ahead as planned."

Celtic assistant manager John Collins says the Scottish club's officials inspected the pitch on Monday and admitted there are concerns over the quality of the surface but believes the match will definitely go ahead.

"(There's a) little concern at the moment but we'll go over it and we'll train on it and we'll check how it is," he said.

"At this level you expect the pitch to be of a good standard but if it isn't we'll just have to adapt our play."

For the full article, visit www.bbc.co.uk.