The Celtic Manor Resort, in Newport, South Wales, has boosted the aesthetic of its Golf Clubhouse front with the addition of a new Otterbine water feature 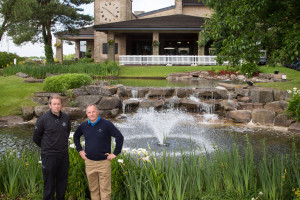 Installed in the resort's two-tiered ornamental pond in front of the clubhouse, where two of the world-class golf destination's three championship courses start from, the ½hp Fractional Aerating Fountain and Mixer Series has been fitted with a 2 LED Light Set.

"It's made a great impact visually," he says. "It has two tiers, a waterfall and lights - which all looks fantastic, especially at night."

And the new fountain isn't only impressing the golfers, says Jim. "As well as our three championship courses - The Twenty Ten, Roman Road and The Montgomerie - The Celtic Manor Resort also has 400 hotel rooms, so the addition doubles up as a feature for our other guests, and has even become a popular backdrop for wedding photography."

Aside from aesthetic appeal, another key reason for deciding on Otterbine was the resort's strong relationship with Otterbine distributor Lely UK, also sole distributors of Toro in the UK.

Jim explains: "One of the main reasons for choosing Otterbine was the great relationship we have with Lely - we're 100 per cent Toro here, with a full fleet of Toro mowers and utility equipment. We have been working with Lely for 23 years and have invested over £1 million with them over that time!"

This latest investment however, was not large. In fact, Jim says he was pleasantly surprised by the price. "It wasn't expensive and has really boosted the look of the Golf Clubhouse. We have a couple of large lakes under development at the moment, so will definitely be looking into investing more heavily in Otterbine equipment in the near future."