by External source
in Industry News
on 29 Mar 2015 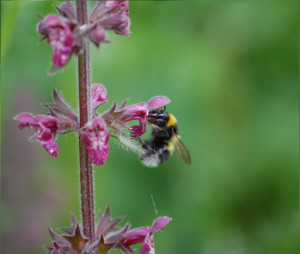 The pollination service provided by bumblebees on the field-side boundaries of hedgerows may be limited because farming methods are having a negative impact on their sources of food, a study has found.

Research by ecologists at Plymouth University has shown some of the most common species of bumblebees are more than twice as likely to visit flowers on the road-facing side of hedgerows compared to crop-facing boundaries.

Writing in the Journal of Insect Conservation, they say this can be attributed to the pesticides and fertilisers used on crops, and they are dramatically reducing the bees' potential habitats.

But they suggest there could be a simple way to address the problem, by encouraging farmers to leave a greater barrier between their crops and hedgerows so as to lessen the effects of chemicals and encourage wildflowers to flourish.

Dr Mick Hanley, Lecturer in Terrestrial Ecology in the University's School of Biological Sciences, conducted the study alongside BSc (Hons) Conservation Biology undergraduate Josh Wilkins, and they examined bumblebee habits at 30 sites across Devon and Cornwall.

"There have been hedgerows and field boundaries in these locations for centuries, and even if you go back 50 or 60 years, you would not have seen this phenomenon," says Dr Hanley. "Both sides of hedgerows would have been flourishing, and bees and other insects would have been numerous on both sides, but that was before an increase in the use of fertilisers. Now what you see is the chemicals having impacted one side, with the hedgerows in effect acting as a filter to protect the road-facing edge. It decreases the bees' sources of food and, therefore, has the potential to impact on their numbers."

In recent years, the global decline of many different insect pollinators has been established and this has been largely attributed to habitat loss and fragmentation, and the direct and indirect impacts of pesticide use.

In the current research paper, the scientists say that organic farming may offer some advantages for pollinator conservation since it reduces field margin exposure to agro-chemical inputs.

But since conventional farming will remain central to global food production, they add, modifications to current practices (such as the use of wildflower strips) may be needed.

"The pesticides and fertilisers in use today tend to mean plants such as nettles flourish, whereas honeysuckle and other bee-friendly species do not," Dr Hanley says. "But we would argue that if farmers were a bit more sympathetic, any work they do to encourage bees and other insects could have reciprocal benefits for them and their crops. Bees and pollinators fulfil a vital role in the ecosystem services of this country, and there is legislation in places which would allow farmers to do more to support them."