0 Blasting weeds away with grit

The timeless struggle against weeds is especially tough for organic farmers, who avoid using highly concentrated toxic herbicides in favor of chemical-free methods like hand-pulling, soil tillage, and scorching. These methods are time-consuming and expensive, and they tend to be less efficient than standard herbicides. Fortunately, the war on weeds has a new non-chemical weapon to add to its arsenal: a machine that obliterates weeds by "blasting" them with grit. 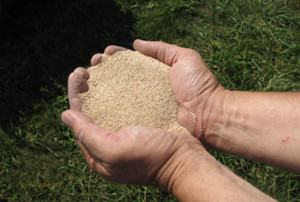 Forcella got the idea while he was daydreaming about uses for the five gallon bucket of apricot pits he had lying around the house. "It just seemed wasteful to throw away all these pits, and it got me wondering what the apricot industry does with them. It turns out they sometimes grind them up and use the grit in sandblasters."

"Out in the field one day, my colleague and I thought, 'What if we could adapt the sand blasters to control weeds?'" said Forcella. "We kind of laughed it off but the idea didn't go away."

A little internet research revealed that a small sandblaster wouldn't break the budget, so they gave it a try. They bought a tiny sandblaster and, using corn cob grit, they tested it out in the greenhouse on common weeds growing alongside corn.

"When the corn is about six to 12 inches tall, and the weeds are just poking up, you blast them for just a split second with the corn grit and, sure enough, the weeds disappear," said Forcella.

With this timing of the pelting process, the strong, established corn plants remain intact and can continue to grow. But the tender leaves of the emerging weeds succumb to the blasting process. Without the leafy tops on the weed plants to photosynthesize, the weed's root system withers away, and the weed dies.

After determining which stage of plant growth is best to apply the grit, it was time to take PAGMan to the field. Forcella used a bigger unit mounted on an off-road vehicle in a corn field, and, "Lo and behold it worked!" said Forcella. "We found that we could get 80-90% weed control, and with that kind of control you have zero crop loss."

The blasters target weeds that sprout among common row crops such as soy and corn. Two applications of the grit treatment work best and should be applied when the crop is tall and strong enough to be unharmed.

Forcella approached organic farmers with the grit-blasting method, some of whom suggested improving the idea by substituting organic fertilizer - something farmers have to apply to the soil anyway - for the corn cob grit. "Many fertilizers, like limestone for instance, just happen to have a granular gritty texture," said Forcella. "So farmers can apply the fertilizer and simultaneously blast the smithereens out of weeds."