by Louise Prettyman
in Industry News
on 28 Jul 2015

City Airport, Manchester, not to be confused with Manchester Ringway Airport, has all grass runways for light aircraft

It has quite a bit of history becoming one of the first municipal airports for passengers in 1934 and boasting one of the oldest operational controls towers in the world. Lee Pattison is Facilities Manager and began a programme of improving the surfaces when he joined 18 months ago. 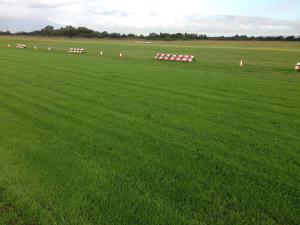 "All my predecessors seem to have only ever done was mow the grass," said Lee. "A lot of the equipment was also very tired and old so the first thing to do was to compile a wish list. The Head Groundsman at Salford City Stadium put me in touch with Campeys machinery dealer, who in turn advised me to speak with John Hughes at DLF with regard to the grass. Best piece of advice I've ever had - the advice and backup service that John has provided has been excellent."

John Hughes advised that Pro Master 80, for rapid establishment and wear tolerance, would be the most suitable mixture for this unique requirement. They first tackled a taxiway, an area that was subjected to a lot of wear and tear, and made it into a test plot.

Pugh Lewis were the contractors and they started with a stone burier to churn up the ground before levelling it; rolling it and then seeding. Lee was pretty nervous as this area was pretty bad but the seed germinated well and has turned into the best area on the whole airfield.

They next moved onto two areas of the extension runway, on which planes will actually land, at the end of the first quarter 2015. As they have two runways parallel to one another one has to be closed while the work was carried out. They are confident the grass will be as successful on this area of high activity but will give it 2-3 months before re-opening it - next year they hope to sow a whole runway or a larger part of the runway.

All at the Airport were as pleased as Lee with the result of the demonstration area, especially the Operations Manager, and are looking forward to as good a result on the part of the runway currently in renovation.