0 A world without Oxygen? 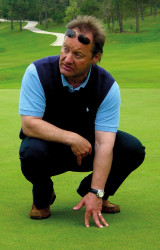 In a world without oxygen, there would be no life. Yet, in the world of sportsturf management, as professionals you are expected to maintain high quality turf when, in many areas, shade and compacted soils make the job virtually impossible.

Nearly all organisms require oxygen - bacteria, plants, and animals. Humans, for example, can go weeks and even months without food. They can survive for many days without water, but they cannot survive more than a few minutes without oxygen.

Life is a balance and that certainly applies to the soils in which we try to grow grass. In an ideal world, we would have 50% soil, 25% water and 25% air; unfortunately, it is nearly always the air (oxygen) the soils are continually lacking.

In this ideal world, turf managers would aerate as often as possible, with different tines, at various depths. Unfortunately, as we know, this upsets too many people, i.e. golfers! Aerification, in particular on golf greens, is one of the most disruptive practices undertaken, but it is also one of the most vital. However, some of the new technology is less time consuming.

Aeration is all about reducing compaction, but mainly increasing the percentage of oxygen to the rootzone. Why?

The first group, 'the good guys' are those which use oxygen to be prolific - aerobic. Then those which can survive in low or oxygen rich environments - facultative anaerobes) and, finally, those which do not use oxygen - anaerobic.

The more air you have in the soil, the more prolific the aerobes will become. These aerobic metabolisms consume oxygen for cellular respiration, releasing carbon-dioxide, water and nutrients for the roots to use and drink.

We have all seen a green-up around a tine hole a day or so after aeration. This is because we have suddenly helped the oxygen using microbes become much more prolific. They, in turn, produce CO2 and solubilise nutrients for root uptake; all we need to do is produce this effect over the whole playing surface on a regular basis, which is difficult when just using tines and machinery.

Remember, plants get approximately 80% of their required CO2 from the soil, and this can only be achieved in a well aerated growing medium.
Aerobic bacteria out compete pathogenic bacteria, which will result in less disease pressure.

Turfgrass stress can be reduced by ensuring there is enough air in the soil. Golfers don't like aerification and greenkeepers are often under pressure to reduce and sometimes skip aerification.

In these cases, where extreme pressure is on the course manager due to tournaments, visiting parties, as well as the club's own competitions, then chemical (Oxy-RushTM) aeration is the only option open at this time.

On the surface, greens appear to be fine, however when there is not enough air in the soil, roots do not grow and grass without roots will not provide a good playing surface for long.

If we add into the mix extreme weather conditions, this makes the job of the greenkeeper a huge challenge.

The photograph above illustrates how we can see the hollow core holes, with vertical strips through the soil profile with no black layer. When there is enough air in the soil, approximately 25% air by volume is a good starting point, the roots can grow.

As groundwater moves through soils containing minerals of sulphate, some of these minerals dissolve in the water. 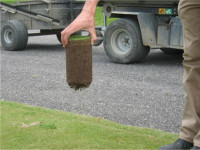 When oxygen soil volume is reduced below 10-12%, plants cease to function anywhere near their optimum. Reduced oxygen also modifies the decay process of organic matter and thatch, as well as the oxidation process of soils. As soil oxygen concentrations become limited, anaerobic microbes take over. This shift in microbial populations from primarily aerobic to anaerobic organisms introduces a new set of soil reactions. Some of the new soil reactions are an increase of partially oxidized organic acids, alcohols, ethylene gas and inorganic compounds.

These compounds build and become toxic to plants.

Iron and sulphur or manganese and sulphur can precipitate, which contributes to plugging of soil pores and can lead to the formation of black layer. With an increase in pathogenic bacteria, nitrogen conversion is slowed and tends to accumulate in the rootzone increasing disease pressure.

Any fertiliser applied to anaerobic soils will not be effectively broken down and used. They will either leach out, potentially into water courses, wasting valuable budget or, worse still, build up in the organic matter, which can cause a host of problems if not correctly managed.

It is also important to remember there are billions and billions of bacteria already in the soil; it is not necessary to add bacteria, we just need to ensure these bacteria have enough oxygen and food (carbon) required to create strong sports turf.

So how can we tackle these issues as turf professionals?

Oxygen is the backbone of healthy soil.

Oxy-RushTM is available through the Pitchcare online shop