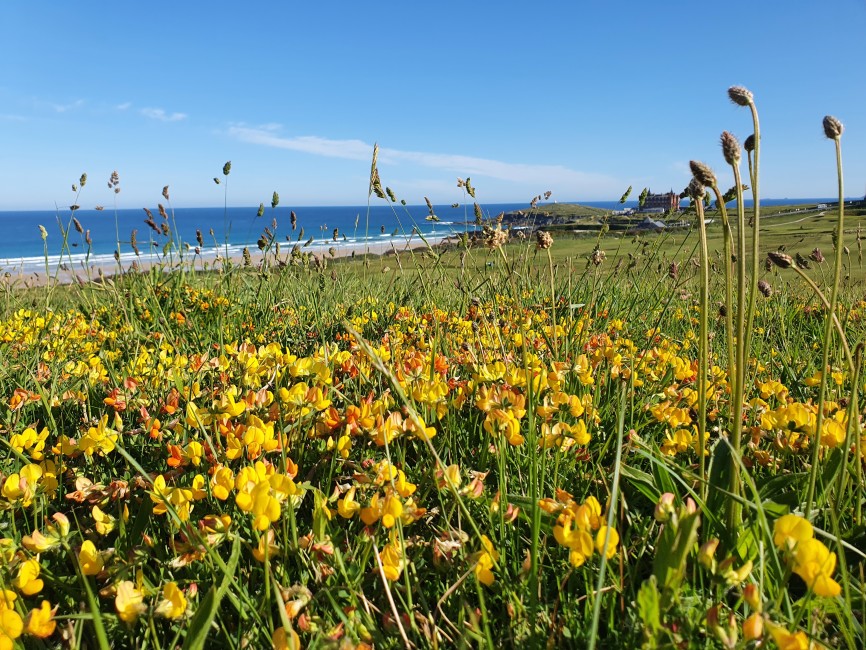 The aim of the Golf Environment Awards (GEAs) is to recognise, reward and promote outstanding individuals and golf courses, no matter how big or small, for the time and effort they have put into protecting and preserving their unique surroundings.

“I was hesitant at first because I saw what some of the other amazing courses had achieved and I wasn’t sure if we stood a chance,” said Dan Kendle, Course Manager at Newquay Golf Club. “However, a few people encouraged me to enter, and we were selected in the Operation Pollinator category.

“Just being included in the list of finalists was an achievement, but to go on and win it was mind blowing. It is something I am passionate about and my background before greenkeeping was conservation so I’m always trying to combine the two.”

“I first spoke to David Bevan at Agrovista Amenity to explain what I wanted to achieve, and it was at this point he brought in Matt Gresty (MM and Designer Sales and Brand Manager for DLF UK). I explained that I didn’t want just a standard mix of wildflowers and that I wanted flowers that are native to my site. Matt went away and put together a wonderful mix and that was one of the main reasons we won the award.”

Appropriately named the Newquay Wildflowers, the mixture contained 24 flower species including Vipers Bugloss, Yellow Rattle, Common Toadflax, Dark Mullein plus five various grass species. Dan and his team created the first area in autumn 2020, and then started rolling it out to other areas on the course.

Not only have they provided a rich, colourful, and diverse ecological habitat but they have also wowed the public and members by offering great aesthetic value.

“We’ve seen a huge increase in the numbers of different butterflies and bumblebees, and we have also been getting rare species of birds including the Cornish Chuff. I record everything on the course, and we’ve had 8 species that are on the red list. It really is wonderful to see the course so alive with wildlife.

“The feedback has been fantastic too,” continued Dan. “We have a public footpath that runs right through the course, and one of the wildflower areas is in full view. So many members of the public have been stopping to take photos, and have been asking questions, so we gladly tell them about Operation Pollinator. The members are also on-board with the project and can really see the benefits.”

The ever-modest Dan was also quick to acknowledge the support of those around him and revealed that he plans on further extending the wildflower areas.

“Winning the award still hasn’t sunk in,” he said. “It is as much for my team as it is for me – and they should be proud of themselves. David and Matt have been helpful and I’m looking forward to working more closely with them as we create more wildflower areas.

“Awards such as these are incredibly important because there is still this stigma that golf courses are sterile environments pumped full of chemicals, but that could not be further from the truth. Look around the country and you can see what golf courses are doing now – it’s amazing. I’m delighted to be a part of it.”