Working to meet the demands of a growing interest in cricket, the one-man grounds team at Kineton Sports and Social Club channels a passion for the sport to maintain high standards. Jane Carley talks to sole groundsman Andrew Cartledge who is tasked with looking after the seventeen acre site. 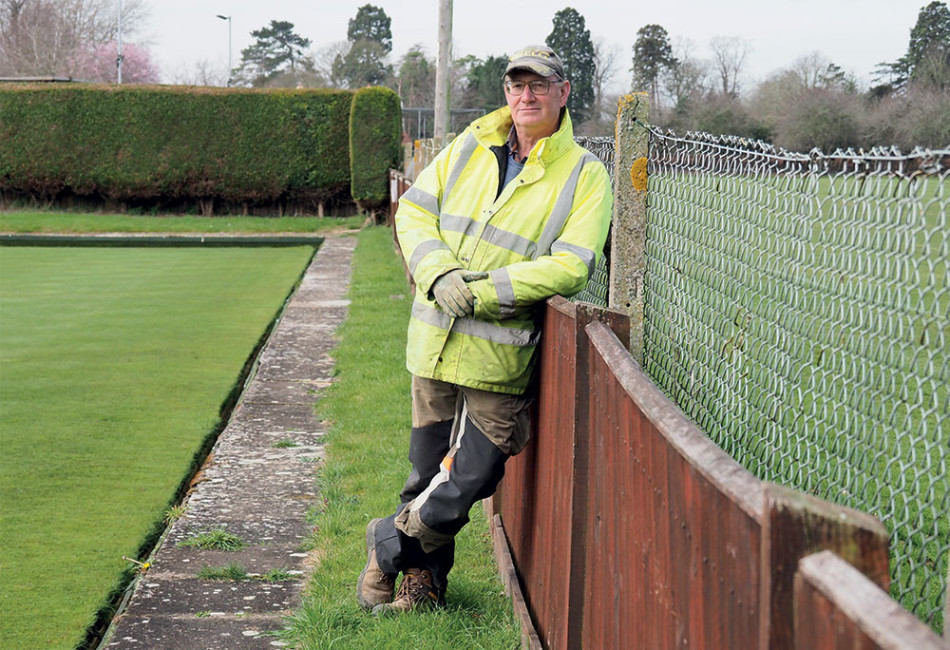 On a beautiful spring morning, there’s no ﬁner place to be than the village cricket pitch, looking forward to the season ahead, especially when that pitch offers panoramic views of historic Edge Hill. And, at Kineton Sports and Social Club in Warwickshire, cricket is just part of the activities that this hub of village life offers.

A registered Community Amateur Sports Club, the seventeen-acre site started out on a smaller plot of land off Bridge Street as Kineton Cricket Club in 1877, and the Verney family, whose nearby stately home of Compton Verney is now an art gallery, are mentioned in old documents as being supporters. The original pavilion remains close to the street, having been succeeded by a more modern building further along the access road which will itself soon be replaced.

The first football pitch followed in the 1950s, home to Kineton United and Kineton Wasps, although the local sides apparently played at many different grounds and are recorded as holding meetings at several of the village’s (then) numerous hostelries. At some point, the main pitch has also been rotated to run east-west rather than north- south.

The clubhouse – given a major upgrade post-Covid – was built in 1968, the bowling green laid in 1970 and Kineton Sports and Social Club was formally born in 1976. 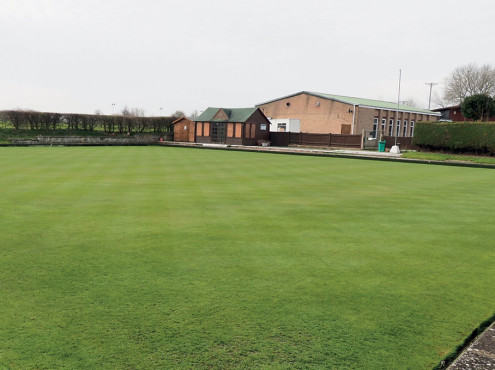 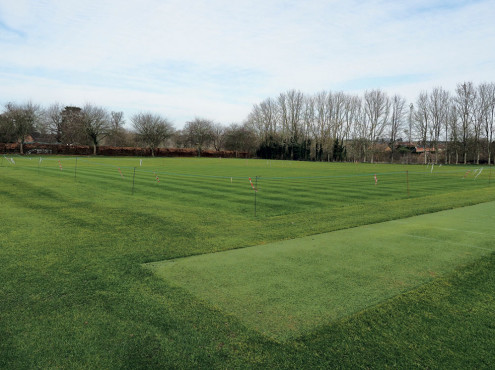 Left: The bowling green, established in 1970, has seen an inﬂux of earthworms, but sportsturf soil acidiﬁer seems to be helping, as well as discouraging other pests Right: The square being prepared for the season ahead

“It’s a typical community facility, run by a committee and volunteers,” explains groundsman Andrew Cartledge. “I was chairman of the cricket club for ten years and started out by helping the then-groundsman, taking over when he retired. We’ve seen a strong growth in cricket in recent years, and the aim is to maintain high standards for cricket, bowls and football, whilst bearing in mind that the grounds are also used for many other community activities.”

These include everything from an annual music festival to monthly classic car and bike rallies through the summer, a Civil War re-enactment and increasingly popular caravan rallies. The Queen’s Platinum Jubilee will be celebrated with a number of activities.

Kineton Cricket Club plays in the Cotswold Hills League, with senior teams in the Premier and 5th divisions. In the Warwickshire Junior League, U10, U11, and U14 teams are represented, with the Girls also playing softball. The club has seen an increase of 50% in cricket pitch use over the last ten years

“We have a ten strip square, which was extended from six, but the middle strips are better as one at the end slopes. With juniors playing mid-week and Sunday morning, plus the Arden League on a Sunday, there can be four or five matches a week, plus junior cricket training on a Thursday and Friday night, which puts a lot of pressure on the square.”

Nets and covers have been funded with ECB grant aid

He comments that while he would love to have the budget for a major renovation by fraise mowing the pitch, the reality is that he has to work within the bounds of what is economically feasible.

“Club membership fees only go part way towards funding the work done, and I’m part-time so I’m conscious of the hours that I’m charging for. All of our equipment apart from one mower is second hand.”

Attention is paid instead to continual renovation, Andrew applying 2-3 tonnes of topdressing by hand using a lute and drag mat.

Cricket square preparations involve regular cutting to gradually get down to 5-6mm and feeding with a granular fertiliser in spring.

“We have to be low input in the season as it’s hard to find a window, although I will feed a track that is going out of use. I’m flexible on cut height once fixtures have started, depending on the conditions and the ability of the players.”

Time pressure leads to a five-day, rather than ten day match preparation. 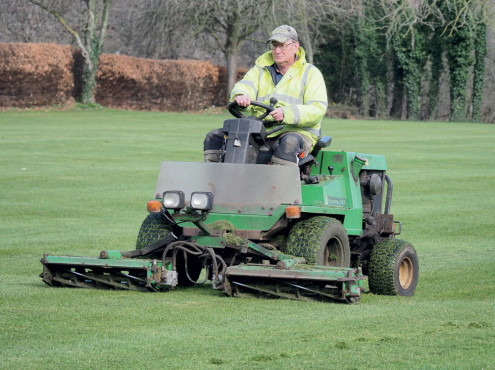 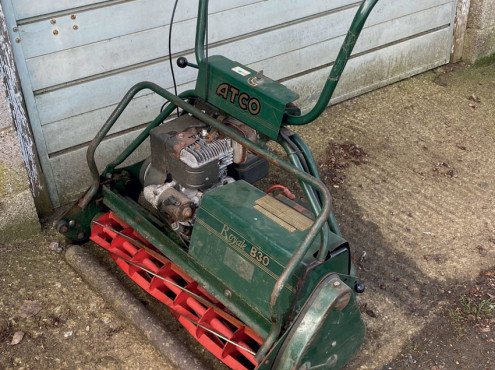 Left: Machinery such as this Roberine triple is carefully purchased and even more carefully maintained by groundsman Andrew Cartledge Right: A useful Atco cylinder mower, gifted to the club by a supporter

“On Monday I’ll cut, Tuesday roll, Wednesday cut down to 8mm and verticut, Thursday go down to 5mm and roll, with final preparations on Friday. If time allows, I may start preparing the strips for the following week, but some weeks I can be preparing strips for three different age groups at the same time. I try to make each strip last two or three weeks.”

A grant from the ECB funded the purchase of nets, covers and screens, with the proposed new pavilion also offering a more practical and safer space for players – especially juniors – to gather further away from the access road.

“There are always improvements that can be made,” comments Andrew, “In an ideal world, as well as the fraise mowing, I’d like to add another track or two, and level out the ‘saddles’ where the ends have had more topdressing historically. We’ve got an artiﬁcial strip which is good for junior practice and synthetic grass in the nets, but there’s no maintenance equipment for it.”

Football is played by juniors and veterans, with other sides including neighbouring village Wellesbourne also using the pitches.

“The pitches are on clay, which is a particular issue on the back ﬁeld – although it’s the highest point of the club, they are frequently waterlogged,” explains Andrew.

Football’s extended season squeezes the time window for renovation, so the focus is on feeding and seeding the pitches.

“Costs for the sixty tonnes of sports sand that would be needed are prohibitive, but I did manage to acquire some sharp sand from the builders who have recently completed a housing project on adjacent land, although I appreciate that it’s not an ideal solution,” he comments.

Cooperation with the builders to provide them with a compound was also rewarded by them resurfacing the access road; a much-needed improvement.

In general, the football pitches command less of Andrew’s time than the cricket and bowls, mainly just marking out and cutting, with the occasional spiking. Slitting helps as the winter takes its toll, but he would also like to address some of the levels. 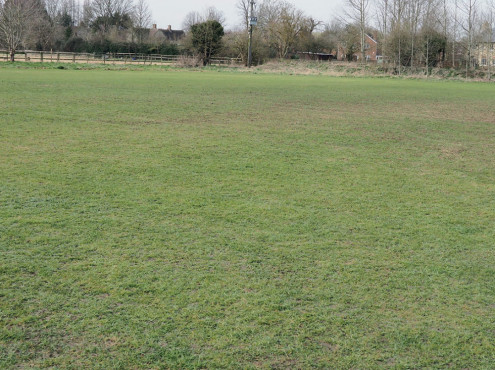 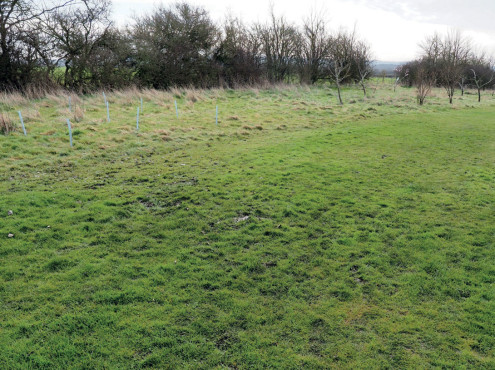 Left: A football practice area, also used for the stage at the annual music festival and for caravan rallies Right: Wet ground in front of new tree plantations, which should help to soak up some of the moisture!

On the bowling green, where members play mid-week in the Kineton and District and the Perkins Leagues, Andrew cuts two or three times a week to 6-7mm. However, contractor Supergrass carries out autumn renovations, scarifying, overseeding and topdressing.

“The green has had a lot of sand in the past, which was not ideal. I aim to verticut it regularly, which has produced good results, and get a good end of season renovation. But we couldn’t justify purchasing the equipment for jobs that are done once a year, hence the use of a contractor,” he points out.

Machinery is purchased carefully and maintained by Andrew with even greater care.

“We had an old grey Fergie and one day it hit a patch of rough ground and that was it. With a very small budget and the requirement for 25-30hp to pull a finishing mower, it was replaced with a second-hand Iseki TL2700. One Dennis FT is twenty years old – it’s like a battleship and easily repairable – but I am conscious that as it’s used for both mowing and verticutting the square, I’m reliant on one engine, and if that goes down I’m in trouble.”

The cricket outfield is cut with a Roberine triple cylinder mower dating back to when the company was part of John Deere; an Atco Royale walk behind cylinder was gifted to the club. 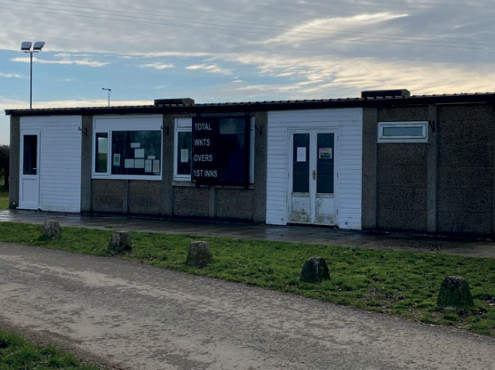 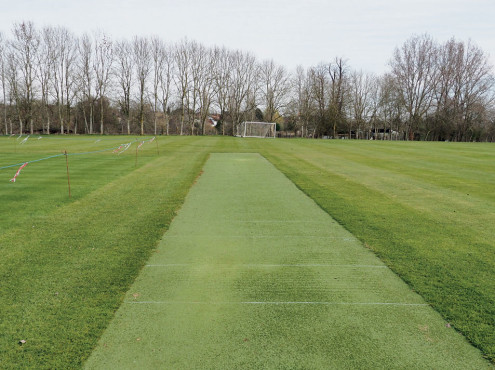 Left: The cricket pavilion, soon to be replaced Right: An artiﬁcial practice strip allows juniors to train even in poor weather

“We had a smart I’ve gang fairway mower which was stolen during a break in,” he comments. “I’d love a new one but it’s not in the plans. We get blades sharpened locally at Hunts Engineering as they now have their own grinder, which is a help.”

Consumables are sourced from a range of suppliers, with general amenity seed used on the square alongside a pure bent from Supergrass.

Worms have proved a challenge over the last couple of years, due, Andrew suggests, to the lack of use during the first lockdown.

“We have lost active ingredients for worm control, which is understandable, but I’ve had some success with a sportsturf acidifier, which also seems to discourage leatherjackets.”

Dry patch is another issue on the bowling green, tackled with Breaker Curative. “You do need to get on top of it before it shows,” he comments.

Andrew is also responsible for general maintenance – from rodding the drains to emptying the bins, – plus some hedge and tree maintenance, although local agricultural contractor Forsyth Farmwork cuts the hedges including the long stretch of beech bordering the road.

A community orchard planted on the boundary between the ground and neighbouring farmland, through which a network of public footpaths access the club, is now starting to flourish. Over the winter, twenty more fruit trees have been planted by volunteers, alongside sixty copse trees sourced from the Woodland Trust’s Trees For Communities’ initiative. A meadow area skirts the secondary pitches, whilst leaving the edges of the ﬁelds unstrimmed is another strand of a move to blend nature with sportsturf.

“The idea is that the more natural boundaries need little attention, but I do go through them and tidy around the trees from time to time.”

With a burgeoning programme of ﬁxtures, and a busy year for the clubhouse, it looks like Kineton Sports and Social Club will live up to its name in 2022 and continue to provide a valuable resource for the community.