Bracken is a plant that has been around for hundreds of thousands of years.

Initially a lowland plant of woodlands the clearances offered it an opportunity to move out of this niche and it has subsequently expanded into a broad range of lowland situations right up to 600m where the limiting factor is frost and wind. A prolific plant, it is tolerant of a wide range of climatic conditions. It is highly disease resistant and is able to reduce competition from other plants by vigorously out-competing them and even exuding compounds, through the rhizomes (underground stems that are capable of producing the stem and root system of another plant), that inhibits the growth of other plants.

Bracken is generally a small component within natural woodland however it can become a problem if trees are cleared. It prefers well-drained sites as the young rhizomes cannot stand waterlogged soils. Within the Countryside Survey (1990) it was estimated to occupy 17,000km2 across the UK. It also forms a habitat favourable to ticks which can transmit Lyme disease.

The Bracken crosiers appear in May using energy that has been stored underground in rhizomes. Where Bracken grows it is generally best thought of as a single plant that is connected by a dense mass of black underground rhizomes that connect the plants together.

Plants require an established root system before fertile fronds are produced, typically requiring 3-4 years. Spore production can be staggeringly high with a single frond producing up to 30,000,000 spores. However spores are probably only important in the colonization of new sites and most growth in the population can be attributed to its successful means of spreading vegetatively through its rhizomes.

An entire hillside can therefore be dominated by a one plant, this connectivity led directly to the effectiveness of the herbicide Asulox that until the 1st of January 2012 was approved for sale on Bracken. Asulox could not be sold after the 31st of December 2011. Although it can still be applied until the end of 2012, practically the only effective time to apply Asulox was when the fronds were completely unfurled and before the plant starts to senesce.

The most effective cultural method is to bruise or crush the unfurling Bracken fronds with a “BrackenBruiser”. This causes the stems to “bleed” and weakens them directly reducing the energy within the rhizomes. This should be carried out twice a year after late May, preferably in late June, early July but before August. This will need to be done for a minimum of three years for complete control depending upon the infestation.

Cutting the fronds is less effective than bruising as the cut fronds repair more quickly however it is recommended to cut the fronds from early June/mid July and then subsequently in late July/early August and a final cut before frost in September. After three years of treatment the number of fronds and frond height have been shown to have been significantly reduced although it has been suggested that further management will be required for eight to ten years to achieve complete eradication.

Ploughing during the early part of the growing season, May, June and July gives good control, particularly if subsequently a cover-crop is grown. This method of control is successful within two years.

There is evidence to show that trampling by sheep, cattle and horses outside of the growing season and when fronds are young, in May, also reduces the number and vigour of the Bracken fronds.

Establishing ground cover that can compete with Bracken will help prevent the Bracken from becoming further established. The selection of appropriate species to compete with the Bracken will vary from site to site though species such as Creeping Soft-grass, Holcus mollis, and Cock”s-foot, Dactylis glomerata, are known to be effective competitors.

Asulam, the Active Ingredient in “Asulox” is the most effective chemical treatment for Bracken as it is selective for Ferns and Docks. Use of this Active Ingredient was withdrawn completely in 2012 by the EEC. However, a proactive group of interested parties known as “The Bracken Control Group” has sought an “Emergency Approval” of asulam for bracken control. This approval has been granted, for the UK alone, in 2013 and 2014. It allowed “Asulox” to be advertised, sold and used solely for the control of Bracken and had a new label placing restrictions on the methods of application and dose rate. The Bracken Control Group intend to make further requests to the Chemicals Regulation Directorate for subsequent years Bracken control, until an alternative effective treatment is available.

A systemic herbicide that can be used for the control of Bracken is picloram, the active ingredient in Loram and Tordon. Tordon can be used up to 1 metre away from a watercourse. Picloram is a selective herbicide which affects broadleaved weeds but will not damage grass allowing the grass to spread into the area previously occupied by the Bracken.

Another alternative is to apply glyphosate through a microwipe weed wipe. Glyphosate is a non-selective herbicide (otherwise known as a total herbicide) that will kill nearly all green vascular plants that it comes into contact with. Therefore care should be taken that the weed wipe is set at an appropriate height to come into contact with only the Bracken.

In accessible areas for ground application and/or where watercourses are nearby and/or where cost is an over-riding factor Roundup can be very successfully used as part of Bracken management strategies.

Timing of control is critical. Successful control using Roundup is dependent on the timing of the treatment in relation to the movement of nutrients and dry matter between the underground storage rhizomes and the fronds. As the fronds develop in spring the reserves in the storage rhizomes diminish. Treatment with Roundup during frond expansion in April, May or June will result in frond death but with little long term effect on the rhizomes as the glyphosate is carried upwards with the nutrient flow. Once the fronds are fully expanded, the products of photosynthesis will start to be translocated down to replenish the underground reserves. Treatment of the fronds as they approach full size in July-August will give maximum translocation and long term control of the stand.

Overall spraying is appropriate for large areas and thick stands. In many instances little or no other plants will be growing beneath the bracken canopy, and, in any case, the bracken fronds will intercept almost all of the herbicide spray. Apply at a rate of 5.0 l/ha in a water rate of 150-250 l/ha as soon as the fronds have fully expanded, usually early July-August. Later timing up to mid-September can still give satisfactory results but must be pre- senescence of the foliage. (In any case it is unwise to carry out treatment when ripe carcinogenic spores are in the air.)

Treated fronds will die back within four weeks of treatment, the Roundup being translocated down into the rhizome network killing both frond forming and storage rhizomes.

Large areas, especially scattered populations or patches in grassland, moorland or heath land, may be effectively controlled using tractor/quad bike-trailed weed wiper. Use of such applicators will ensure superior, cost-effective control of the bracken whilst leaving grass, heather and other plants unharmed.

Weed wipers, such as the microwipe weed wipe make efficient selective application of Roundup, possible. Application is typically 1 part Roundup to 10-20 parts water, according to the weed-wiper manufacturer”s instructions (specific models may vary).

The bracken should be “wiped” at full frond expansion but before they start to turn brown and die back. Optimum control is achieved during July/August. Later timing up to mid-Sept can still give satisfactory results but must be pre- senescence of the foliage. Do not treat when the fronds are wet or rain is imminent. Always ensure a height differential of 10cm between the bracken and the grass to maintain selectivity.

With large plants in dense stands, shading can result in incomplete coverage whether using an overall spray or a weed wiper, leading to some re-growth in the following year. However in many situations using an efficient application technique, high levels of control are possible after just one year. Monitoring and follow-up treatment should be carried out as part of a long-term management programme.

If the Bracken is being controlled in an area accessible to livestock the animals should be kept away from the treated area whilst spraying and for 7 days where spraying is overall, and until the spray has dried on the leaf where spot treatment or weed wiping is carried out. However, it must be noted that treated bracken may become palatable and is of course poisonous. So it may be prudent to exclude stock until the foliage has completely died down if the bracken takes up a large proportion of the available grazing area. This is also important if other poisonous weeds like Ragwort, Cowbane, Hemlock or Hemlock Water Dropwort are present in the treated area. 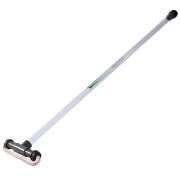