Otherwise described as blue green algae, pond algae, green algae, filamentous algae, blanket weed or cyanobacteria; this is a common problem with waterbodies during the summer months for landowners.

Cyanobacteria are a phylum of bacteria that obtain their energy through photosynthesis. They are arguably the most successful group of microorganisms on earth.

Typically in the early spring, single-celled species can be seen which colour the water green. If a jam jar is filled with a sample from the water, single cells of algae can be seen suspended in the water. As the season progresses other filamentous species are able to grow. These form thin strands that conglomerate and can form a dense mat on the surface of the water body.

Commonly pond algae is a problem during summer months as the temperature of the water in ponds and water bodies increases due to increased daylight hours and nitrogen and phosphates are widely available. This can cause a problem because it discolours the water and can lead to dense mats floating on the surface of the water. Discolored water is an aesthetic issue, but when blue-green algae reach bloom densities, they can actually reduce light penetration, which can adversely affect other aquatic organisms both directly (e.g., other phytoplankton and aquatic plants) and indirectly (e.g., zooplankton and fish that depend on phytoplankton and plants). When a blue-green algae bloom dies off, the blue-green algae cells sink and are broken down by microbes. This breakdown process requires oxygen and can create a biological oxygen demand. Increases in biological oxygen demand result in decreases in oxygen concentration in the water, and this can adversely affect fish and other aquatic life, and can even result in fish kills.

If you are creating a new pond, reduce the amount of daylight that it receives by locating it with at least part of the pond in slight shade, plant up at least one third of the surface with aquatic plants, while ensuring there are also sufficient submerged oxygenators. Select native species that are not invasive. Ideally there should be a minimum pool depth of 75cm (2.5ft) to prevent water warming up rapidly in sunshine, which speeds up algal growth.

There are currently no approved herbicides that can be used for the control of algae however a number of different products which utilise natural biological principles are available. These tie up nutrients with the production of bacteria at the direct cost to algae.

For smaller ponds use a barley straw extract. Extract of Barley Straw is a liquid version of the barley straw bales sold to treat algae in ponds, but because it is a concentrated liquid it works faster and is simpler to use. It acts as a natural algae control, balancing the pond chemistry to provide healthy water, fish and plants free from green water, string algae and blanket weed. Excalibar is not a herbicide. It comes as an easily applied solution, and is harmless to fish and other animals. Because it does not directly kill the algae, Excalibar should ideally be used as a preventive tool, and added in the spring, before the algae begin to grow strongly. It can still be used under algal bloom conditions, but may take some weeks to bring the bloom under control, as the algal cells expire. Suspended algae (green and bluegreen species) succumb to Excalibar more quickly than filamentous types.

Excalibar contains the natural breakdown products from the decomposition of barley straw. Barley straw can be decomposed by different biological pathways, by different organisms.

The process used to make excalibar is very specific, and generates compounds that block the growth of most species of algae. When algae are exposed to these compounds after broadcast-application of the product, some of them adhere to the cell walls of the algae. In the presence of ultra violet light in sunlight, hydrogen peroxide is produced. This appears to interfere with cell division and susceptible algae die-off.

ProCrystal controls swimming or floating unicellular and filamentous algae found in ponds, lakes and all stagnant expanses of water favouring their development. ProCrystal very quickly consumes and degrades the excess nitrogen (nitrates and ammoniacal) and phosphates that algae feed on to develop. The algae die swiftly after treatment because they are deprived of the nourishment essential to their development. Many tests conducted on infested bodies of water show the rapid reduction in nitrate, nitrate and phosphate concentrations in water treated by Procrystal aquatic weed control. ProCrystal aims to promote the numbers of bacteria above the algae, tying up nutrients and outcompeting the algae. Active ingredients are naturally occurring Class 1 bacteria as defined by Council Directive 93/88/EEC. No special precautions are necessary other than maintaining good principles of occupational safety and hygiene according to Council Directive 2000/54/EC.

Black Onyx limits UV light that is essential to algae growth whilst aesthetically enhancing the appearance of the water. Black Onyx is a proprietary blend of non-toxic pigments and dispersing agents. When mixed into a pond or lake, Black Onyx creates an environment which is detrimental to algae formation by reflecting ultraviolet light and at the same time letting visible light in, allowing for a natural looking pond or lake. In a world where light allows algae to produce its energy, no light equals no energy.

Black Onyx can be used in a programmed with ProCrystal for an environmentally efficient and sustainable algae treatment in static and slow moving water bodies. The advantages of using Black Onyx and ProCrystal as part of a programme is that you will be creating a natural environment that is unfavourable to algae development. This programme will work by limiting availability of nutrients and ultraviolet to algae. This will allow for a clear natural looking water feature throughout the season.

Water treated with Black Onyx may be used for irrigation to turf areas and will not harm or stain turf. There are no restrictions on fishing, swimming or recreational water use during and following the application of this product. The composition of Black Onyx is a trade secret. It contains no other components or impurities which will influence the classification with regard to human and environmental risk assessment.

Use Blanket Answer for spot treatment of specific areas. Blanket Answer Aquatic Weed Control is a unique blend of minerals and enzymes to combat blanket weed. Blanket Answer utilises very fine clay particles to remove suspended algae, providing an alternative means of reducing algae rather than conventionally outcompeting them. It is 100% safe for fish and desirable aquatic plants.

Blanket Answer Aquatic Weed Control is simply added to the pond by pouring the mixed powder and pond water from a designated watering can evenly over the surface. The pond will initially take on a milky appearance, but this will clear after about 5 days. 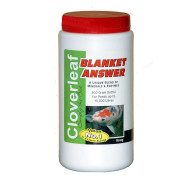