Neil Lowther, Course Manager at Chart Hills Golf Club,
has revealed how utilising a range of ICL products has resulted in
vastly improved fairways and greens. 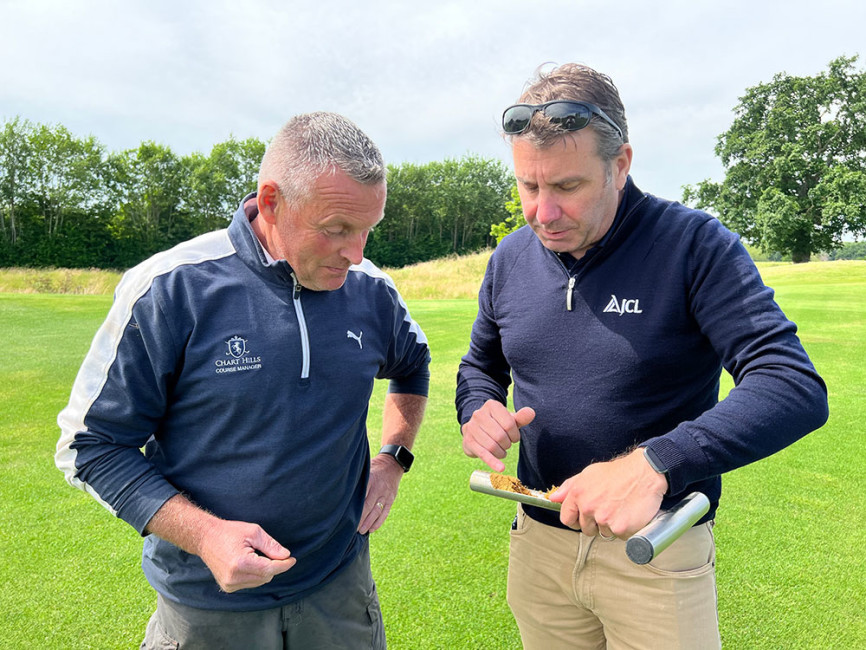 Neil Lowther, Course Manager at Chart Hills Golf Club, has
revealed how utilising a range of ICL products has resulted in
vastly improved fairways and greens.

However, it is safe to say that the club has experienced mixed
fortunes over recent years, but new owners have signalled an
exciting new era.

“From my point of view, I would like to be 20 years younger – it
certainly has been a roller coaster,” said Neil. “Our new owners
are passionate about making improvements and they are investing in
all the right areas so it is nice to have their full backing.”

Neil admits that a lack of investment previously prevented him
from using the products that he wanted to, but the new owners gave
him an opportunity to reassess exactly what he needed.

“After looking at all the nutritional products we were
previously using, we decided that there was no reason to keep
chopping and changing,” he said. “We felt that going with fewer
manufacturers was the way to go, certainly in terms of consistency
and results.

Through independent trials, data has revealed significantly
increased rooting when Sierrablen Plus with Pearl technology is
used as part of a seedbed preparation and during turf-laying.
Furthermore, there was a 2.5 x increase in rooting when compared to
another existing high-performing product. “Craig advised Sierrablen Plus Turf Starter because he felt the
product would help us establish as quickly as possible,” said Neil
“So we tried it on a trial area to start with.

“What I like about this product is that you are incorporating it
into the top part of the rootzone and you don’t lose any nutrients.
No matter how much irrigation you put on, you won’t lose the
product. Also, with Turf Starter being a slow release fertiliser
that releases its nutrients over a 3+ month period, it gave us more
time to concentrate on other jobs without worrying about getting
more nutrition on.

“It had a great impact and members were saying they had never
seen grass establish so quickly. We seeded the area on 21 May and
were cutting regularly on 21 July.

“This process allowed us to demonstrate what was achievable in
that amount of time to the owners and from that point onwards all
our products have been ICL.”

Neil continues to use a range of ICL products from the
Sierrablen Plus range and says Sierrablen Plus Stress Control
15-5-22 fertiliser helped his fairways recover after a Red thread
disease outbreak and loss of coverage at the end of 2021. As part
of his ICL programme, Neil also relies on products such as
Sportsmaster Spring & Summer 9.7.7, Sierrablen Plus Mini 37.0.0,
H2Pro AquaSmart wetting agent on his fairways and a range of
SierraformGT products on the greens.

Pitchcare are an appointed distributor of ICL
products. Visit the Pitchcare Shop to
view the full range