Head Groundsman, Stu Lambert, is hugely excited about the new pitch and has enjoyed the challenge of maintaining an artificial surface.

“It’s been good to be fair,” he said. “It’s bedding in well and the players are obviously enjoying playing on it. It’s a lot different to maintain than the original pitch and this one should be a lot better when the winter months come in!”

Contrary to what some might think, the surface is called a 3G pitch. 4G pitches don’t exist.

“4G does not exist,” the groundsman explained. “It does not exist in anything but phone technology! Every synthetic surface you see with an infill like this is all 3G. It’s the latest 3G on the market.”

There are a few other artificial surfaces in the league with Worcester, Saracens and Newcastle all using 3G pitches, but the new surface at Kingsholm uses newer technology.

“It’s got a thicker yarn within the carpet system. It’s got a green PROgran infill and the reason for that is aesthetically it looks better, you get reduced smell from the rubber, and it reduces the heat and friction from the sun in the summer months.

“Going onto the carpet, it’s got a fibrillated yarn in it. It’s like a webbed system in there. Over time that starts to open up which will encapsulate the rubber so when you see the ball bounce, you won’t get a massive puff of infill. Especially on the third and fourth bounce, you won’t see anything.”

“We’ve got a unique shock pad under here which is called a Brock Pad. The difference is that it’s used a lot in the NFL. It’s a firmer shock pad than the in-situ ones which they glue on.”

“It’s firmer and the idea behind that is to make the game quicker and it helps recovery. It’s passed all the testing and it’s out tested any of the other shock pads out on the market. And it’s recyclable. It’s the first one of its kind in the UK.” 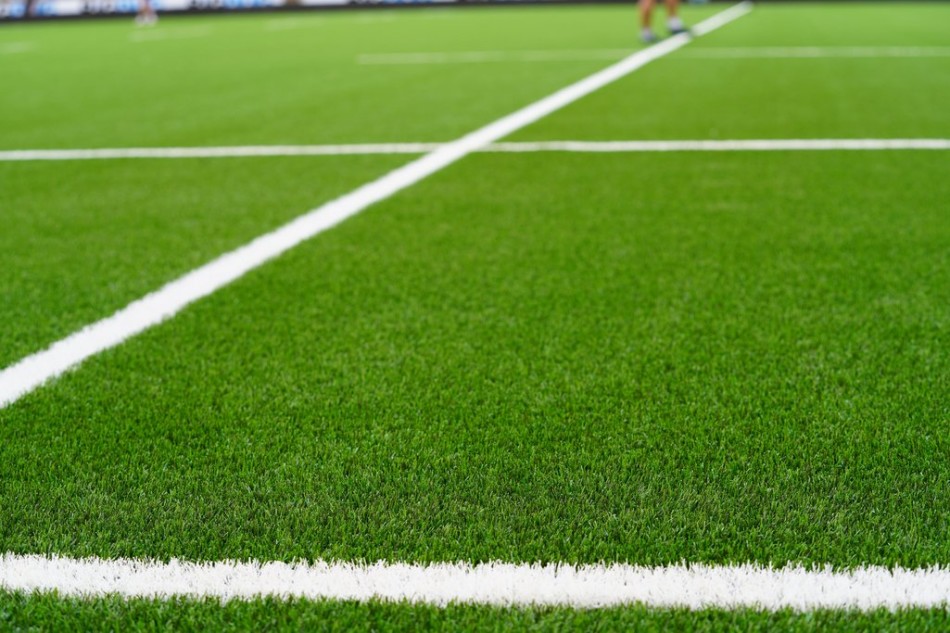 Maintaining an artificial pitch requires a serious amount of effort and Stu and his team will spend just as much time looking after this pitch as they did looking after the original one.

“We’ve got a whole new set of machines,” he said. “The lawn mowers obviously aren’t needed anymore! We’ve got a brush system that we use every morning before every training sessions for the players.”

“We’ve got a sweeper system coming in that will sweep all the debris up. What that will do is sweep and vacuum the debris up and then drop the rubber back down through a sieve so it will keep it clean.”

“We’ve also got a technology called intelligent play which monitors the pitch 24 hours a day. We work with that and it tells us as and when we need to maintain it. It will also tell us where the players have used areas more and where we need to maintain more.”

One of the easiest ways to maintain the pitch is to ensure that it doesn’t get damaged in the first place and one of the quickest ways to destroy an artificial surface is by wearing the wrong footwear.

“Flat sole shoes literally knacker the system. The longer that we can the fibres stood up right, the longer it will last and the better it will be for the players to play on.”

“If we let everyone on the pitch at the end of the game then it would be ruined in 12 months and it would then be a fairly heavy cost to then repair the carpet. We’ve got to look after it in the best way we can.”

It is easy to see if a pitch has been looked after or not. When the wrong footwear is worn, there is an instant tell.

“You can see on the telly that when you look at some artificial pitches, they look shiny. The flat soled footwear flattens the fibres and makes them shine. Whereas ours will look a lot different. Once it starts to go sideways, players are more prone to getting burns as opposed to when it is upright.”

Another key way of ensuring that the players don’t burn themselves is by watering the pitch.

“We’re doing a few experiments with it at the moment. It’s obviously not ideal to be throwing a wet ball around but we’re trying to gage when the best time to water it is. And the best time for the players to feel the benefit of the water coming on.”

“With the water as well, in the summer, it helps cool it down. We’re doing a bit of research into it now and we think it drops the temperature by about 5 degrees, just by putting a shot of water on it.”

“It helps with the burns and reduces the friction as well.”

There is a new indoor pitch in the new training facility which uses exactly the same technology, and it has been great for the club to have the players all training at a Kingsholm base under one roof.