Reece Harvey – whatever did happen at the British Masters I wonder? 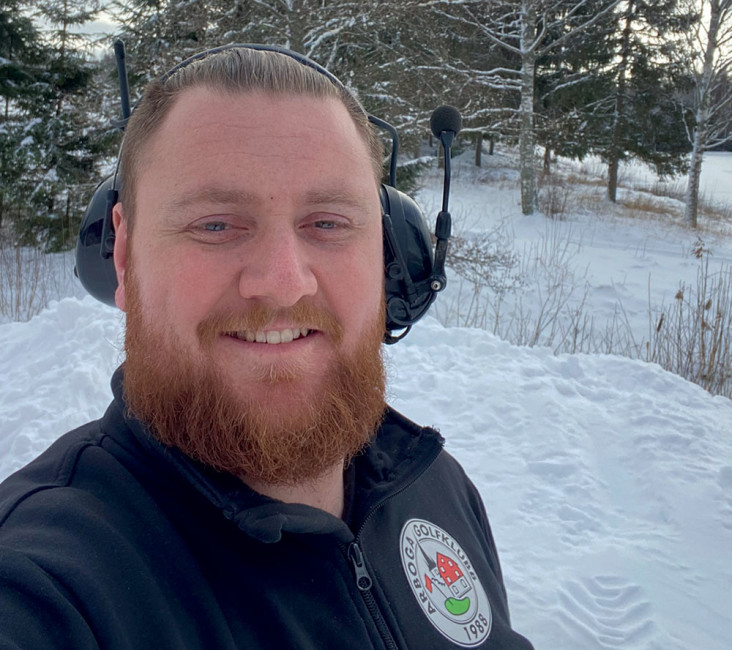 Who are you? Reece Harvey, Banchef (Head Greenkeeper) at Arboga GolfKlubb, Sweden.

Who’s your hero and why? I don’t have one speciﬁc person. but I would say my family as a whole, everyone of them has had a huge impact on me to this day. I moved away from them four years ago and have seen them sporadically due to work and Covid too and I think this makes me appreciate them even more than I did.

What’s been the highlight of your grounds career so far? Getting to work in some amazing countries and on some incredible golf courses. The people you meet will be friends for life regardless of the country you live in.

If your younger self saw you now, what would he think? Wow I got even fatter. On a serious note, I think he would be pretty proud. I never really set any targets for myself and I like to think I go with the ﬂow.

Which famous people wind you up? Most of them, they know nothing of the real world but preach from their ivory towers.

What job would you love, other than your own? The job that I wanted to go into before I started greenkeeping was forensic science so I guess that one for realism. The other one would be football manager as I am not bad at it on the computer.

What was the most embarrassing moment in your life? There have been plenty, it isn’t easy to narrow it down. I think it would have to be a small interview thing I did during the British Masters in 2016. We will leave that one there.

What is your favourite ﬁlm? There is a few that I like; Interstellar, Secretariat, Happy Gilmore, Harry Potter (all of them). To be fair I could go on and on.

What scares you? Doing the same thing over and over again everyday, which is why I love the job I do.

What would your autobiography be called… and who would play you in the ﬁlm? I don’t have the imagination to come up with a title but I would love to say Channing Tatum would play me in a ﬁlm, but probably James Corden with a beard.

What is your favourite sport? It’s a toss up between football and golf.

What would you cast into Room 101? Lifetime Politicians.

Which historical time and place would you most like to visit? I would love to see the Vikings and how they lived.

Do you have a lifetime ambition? Try not to have any regrets.

Which three people, living or dead, would you invite to a dinner party? Ricky Gervais, Amelia Earhart and Nikola Tesla. We would have a good time and maybe learn some stuff.

What’s the best advice you have ever been given? Sometimes you have to look after number one (yourself).

What’s your favourite piece of trivia? A banana is a berry and a strawberry is not.

Which three albums would you take to a desert island? Chris Stapleton – Traveller; Ed Sheeran – X and Zac Brown Band – The Comeback.

What’s the daftest work-related question you have ever been asked? Why are we cutting greens again, we just cut them yesterday. It’s difficult to explain but funny.

What’s your favourite piece of kit? Air2G2, I think its awesome.

What three words would you use to describe yourself? Driven, Loving and Ignorant. The last one is probably about what is happening in the world, as they say ‘ignorance is bliss’.

What is the single most useful thing you could tell a 16-year-old groundsperson/greenkeeper? Just stick to it, it isn’t easy but you’ll get there. Also travel because it’s almost the perfect job to do it with and you can always go back home.

What talent would you like to have? To be able to play the guitar and sing.

What law/legislation would you like to see introduced? Everyone across the world has to learn sign language in school from the ﬁrst year. With video calls, anyone can communicate no matter where you are from.