Watching Colin James complete his favoured chessboard mowing pattern twenty-four hours ahead of Saturday’s home game against Port Vale, it is so apparent this is a groundsman that absolutely cares about his pitch presentation. This is not a televised top table match. It is a mid-table League Two clash. He is seeing that the players and the fans get nothing short of the best. 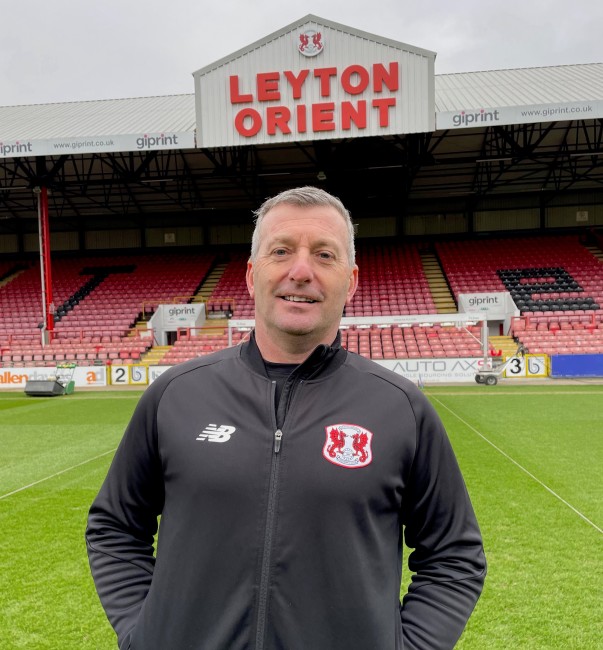 The neatness and precision of the mowing and the dense, even sward suggests a well-drilled team of pros had been at work. Not so. In the best possible sense, appearances can be deceptive. This is ‘basics’ par excellence courtesy of a clubman on a permanent mission.

Colin is the ultimate solo operator. He likes it that way. He accepts the never ending hard work and long hours, and very much savours the pleasing end result.

“I have to plan what I do well in advance of fixtures,” said Colin, after breaking for a chat in the ground’s Justin Edinburgh Stand. “Postponements for weather, and in recent times Covid of course, add to the pressure, but that’s part of being a groundsman, isn’t it?”

When you think you’re getting a breather because there’s an away fixture, with the pandemic things can change in a trice. Last week’s game at Oldham Athletic was called off at the last minute because of that club’s infection rate and the Os manager Kenny Jacket wanted to use the pitch for a serious Saturday training session. That changed Colin’s scheduling for the following week.

“I spent Monday and Tuesday cleaning up surface debris using a Honda rotary, then the whole of Wednesday was given over to divoting. Yesterday, Thursday, I did the pitch length cutting and today you see me cutting across the pitch.”

Colin achieves his precision by meticulous use of line and a Dennis walk-behind trimming to 27mm. The result is pleasing on the eye and defies anything short of total player satisfaction. For the record, the Os and Port Vale couldn’t next day come up with any goals, but that was hardly the fault of the pitch! 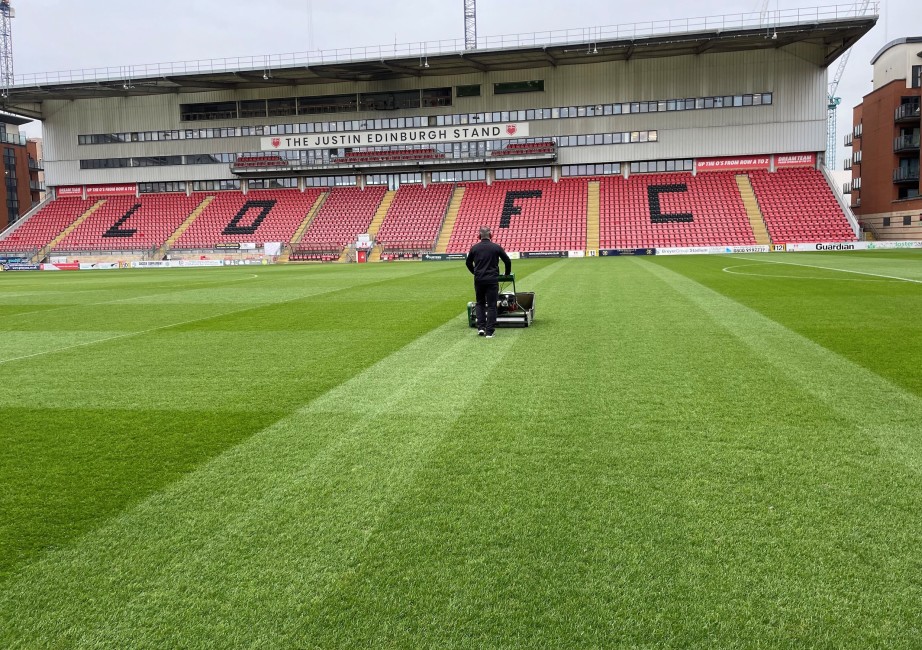 A Covid postponement just after Christmas had meant, close on the heels of the Port Vale fixture, another against Newport County had been re-scheduled for the following Tuesday, It also meant Colin’s solo pitch work would be doubled up. There was going to be a whole lot of tidying up, divoting and chessboard cutting on the Sunday and Monday.

Leyton Orient is one of those clubs that’s always been there, and with a stand-out name that every football fan knows. Like Crewe Alexandra, you do sometimes wonder how come they’re called that? Apparently, in Orient’s case, it has nothing to do with its place on the east side of the capital, but was dubbed thus by an early runner of the club who worked for the Penninsula and Orient shipping line.

It’s the second oldest club in London (Fulham takes top spot) and has come to be known affectionately as the Os. Actually, it only became Leyton Orient in 1946. Before that it was Clapton Orient.

The club has had ups and downs in recent years, as it has in truth, since it began life in the 1880s. In Colin’s fifteen years there he’s seen them on the brink of promotion to the Championship only to lose a Wembley penalty shoot-out to Rotherham, and consecutive relegations taking them out of the Football League into the Conference National. They’re firmly back now in League Two with some hope – albeit optimistic – of getting into a play-off position by the end of the season.

The ground, formerly known as Brisbane Road, became Leyton (then Clapton) Orient’s home back in 1937. Like so many, it now bears a commercial name, that of the club’s owner. The Breyer Group Stadium is surely the only professional football venue in the country with residential property in all four corners of the ground, which is delightful, but a bit of a sun block Colin has to counter with winter use of lighting rigs. 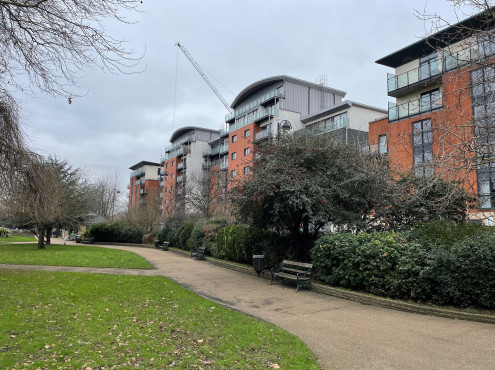 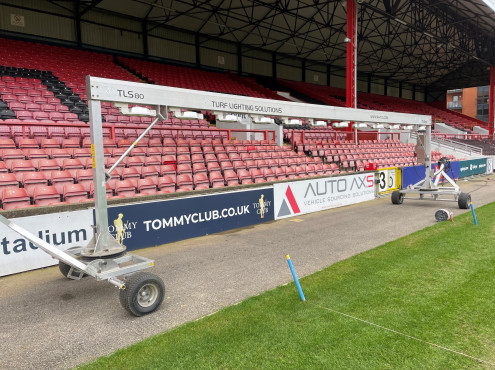 Away fans must wonder where the stadium is as they approach from Leyton underground station. The whole of the south side has a residential appearance flanked by delightful public gardens.

The stadium has a free-draining Fibresand pitch which, Colin says, has required improving from time to time over the years. Though not visible to the naked eye, there is a one-metre corner to corner slope, which poses a surface drainage issue in front of the Justin Edinburgh Stand on the west side of the ground now and again. A fresh sand-slit drainage system, using Mansfield sand, was put in at the end of last season to remedy the problem.

“Five-metre laterials run across the pitch from touchline to touchline into main drains which run the length of the pitch,” said Colin. “It seems to be doing the job well, though there is enthusiasm growing at the club to switch to a hybrid surface.”

Cost and benefits of this upgrade are being carefully examined by Orient’s decision makers. Colin is very keen for this to go ahead. It won’t be this summer however, because there is a short 8-week off-season window owing to the World Cup.

“Hybrids are filtering down into Championship and EFL clubs now and they do, of course, give much more durability,” said Colin. “It would give us the opportunity to fit in more games, which is a potential money earner for the club. We already stage corporate games here and hire it out for commercial interests and film makers now and again, but we would be able to do this much more.”

The drainage upgrade was conducted by contractor Premier Pitches, which handles all end of season renovation for Colin. It has been doing this successfully for a number of years. 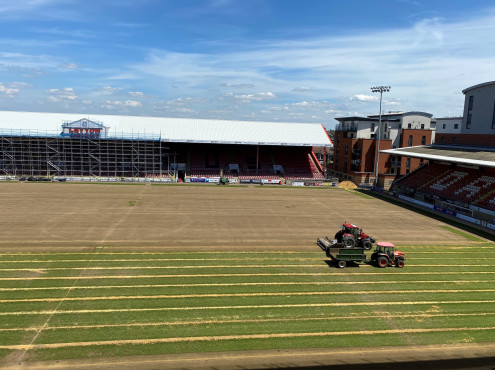 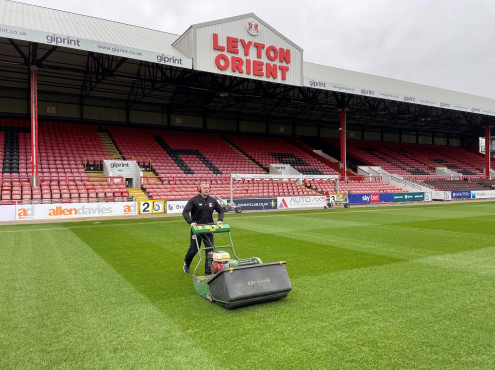 The hiring out of the pitch for corporate purposes after EFL games are completed is a valuable income source, but it does eat into renovation time. Colin has to plan the timetable for this in accordance with time available and of course the budget he is given.

“I will will have detailed meetings with the club Chairman and CEO, and lifelong club supporter, Nigel Travis, before briefing the contractor,” said Colin. “Last summer, we had under five weeks from getting the seed in the ground to first kick-off, a friendly against neighbours West Ham. I’ve never known such a short turn round period, but we did it.”

“This summer, we will have the whole surface Koro’d, as always, and probably add some Fibresand to strengthen things. I’ll be talking to Mansfield Sand about this in the coming weeks. We may also take a look at further drainage improvement.”

“We’ll re-seed with Rigby Taylor’s R140. I’ve used it for many seasons now. It’s quick to germinate and produces a full and resilient surface for us. I also find the company’s range of Microlite granular fertilisers sustains the pitch well through all the demands put on it.”

What is also happening this summer, says Colin, is an upgrade of the stadium’s floodlighting to Championship standard. It clearly shows that, on and off the pitch, Leyton Orient is a club with ambition. In Colin’s words ‘wheels are definitely in motion’ for that pitch upgrade too, so it’s a space to keep an eye on.

Colin recalls the club’s involvement in the future of the Olympic Stadium after the 2012 Games when rivalry with big gun neighbours Hammers and Spurs overheated somewhat. In his early days working for the Os, it was seriously hoped that the club might move there. It was during the time of Barry Hearn’s Matchroom ownership, and the entrepreneur most known for his snooker involvement saw it as a feasible way of growing the club. 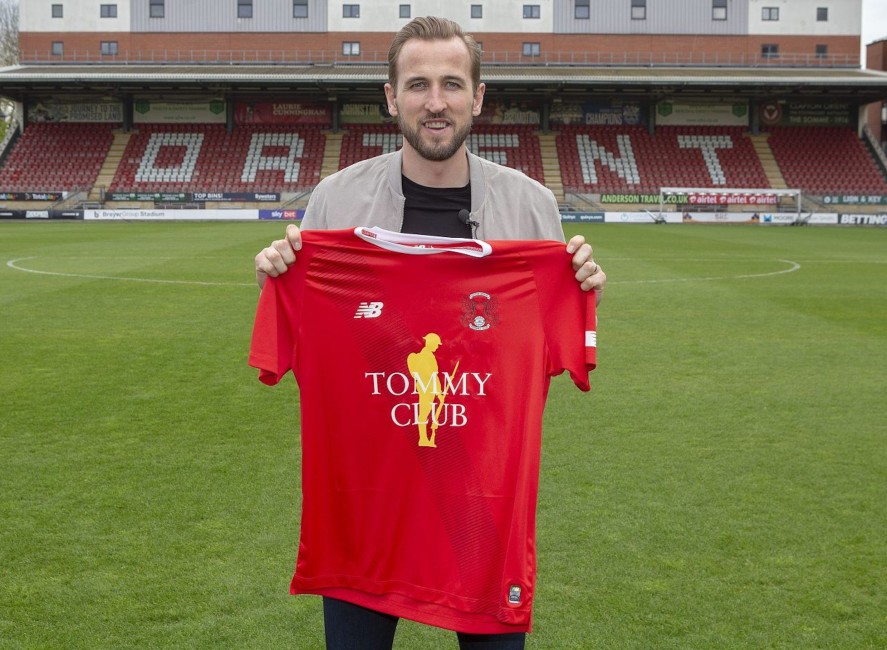 Striking link. Spurs and England captain Harry Kane, who played on loan at the club at the beginning of his career, continues his fondness for it. As Ambassador for the Tommy Club charity, which supports vulnerable ex-military personnel, he renewed his first team sponsorship this season dedicating it to the cause, which raises funds for veterans with physical or mental disabilities. The sponsor’s logo denotes the Christmas truce football match between English and German troops in 1914

“Everyone here was excited and enthusiastic about the idea,” said Colin. “The club was the nearest geographically and such a bold move had a lot going for it. It didn’t have total fan approval and an average gate of under 6,000 in a 25,000 seater venue didn’t really add up, I suppose.”

West Ham – and for a while Spurs – looked further into what for them was a more realistic venture, the former now well ensconced there. The Os held a valid argument that a new, glamourous football venue, with top notch infrastructure and transport links would threaten its own appeal as a place to watch professional football in this part of London. That’s all history now and Leyton Orient has maintained its traditional level of support.

More significantly from a groundsmanship perspective, the rapport Colin has with fellow pros at these two big clubs has flourished. He regularly talks to West Ham’s Dougie Robertson, Spurs’ Darren Baldwin and Arsenal’s Paul Ashcroft about pitch matters. “I can always count on their advice and support,” he said. “There is no rivalry in trying to achieve pitch excellence. End of.”

Colin is also a big fan of Saltex, describing it as just about the best source of ideas and the perfect networking venue.

League Two is what you might call a battleground for 3G and 4G acceptance. Witness Sutton United’s costly sacrifice on promotion from the Conference National League. Where did Colin stand on the future or otherwise of non-grass surfaces in football? 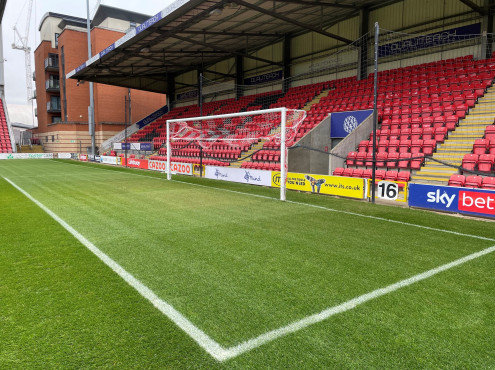 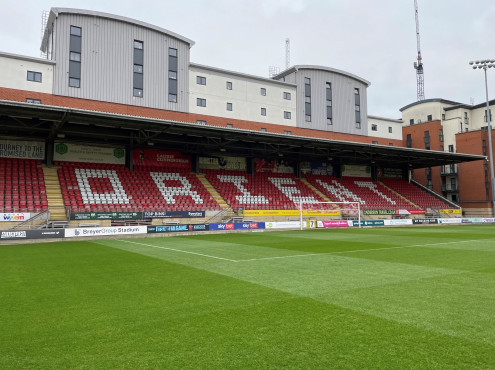 “I can see what sense it makes for non-league clubs, like my own club Welling, to have an artificial surface,” he said. “Installation cost will probably far outweigh expenditure on regular grass pitch maintenance. It also guarantees play in all weather conditions, allows heavier usage for training and by academies, and gives opportunities to make year-round money from hiring out to other clubs and outside interests. At the moment, scrapping it is a price you just have to accept for promotion.”

“Personally, I’m absolutely a grass man. We have the technology and materials to produce playing surfaces way beyond what our forebears did. It’s grass all the way for me.”

Things at Orient are not too different to that which Colin experienced at his first and only other club Welling United, these days in the Conference South, where he spent fifteen happy years. They are each close-knit club communities, small in numbers – relative to status – where everyone chips in when circumstances demand it.

“If there’s unusually wet weather threatening the pitch and I need help getting covers on and off the playing area, all I have to do is ‘blow a whistle’ and I know there’s Orient people here who’ll drop what they’re doing for the cause,” said Colin.

“It works both ways too. I often lend a hand if there’s a maintenance job that needs a spare hand. There’s a real team spirit here.”

Oh, and did we forget to mention repairing fox damage? Not only do they dig the surface looking for food, they bring in food waste from outside for overnight dining in peace. Colin is always finding remnants and wrapping. They are resourceful creatures and there’s not a lot he can do to discourage them. It’s been a while since Leicester City played at the stadium, but apparently there are foxes using the pitch pretty well every night. It’s a regular issue that Colin has come to accept. Now that’s dedication.