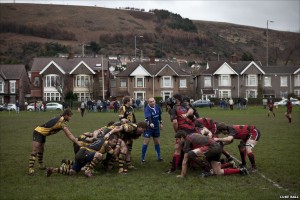 Maintain a height of cut between 30-90mm.

Continue with post match divoting and brushing and undertake aeration if conditions allow. Many pitches will be waterlogged and holding water, so stay off with heavy equipment – a hand fork might be your best friend!

Pitches that are not cut on a regular basis will often exceed 125mm – far too long. The plant becomes weak, straggly and often flattened after play or training.

Continue with post match divoting and brushing and undertake aeration if conditions allow.

If snow does make an appearance, training will either head indoors or on the main pitch. If the latter, ensure that regimes, such as shuffle drills and small sided games are rotated on the pitch to avoid excessive wear.

Try to keep the top 100mm free draining; this can be achieved by regular spiking with solid or slit tines to a depth of 150mm or more.

December brings with it some mixed blessings: the need to contemplate relatives, gifts and cards whilst controlling alcohol intake over Christmas and the New Year. Meanwhile, it can be seen as the low time within the growing calendar which can be a tricky time to navigate from a disease and weather perspective.

I don’t need to remind you how wet it has been, almost from the end of September, though it’s useful for us to think about the implications of all that water for both the plant and for the substrate it’s rooted in.

The need to take a breather

Much of the life that we are familiar with uses oxygen in a process called respiration, and that includes microorganisms within the soil. Conventionally a well-structured soil will contain roughly equal parts of water to air contained within the pore spaces. This provides an environment for organisms such as worms, fungi, algae, protozoa, bacteria and nematodes. Some of these are mobile but many have restricted ability to move meaning that the environment largely determines which suite of species can exist – if the soil structure is compacted or waterlogged for periods of time then anaerobic species, organisms that don’t require oxygen, will be the dominant form of life.

Bacteria vary in size from around 0.2 µm up to 10 µm making them a comparable size to clay and silt soil particles (< 0.2 µm and 2-50 µm respectively). They grow and live in thin water films around soil particles and near roots in an area called the rhizosphere. Bacteria’s small size enables them to grow and adapt more rapidly to changing environmental conditions than larger, more complex microorganisms like fungi which tend to prefer more acidic environments without soil disturbance.

Most microbes are generally inactive and may only have a short burst of soil activity. Since bacteria live in difficult conditions they reproduce quickly when optimal water, food, and environmental conditions occur. Populations of bacteria may easily double in 15-30 minutes. Soil oxygen levels often determine soil bacteria activity with most soil bacteria preferring well-oxygenated soils. Examples of aerobic bacteria include the Aerobacter genus which is widely distributed in the soil and actinomycetes bacteria genus Streptomyces which give soil its good “earthy” smell.

Anaerobic bacteria prefer an environment without oxygen. Many pathogenic bacteria prefer anaerobic soil conditions and are able to outcompete or kill off aerobic bacteria in the soil when conditions are suitable. Bacteria populations expand rapidly and the bacteria are more competitive when easily digestible simple sugars are readily available around in the rhizosphere. Root exudates, dead plant debris, simple sugars, and complex polysaccharides are abundant in this region.

So how can we maintain an aerobic soil when the weather conditions are so wet? The answer is that we can’t. As with many things in life the secret is preparation. We undertake renovations at the end of the summer because we have good growing conditions – soil temperatures in excess of 10 °C and consistent moisture, these renovations stimulate the grass plant to grow into the spaces that we’ve created. We’re engineering an environment, around the rhizosphere, that is suited to the aerobic species that we want. Despite this soils that have been waterlogged for long periods of time, because of this wet autumn, will need some additional support to kick-start the development of an aerobic suite of bacteria.

The first principles of first aid are that we do no harm, and that principle also applies to environmental management regimes. If we take machinery over waterlogged soils we are likely to create problems as we compact and damage the soil structure. Ideally whilst the drains are still running, we need to stay off the surface. When the drains stop running the soil is said to be at field capacity. Only when drains have stopped running, and you can start to hear the soil pores opening, should we think about putting any machinery over the surface – and even then we need to be cautious: spread the weight with turf tyres at low pressure.

Aeration should be our next priority, depending on the kit we have and the ability for us to make a mess of the surface we can consider a range of devices available: verti-draining, solid tining, air injection, earthquaking and slitting are all forms that use different mechanisms to reincorporate oxygen back into the rootzone. Different root zones drain at varying rates because of the distribution of the different sand, silt and clay particle sizes. They will determine how quickly the moisture can flow away or how intractable the soil is.

Once we’ve aerated, and if temperatures are sufficiently mild, we can then think about trying to build up the levels of beneficial organisms by supplying them with some readily available nutrients e.g. carbon sources such as SeaAction liquid seaweed or BioMass Sugar. The movement and development of microorganisms will help restructure a soil and maintain oxygen within the rootzone. This benefits the plant which can then obtain nutrients through the activity of bacteria, facilitating good plant health and recovery ability.

We will all have suffered some losses over what is turning into an exceptionally wet autumn for many green keepers and groundstaff. Hopefully a dry Christmas will help us get some much needed air into our surfaces and whilst we’re eating the occasional mince pie we can console ourselves that we’ll be turning that corner in the calendar this month and from the 21st we’ll be starting the steady journey towards what we all hope will be an inspirational new decade.