After a turbulent few years, the future looks bright for the Coventry Building Society Arena – formerly the Ricoh Arena – with Coventry City Football Club set to share the facility with Wasps RFC for the next decade. For Grounds Manager Paul Currier, it offers the opportunity to nurture a pitch that cannot only withstand the rigours of hosting two professional winter sports but also the numerous other events that the stadium caters for. 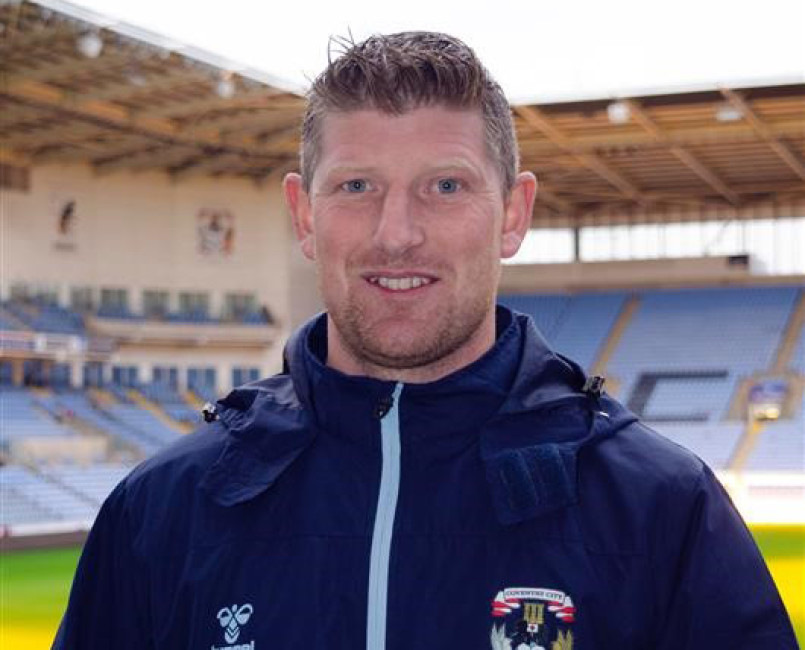 The Coventry Building Society arena hosts two major concerts in 2022, postponed from 2020, plus the Rugby Sevens for the Commonwealth Games. “We always have to bear in mind,” begins Paul, “that it’s not just a sports stadium, but also a venue, so our plan going forward is to have a pitch that will pay for itself in ten to fifteen years.”

Pitch rebuilding has been a major theme through the stadium’s history. The pitch was built using fibre reinforced natural grass some twenty years ago, before Fibresand was introduced, then Greenfields’ XtraGrass system. For twelve months when Wasps had sole use, a natural turf pitch was installed, to be followed by a hybrid system once again, which suffered damage from concert use.

“Although the turf rolls gave us a quick solution, it still could have done with time to settle, but we had to play on the pitch after two weeks,” he explains. “There was some lifting and damage from the scrummages and, due to Covid, we were only able to do a rough renovation. Thankfully, in 2021, it received a full renovation from Premier Turfing as soon as we heard Coventry City were coming back.”

“It was one of the cleanest renovations I have seen,” he recalls, “They were able to take almost all the infill out, and this season it has been a dream, not lifting or moving at all.”

Paul comments that by November, he is usually seeing 40% grass loss, and the period from November to February is tough, but the surface and regime this year have made it a different ball game – quite literally. 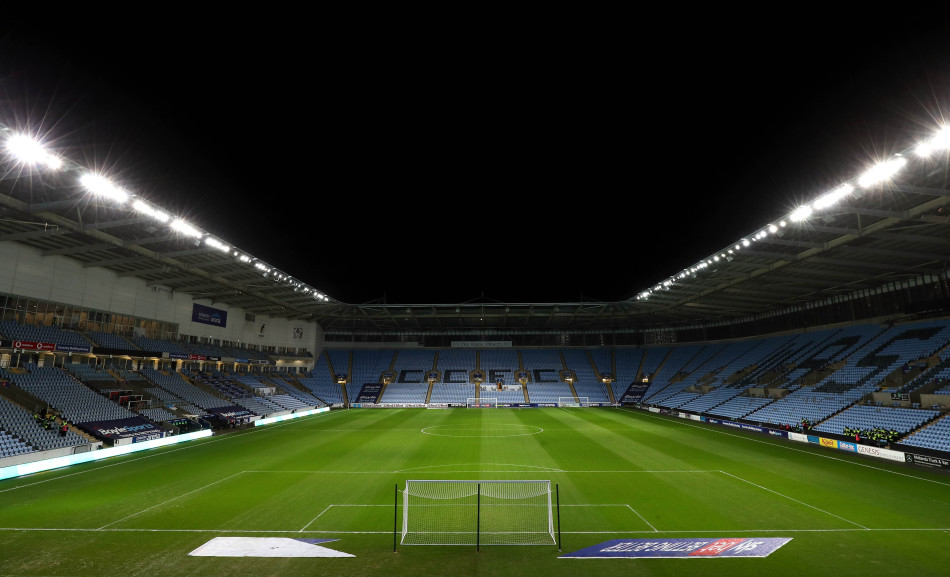 He explains that the Coventry Building Society Arena aims to set a high bar for pitch standards.

“If you are not moving forward, you are standing still. We’re always looking for the latest developments to improve the pitch.”

“A major change is that the management have been prepared to invest in the pitch, and we are working together with a much better relationship between all parties,” he points out.

An example of this is the purchase of eight additional TLS lighting rigs – six TLS 72 and two TLS 9, all controlled remotely via the Turfpal control and monitoring portal – which have made a significant contribution to recovery of the turf after matches.

“We do have the challenge of making it work with a small team however – moving the lights adds to the workload. We try to put them on the pitch straight after a match, or if we have to work on the pitch, they will be on by Monday night.”

It’s a relentless programme. A typical week will see a rugby match on a Saturday followed by a football match on a Tuesday and, in addition to Paul, there is just one full time groundsman at the stadium and one at the training ground.

“We’d aim to put the small rigs on straight after rugby as they don’t need a tractor to tow them, then all of the rigs on Wednesday night.” 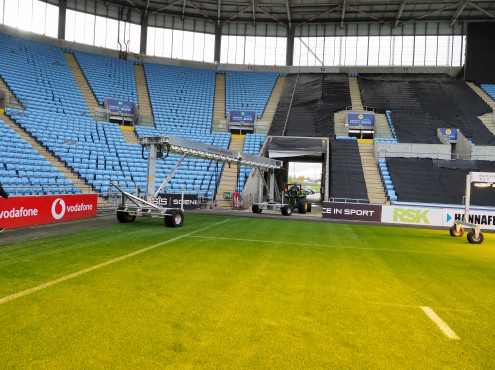 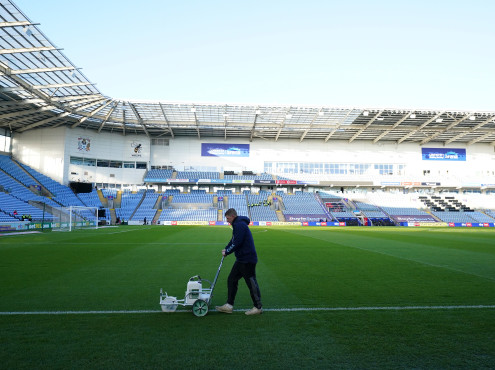 Overseeding is ongoing throughout the winter to continually add grass coverage, and fertiliser is applied every seven days as the pitch base is pure sand.

“I alternate granular and liquid products, but close to a fixture it’s always liquid to avoid leaving prills on the surface,” Paul explains.

Moisture retention is another issue, and here Turfpal also helps. “Data is collected from twelve SoilScout sensors around the pitch, with moisture levels, salinity and temperature displayed on the office computer and a smartphone app,” he explains. “It helps me to read the pitch better and deliver facts to the management, as well as guiding irrigation practice. It also works with the undersoil heating, offering detail such as soil and air temperature. For example, whilst the soil temperature can be 13OC, above the surface it is just 11OC, and having this information to hand helps me to avoid the soil drying out.”

Sprinklers water the pitch for eighteen hours a day, but Paul explains that it’s a fine line between putting enough water on and risking wet leaf. “I have to find a balance to maintain that full grass coverage.”

Technology also helps to get the most out of the investment in the lighting, with shade analysis revealing that the south side of the pitch needs 600 hours of light a month to compensate for shading, and helping to position the rigs.

Post-match renovations begin with cleaning up using the Dennis Pro 34, followed by a light topdress and overseed, followed by fertiliser application and irrigation. 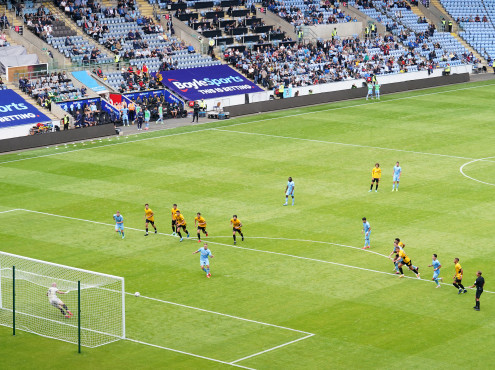 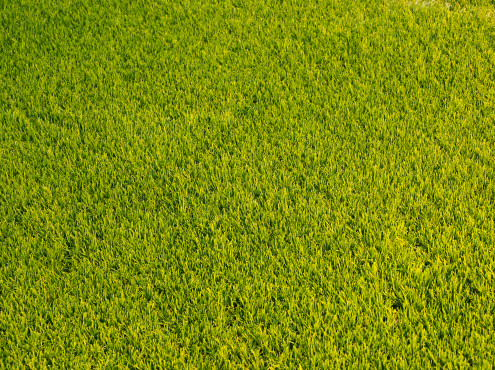 County Turf’s Hero Hybrid Grass knitted construction system withstands wear and tear, especially in goalmouths and penalty area as shown, or where scrummaging takes place in rugby / A highly successful renovation of the pitch in summer 2021 – after Covid hit the previous year’s plans – means a strong sward in the depths of winter

“The aim is to keep the grass growing and then we’ll just top it out. Another benefit of these lighting rigs is that we can work underneath them, and then put some water on to retain moisture in the leaf.”

Cutting emissions is a hot topic, and like most grounds managers, Paul has looked at electric mowers. “We have had some on demo, but the initial cost is a concern,” he says, “and output is more of a priority for now – because of our limited staff resources we have gone from using Honda push mowers to 34in Dennis models which we can also use with a fixed brush on the front to take the dew off.”

2022 looks to be a busy one, with the Commonwealth Games and concert commitments giving just three weeks for renovation. 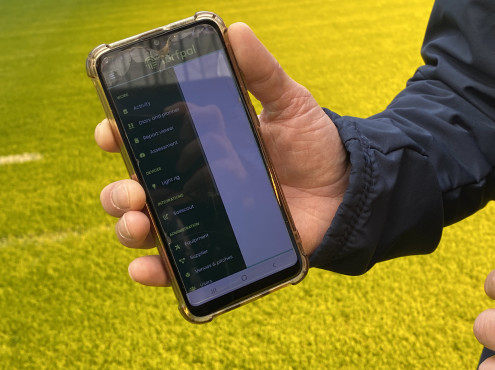 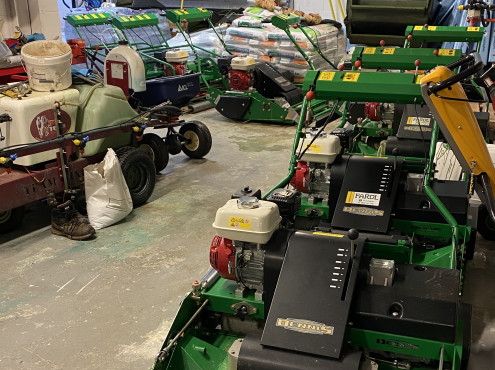 Dennis Pro 34 mowers are the latest addition to the mowing armoury, adding capacity for a slim labour force / The Turfpal app displays reports produced from data collected from 12 SoilScout sensors around the pitch

“I rely on trusted suppliers such as Mark Allen of Agrovista Amenity and Oliver Boys of Turfix, whilst we’ve always used Limagrain for seed. Back up is essential, and we get a fantastic service from TNS.”

“MM60 gives fantastic results, and we’re also using Tetrasport. If you get the right percentage of cover it ticks all the boxes, and the one thing I need is fast establishment.”

Preparations for the Games are progressing well, with the stadium having met the Organising Committee’ requirements so far – the venue also plays host to wrestling and judo as well as the rugby sevens – although further investment will be made in the 2022 renovation ahead of the matches.

“The fixtures are from 29th-31st July, although obviously the organising committee will be with us for longer than that. There’s also talk of constructing a temporary pitch for warming up in the car park, so that’s another consideration.”

It’s clear that long hours and hard work for the small team can’t take the shine off the satisfaction of having made a top level pitch work in challenging conditions, and the peace of mind from a secure future for the stadium at last.

“We’re aiming to make big footsteps in the sand, but it feels like we are getting it right. Coventry City’s priorities were coverage and levels, and if you get the coverage right, the levels are protected. Wasps have made this their home, and the plan is to keep going forward.”