There are not too many golfing establishments that can say they are part of a country estate dating back to 1674 but Blackwood Golf Centre in Northern Ireland is certainly one of them. Chris McCullough visited head greenkeeper Jonny Eager to discover how he manages looking after not one, but two, 18-hole golf courses. 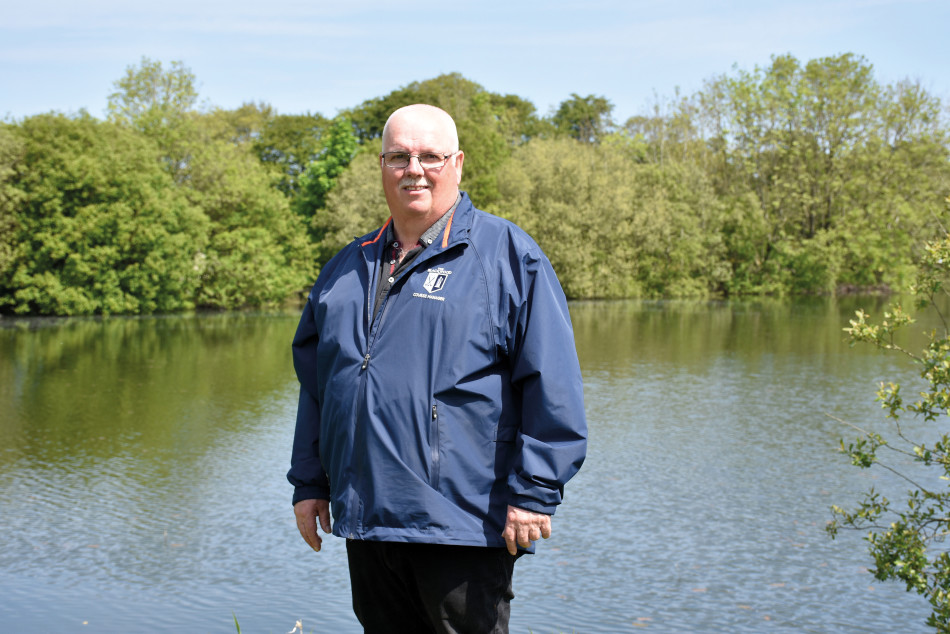 Tucked away gently into the rolling countryside just over ten miles south of Belfast sits the expansive and historic Clandeboye Estate, first settled way back in 1674.

Through time the estate, under the ownership of the Dufferin family, developed into quite a conservation zone incorporating the largest area of broadleaved woodland in Northern Ireland.

As well as that, the estate today boasts a large dairy farm producing its own brand of yoghurts, a picturesque courtyard wedding venue and is home to two 18-hole golf courses.

These two courses, namely the par 54 Temple course and the par 71 championship Hamilton course, stretch out to cover 240 acres and service the needs of the Blackwood Golf Club, albeit under separate identities.

Set in beautiful woodland lined with gorse and water features, the Hamilton course provides spectacular views of the Clandeboye Estate and Helen’s Tower. Each hole is unique, demanding different shapes of shot with water features coming into play on eleven of the eighteen holes. USGA greens provide challenging slopes and undulations while making the greens a pleasure to putt on.

The signature hole, the 166 yard Par 3 12th, is a picturesque yet demanding hole over water, providing a stiff examination of the tee shot. There is a diverse range of wildlife all over the course including a family of swans breeding for the last few years.

Moving over to the Temple course, it is an 18 hole Par 3 course which acts as a mini version of the full course, the Hamilton, including bunkers and water hazards. 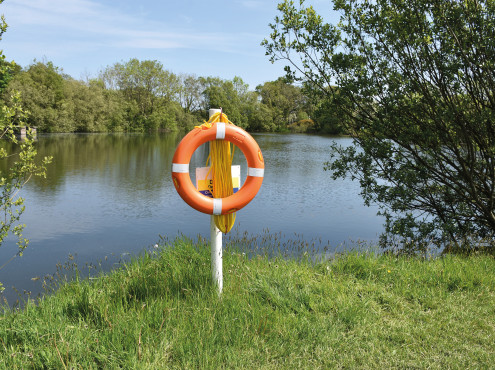 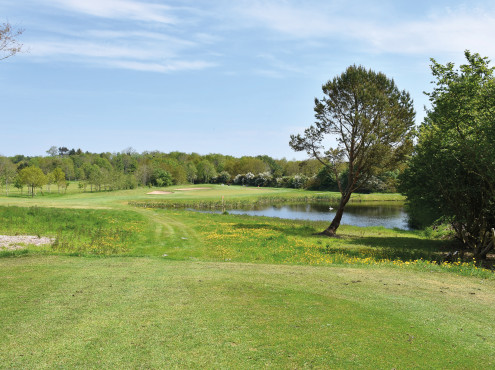 Set in woodland, lined with gorse and lakes, it provides good opportunities for the more experienced player to hone their short game whilst remaining a challenge for beginners. It is also a comfortable walk for the more mature golfer.

The Blackwood Golf Centre provides golfers of all ages and abilities with various facilities to improve their skills, including a floodlit and covered twenty-six bay driving range.

Outdoor practice areas include a short game facility and putting green with a testing sloping surface to best replicate the USGA greens found on the course.

The man tasked with the enviable job of looking after the courses is Jonny Eager who has pretty much followed in the footsteps of his father and other family members into the world of greenkeeping.

Jonny has been working at the Blackwood Golf Centre for the past twenty-eight years, and had previously worked at both Clandeboye Golf Club and Knock Golf Club.

Jonny said: “I’ve been working here at the Blackwood Golf Centre since just after it was first constructed in 1993. It was my late father Hugh who led me into greenkeeping as he was the head greenkeeper at the Clandeboye Golf Club and Fort William Golf Club in Belfast.”

“I worked alongside him and later qualified with my NVQ level three in sports turf management. Now, I have over forty years’ experience in the industry.” 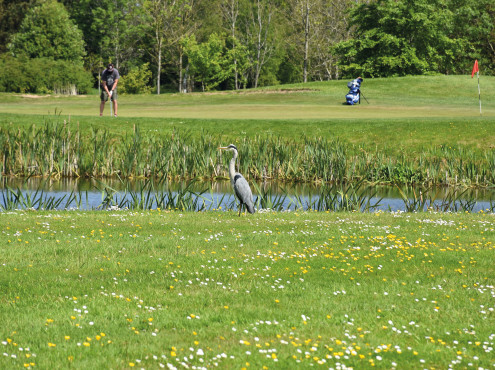 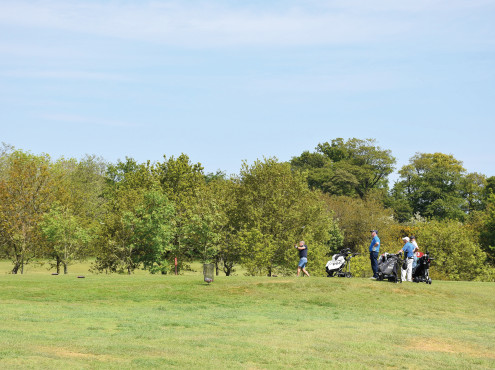 Jonny looks after the two courses at the Blackwood Golf Centre ably assisted by his team of seven full-time and three part-time staff. As Blackwood Golf Centre is a proprietary owned business, Jonny is in direct contact with the owner to decide on budgets and to discuss any new projects on the horizon.

“The Hamilton course is the bigger of the two courses taking up around two thirds of the total area we have here,” said Jonny. “I have an excellent team behind me, four of which are also long-term employees here. My second in command, Andy McDowell, has also been working here since the centre was opened.”

“We carry out the majority of the work on the equipment here ourselves as one of the guys, Gordon Leckey, is employed as our dedicated mechanic. The only time we need to outsource any work regarding the machinery is if something major was wrong with the equipment, such as a hydraulic system failing, for example.”

“We also use outside agronomists, STRI Group, and would use external contractors for any major work on the grounds such as a new project that required any substantial earth moving,” said Jonny.

Across the courses, the soil profile at the Blackwood Golf Centre is classed as heavy clay. The greens are of USGA construction, and the tees were made with a layer of soil topped off with a layer of sand.

Overall, both courses at Blackwood are very well drained and the centre has its own built-in irrigation systems on the greens and tees which have proved very useful over the past few years.

“The irrigation systems were needed in the drought conditions experienced over the past two years,” said Jonny. “The only other weather problems we have is that the courses would take some time to thaw out if hit by snow and frost.” 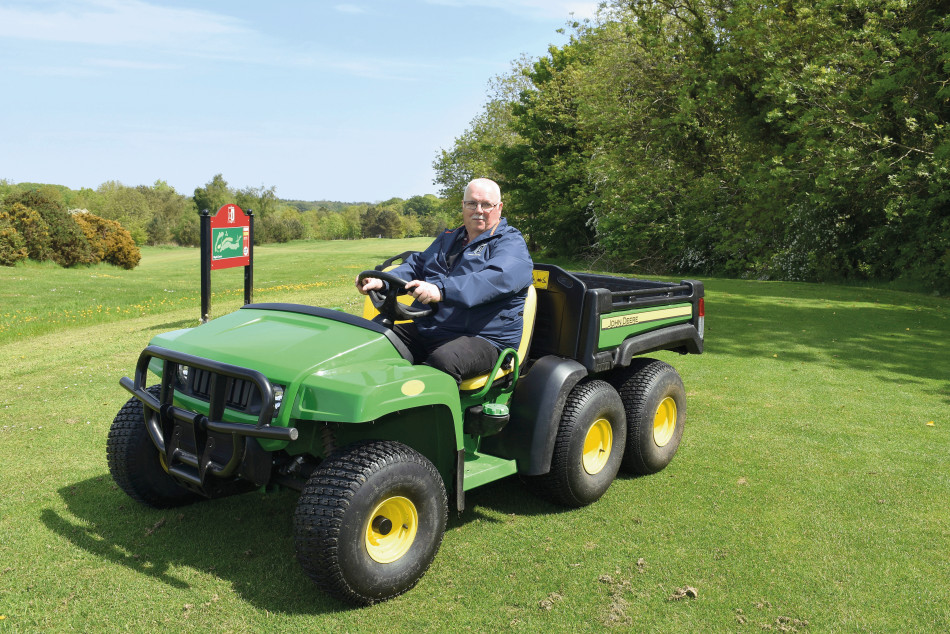 “There are a lot of trees standing along the south and east sides of the courses giving us a lot of shade. If there was frost on the courses then we would use temporary greens.”

“Club members also have access to the twenty-six indoor covered bays on the range and six outdoor. There is also a chipping area with a practice bunker and a practice putting green,” added Jonny.

One of the latest projects at the centre involves the addition of a top tracer system onto the driving range.

“This is another benefit to the golfer at Blackwood Golf Centre,” Jonny said. “Computer sensors track the golf ball when the golfer hits it on the driving range and shows the exact path it took to the destination. This then acts as a teaching aid to the golfer, helping them improve their game.”

With two 18 hole golf courses comes a lot of maintenance over the year but Jonny and his team have dedicated programmes in place to ensure the courses are always looking at their best.

“The greens are cut daily and the tees and aprons are cut at least three times per week,” said Jonny. “And the rough is mostly cut once per week but, in some areas, twice per week.”

“I try to teach all the jobs to all the staff so that we have all angles covered when staff take their holidays. The courses have been in superb condition all summer long and that is something the golfers have often commended us for this year.”

“The dry weather in July did present us with a few problems with areas drying out, but everything is back to normal now. It’s been a pretty good year for greenkeeping in my opinion,” said Jonny. 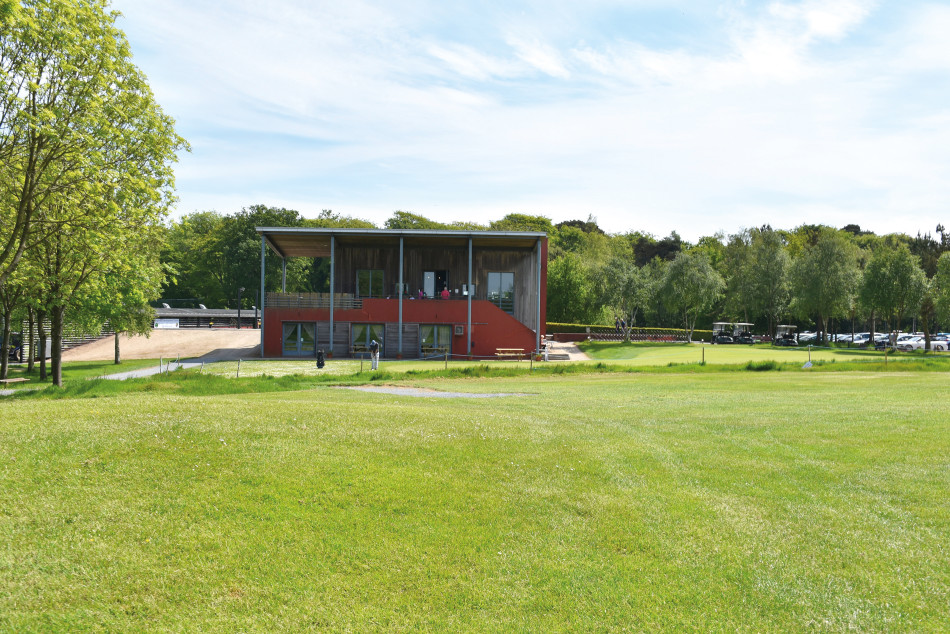 Thanks to the top notch maintenance by Jonny and the team, Blackwood Golf Centre is open all year round for golfers to get a game in. At the end of the main season there are a number of tasks that are carried out in preparation for winter.

“We autumn overhaul all our greens,” said Jonny. “That means hollow tining or solid tining and deep scarifying, as well as overseeding and topdressing. Our tees are verti-drained and sanded along with the aprons and surrounds.”

“Then we would use a Shockwave down the fairways in the winter months. This is deep rotating knives that sends vibrations down into the ground. It reduces the soil compaction, improving the soil aeration and revitalises the fairway. We carry this out in-house as part of our normal maintenance plan,” he adds.

Jonny has noticed the climate is getting wetter as the years go on, but says he can adapt the maintenance programmes to suit the conditions.

At Blackwood, the golf club is a separate entity to the golf centre and there is always good communications between the two, via emails and whatsapp groups, as to how the courses are playing or any other important information that the members need to know.

Jonny also has plans to carry out some extra work over the winter involving a new tee and other practical jobs.

“We are going to build a new tee at the twelfth hole,” he said. “And, we are going to carry out some drainage work on the fifteenth. Also, we are going to fill in three of the bunkers and drain some wet areas beside the eleventh and eighteenth greens.” 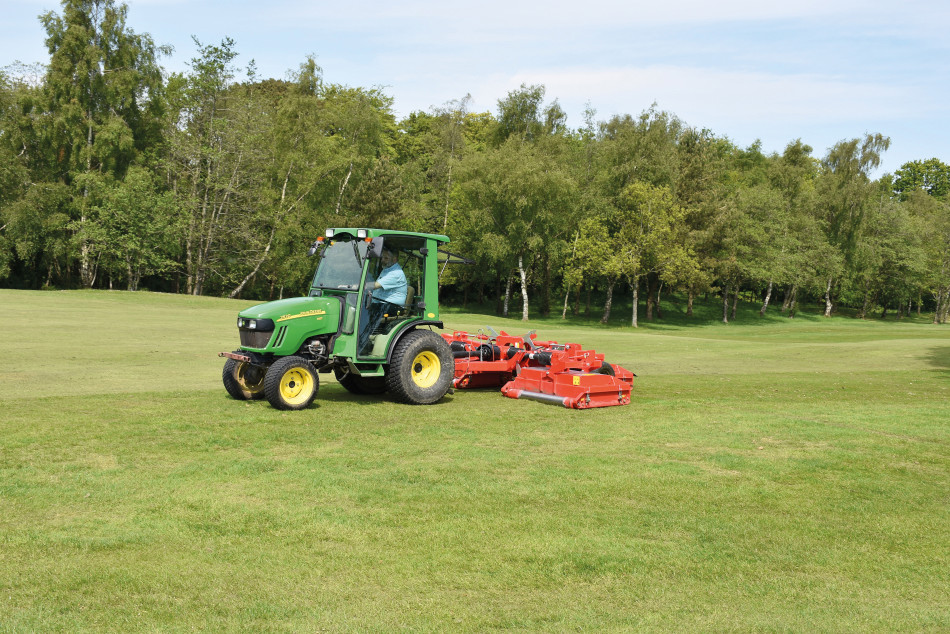 “There are five lakes on the two courses which help provide good drainage and one of them supplies the irrigation system as well,” points out Jonny.

In addition, Jonny has a wooded area that has to be maintained as well. During the construction of the courses in the early days there were 14,000 trees planted between holes that have to be thinned and looked after.

“Four of our lads are suitably trained on the use of chainsaws, so we can carry out most of that work ourselves, but obviously if there was a job that was above our capabilities we would bring in an outside contractor to do that,” said Jonny.

Most of the weeds around the courses are the broadleaved weeds which are controlled by selective weed killer treatment.

“We struggle with some pests, mostly worm activity, which are a big issue now on parkland golf courses because the use of pesticides is now forbidden in this area.”

“Now, we have to use sand and some iron to acidify the ground to try and control them, but it can be like fighting a losing battle. There is no real cure for trying to control them now.”

“There is also a lot of wildlife on the course including rabbits, foxes, badgers, stoats, deer and plenty of birds. They were all here before us so we just have to live with them being there,” he said.

Staff training at the centre is ongoing and an outside company is regularly brought in to update Jonny and the staff on health and safety regulations.

“At the minute, I think greenkeeping is struggling as an industry and it is hard to get new entrants to take on this job as a career. I know a lot of courses are only getting one or two replies to any jobs they have posted. I think it is the weather that puts people off the most about coming into this industry, rather than pay and conditions,” he suggests. 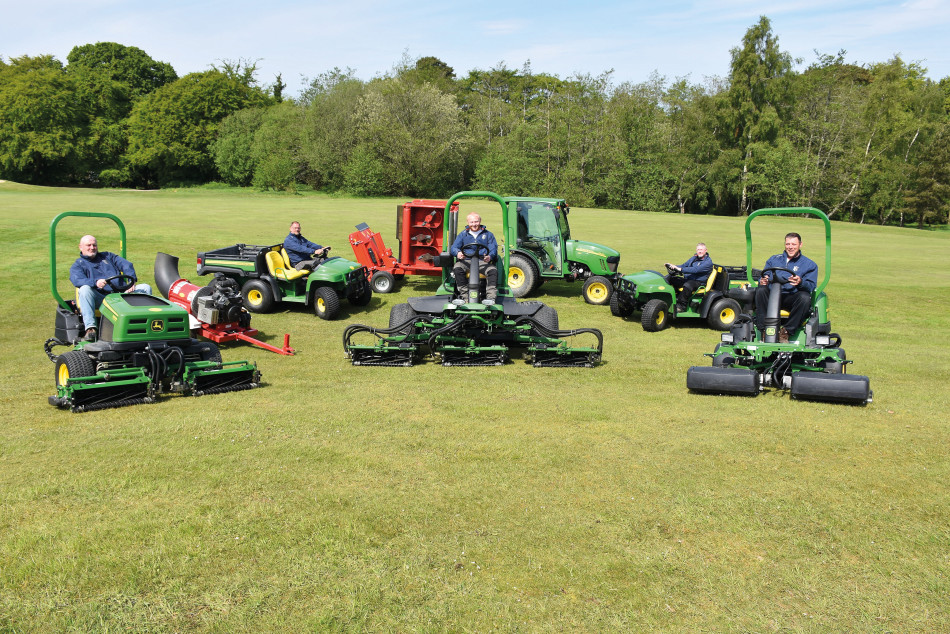 There is a mixture of brands in the machinery shed including Kubota and Isuzu tractors, but most of the equipment bear the familiar green and yellow colours of John Deere.

“In terms of machinery that really help us, the John Deere Aercore walk behind aerator is vital for the greens. Plus the Ultraspreader Topdresser is an essential piece of equipment that has made topdressing possible via a one man operation now,” said Jonny.

Also included in the purchase was a Trimax Snake articulating rotary mower and a Buffalo debris blower.

Jonny said he is very pleased with the new equipment, explaining how the machines have boosted production and efficiency.

Jonny said: “We have been using John Deere equipment at Blackwood since 2003 and have always found the equipment very reliable and easy to use.”

“With this new deal we replaced two of our older John Deere Gators with the TH 6×4 vehicles and the rest are additional purchases in our fleet which now consists of twelve John Deere machines in total.”

“The John Deere equipment does a great job and the backup we receive from the dealer is first class. They are very reliable and, we think, represent good value for money and longevity.”