The 2022 Farm Sprayer Operator of the Year says the technology packed into his John Deere R962i has simplified applications without compromising on the size of the tank. 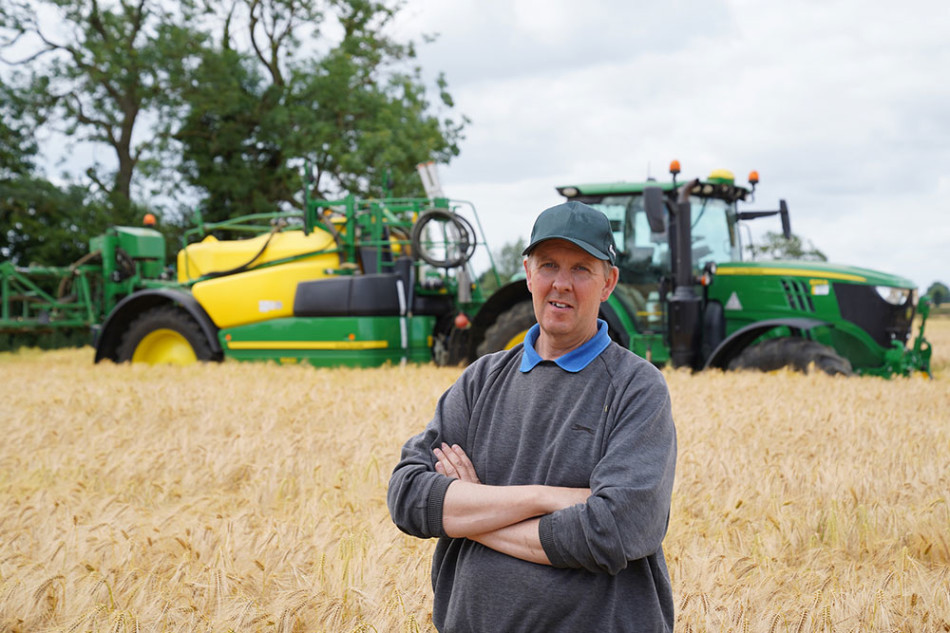 Steve May, arable foreman at Fromant and Sanders in Kislingbury, Northamptonshire, has a 6,200-litre tank and 36m boom on his trailed machine, pulled by a 6215R AutoPowr.

The biggest trailed John Deere sprayer available at the time of purchase in 2019, Steve opted to stay loyal to the brand after being impressed with his previous model, the M740.

“The R-series sprayers are already high spec, so a lot of the features I needed came as standard,” he says. “This is our third John Deere sprayer, but this one was a big step up in terms of technology, size and width.”

Twin Select nozzles, one fixed and one quad rotating, means that Steve can alternate between them from the cab, cutting down on the manual changes.

He has been particularly impressed with the PowrSpray system, which boasts separate pumps for filling and spraying. “The filling system on this sprayer is just fantastic,” he says. “The filling pump has a 1,200-litre/min capacity, so I can fill the tank in around five minutes,” he explains.

Setting how much water he wants on the screen, Steve can depend on the system to fill the sprayer on its own, and he has the option to use the ‘active pause’ function to slow the speed of filling while the chemicals are added.

Altogether Steve sprays 810ha, which is split between the home farm and contracted work and crops grown include wheat, barley, oats, oilseed rape and beans.

“The tractor and sprayer both being John Deere means everything is integrated really nicely, which makes my life easier,” he says.

“I use the tractor’s Greenstar RTK guidance to put the tramlines in, which means I can spray everything with autosteer,” Steve says.

Previously, Steve worked on SF1, meaning he had to correct the guidance lines as he worked. “Now they are perfect throughout the season,” he says.

Overall, Steve has been impressed with the R962i’s performance.

“The technology is very clever but on a simpler level it’s easily manoeuvrable for such a large implement, and the axle suspension smooths out the ride.”

Steve has been so impressed that the farm has already placed an order for John Deere’s new R975i which has a 7,500-litre tank and is expected to arrive on farm in time for 2023 spring spraying.

“It’s pretty much the same machine, it just has a bigger tank which will give us a bit more capacity, particularly in the autumn when we’re doing pre-emergence,” Steve says.

“We’re putting 200l per hectare on when we’re spraying pre-emergence herbicides so obviously the more liquid I can get in the tank, the further I can get around in a day. “I think the new sprayer comes in somewhere around 90 acres per tank load, whereas our current model does 75 acres per tank load.”

Tank size is key because he needs the capacity to avoid having to make journeys back to base to refill.

Although there are a couple of satellite water tanks at his disposal, not having to rely on them so much will provide a significant time saving.

Steve fought off stiff competition to be named Farm Sprayer Operator of the Year, securing his win after impressing the judges in all three rounds.

“It’s not really about driving a tractor or sprayer – it’s about having the knowledge and ability to do the best job you can with what you’ve got,” he explains.

“The judges focus on how you set up your equipment, processes and paperwork to be as precise as possible, because this leads to efficiency, which in turn leads to environmental gains.

“Finding out I had won was fantastic.”

Steve is BASIS and FACTS qualified, and made the final six of the Syngenta-organised competition in 2018 but 2022 was the first time he has taken the top prize which includes a trophy and a trip to Agritechnica 2023.